My Desperate Sorcerer’s group split up before we can continue and I absolutly wanted to GM Sorcerer. After a few of S/Lay W/Me sessions with Laura where we tried different ways of “playing loose”, we wanted to play a Sorcerer and Sword game. Furthermore, Sorcerer & Sword states explicitly that it’s good to play with only one player.

I was kind of fascinated by a dark Grimm orientation and we selected a biography together in this way. Laura didn’t read so much sword & sorcery and I’ve read it only long time ago so we added the classics. We’ve read the selected Conan stories in Sorcerer & Sword, Mythago Wood, Gormenghast, Jirel of Joyri, Elric and Kane. In chronogical order, once finished Mythago wood, we played a game of “Inflorenza” (a very interesting narrative game with a great mechanic) set in this kind of settings and were fed up with this idea. I asked Laura some idea of her character and she answered “I want to play a badass queen. Maybe a pirate queen!” I stopped reading Gormenghast which I just started, proposed Laura to read Elric and finished Kane’s Bloodstone and Dark Crusade. We got a discussion about Jirel of Joyri in I argued that she wasn’t so naïve (like I’ve read on some critics, the girl falling in love with her wannabe rapper), but that the love was the “unnatural curse” of the Dark God, a kind of demonic trade-off for the mean to kill him. We got a bit fed up with the representation of woman in Conan and Elric, but Kane’s Bloodstone really inspired me.

Anyway, I asked Laura to create her character and she chose:

A small discussion lead to these elements: Demons = “erotic and disturbing”, Color = “Archipels in an azur sea”. “Azur”, her character, would be part of an ancient dominant civilization with some rare survivors leaving in strong rivalry, “highlander style”. She was part of a warrior caste. When asked about her bad reputation, she answrs that she’s not recognized by the local aristocracy as she “gained” her title and not inherited it, and the inhuman race has let some bad memories. Also she destroyed a community with a tempest and people remembers that. Today, she leads a whole flotilla of competent pirates that leaves on an island she controls where ships are raised from the sea by complex network of pulleys.

We talked a bit about the settings without trying to go to far. We checked the methodology of the Azk’Arn setting in the Sorcerer & Sex supplement for that.

I refrained myself to came with my own ideas and let Laura’s answers show the way. The world is full of archipel and “land” is the wealthiest resource. Water is one of the most precious resource in the salted and poisoned sea world. Lands are covered by dense jungles inhabited by weird and brutal (demon) beasts – Kane’s Bloodstone’s Kranorril style or Conan’s Queen of the Black Coast’s style. To leave on a City on the ground, one has to bind/pact/deal with a powerful demon linked to the city (we couldn’t refrain inspiration from bloodstone and Az’ , and we didn’t want to define too much bfore the character) which can activates the cities defenses, and “control” local beasts (as in bloodstone), or at least make them go away from the city. These cities are all ruins of the ancient inhuman civilization from which Laura’s character comes from. These reactivated fortress cities are the “civilization” with a hierarchical nobility. “Barbarism” is how these cities call another type of social structures, more egalitarian and leaving on whole floating cities made of ships on the sea.  These ship-cities are unbuilt and rebuilt on the sea according to needs and are complete flotilla. They elect a military leader but that’s the main social hierarchy, everything else relies on clans and they deal with sea creatures and elementals, demons “beasts” leaving in the sea with whom they can sometimes deal some pacts. Also, we are in world that has been submerged, so there’s whole ruins of older civilizations in the deep sea.

When asked, “you’re leaving the life you always wanted, what does it look likes, and how your demon helps you with that”, Laura answers that she wants to be the queen of a city.

We than play the sorcerer’s game in Marseille and got some new insights about the game.

Asked about her Demon, she says her demon is big demon-ship that : gives her an Aura of Majesty leading people to worship her as a goddess, let her control the elements, the tempests and the winds, can transport her to a safe location particularly when in a dangerous situation, makes her an incredible supernatural warrior who can almost crushes anybody else, can sees in the eyes of somebody else and gives her hints or visions of the future. I translate this into the following powers: Hint, Travel, Vision, Transport, Perception (else’s eyes), Cover (Children of War), Big, Armor, Confuse, Hold, Cover (Majestic Goddess), Psychic force, Warp. We still have to define the need and desire of the demon.

Asked about her kicker, Laura defines that “Somebody else has just risen a city from the sea, in front of mine.” We went for this diagram. 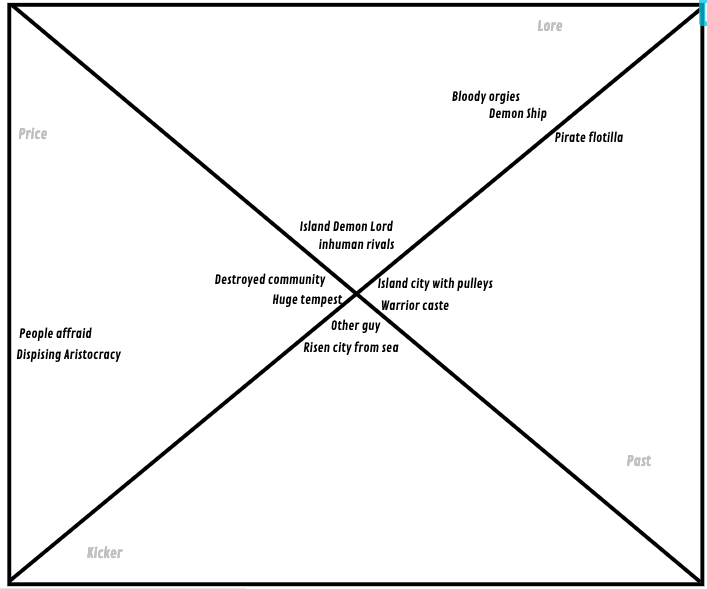 Now we’re about to play and I feel some doubts in the actual development that I’d like to share to have feedback.

Now we can’t wait to play but it would be great to have feedback and correction before starting the game!

I think I can retain this from our Shadow & beauty in Marseille’s game: