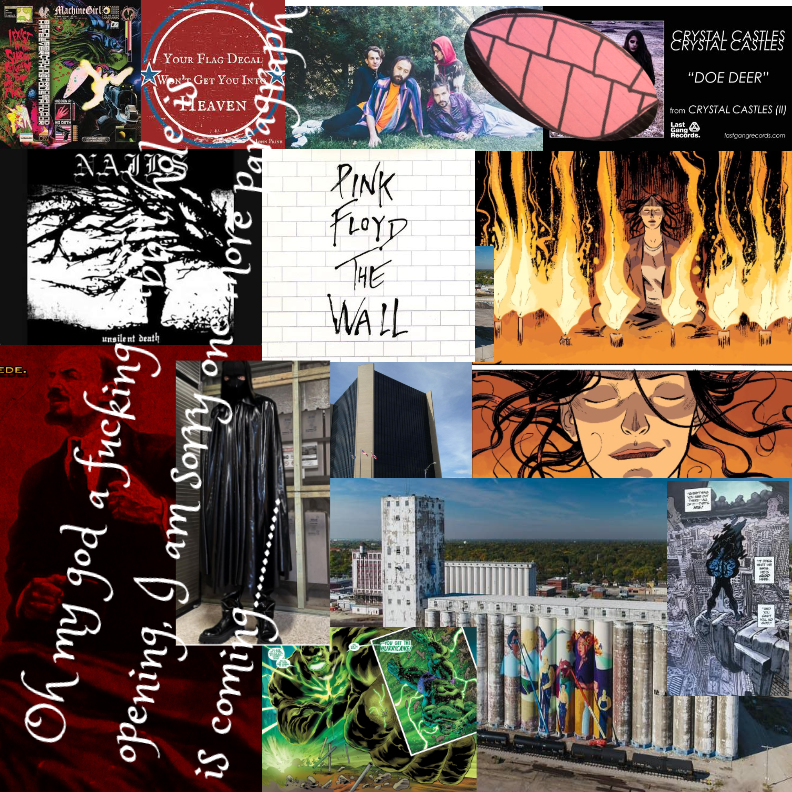 I’ve been fortunate enough to play six sessions of Champions Now with Sam and my brother Seth. I decided to refrain from writing a report until we’d seen the Now crest and crash a couple of times, and our last session brought our first arc to a conclusive, explosive end.

Seth’s Hero is Cochise Thunderhawk (styled “The Wanderer” by Wichita media), a Comanche oddball with martial arts expertise, a spirit companion prone to playing solitaire and giving vague spiritual advice, and a range of mystic abilities including the ability to project shadow-monsters (Images) and always-on mind-reading (Telepathy). As you might guess from this last power, he’d really prefer to be by himself in the woods, but he’s been compelled into action to try to keep the law from coming after his family. One of my favorite details is that Cochise has never seen his spirit companion full-on, only out of the corner of his eye.

Sam’s is Lilith Rose, a trans Communist revolutionary with the ability to metallicize, merge with metal and morph her body into a menagerie of (often monstrous) shapes. Her dad (dependent NPC) is a former supervillain, The Maw, now a somewhat abrasive fellow with physical disabilities—the possible legacy of his former life—and a collection of storage lockers spread across town with who knows what secrets locked away.

Lilith’s Hunted situation was the primary antagonist for this session. By day, he’s Daniel Bloomfeld, Chief of Wichita PD. By night, he’s the Black Sun, a (more) fascist super-cop who I described visually as “What if Tony Stark forged a Batsuit.” His badge (Focus) is a nuclear, glowing blue, neo-Nazi black sun symbol, blue veins spreading lightning-like across his body.

My favorite aspect of (to use the game’s terms) ‘receiving the gift of this character sheet’ was building a DNPC for him: Catherine, his lesbian daughter and a queer-rights and Black Lives Matter activist who owns the leftist communal home Lilith stays at.

Playing Catherine has been a delight, exploring the positionality and nuances of someone with the best of intentions and experience with some oppression who is still economically privileged and trying (sometimes successfully, sometimes not) to deprogram from her conservative upbringing.

(Character sheets for Heroes, Villains and Hazards are attached below.)

The session was a straightforward showdown.

In the previous issue, our Heroes had fed misinformation to Wichita PD, giving away their position and setting up an ambush in one of Wichita’s rusted-out industrial districts, every third building a working car repair shop or metalworking outfit, every other building an abandoned factory.

Lilith and Cochise posted up at a run-down grain silo, Lilith three stories up on the roof to lure the cops in, Cochise in the shadows below setting up an ambush.

Unfortunately, Lilith failed her Security Systems roll, so they didn’t quite get the tactical advantage they wanted. The Black Sun entered the fray first, climbing the ladder to Lilith’s position. Cochise was still on the ground when Bloomfeld’s lieutenants, The Black Sun Knights, officers uniformed like him and armed with nuclear-powered taser batons plugged into their badges, emerged from the shadows and surrounded the silo, effectively splitting the Heroes and forcing them to fight on two fronts.

We are a long way from mastering Champions Now’s combat system. I still need to carefully count out the Phases by metronome, it still takes all three of us putting our heads together to keep everything straight. Still, this was the first combat where it felt like we were using all the instrumentation—Powers, Awareness, Special Effects, Maneuvers, environmental features, Situations, oh my!—at one time.

On the ground, Cochise used Concealment and his Martial Maneuvers to bring the pain to the three Black Sun Knights, but quickly realized their armor (Force Field) and nuclear taser batons (Severe) made just smashing them impractical. He shifted to projecting nightmarish illusions (Images) against Ben Olmstead, a Knight he’d already psychically hacked the day before. Ben suddenly believed he was seeing his fellow Knight about to strike his child (not Cochise), and tackled him off-panel.

Up above against the night sky, The Red Star surprised The Black Sun by melting into the silo’s metallic roof when he tried to grapple her, landing a counter-attack that launched him across the gap between bins and cratered him into the metal of the roof. Unfortunately for her, this triggered his sonic crowd-control tech (Flash plus Aura), and his advanced armor (Force Field) meant he could shrug off the damage. He Pushed for a few extra hexes of movement and came back with a Move-Through attack that devastated the disoriented Lilith (Stun).

I’ve said before that Champions Now gives the lie to the idea that combat is somehow opposed to drama and emotion—this game’s combat is fucking choreography. This was the point where our two fights became one, with Cochise watching on helplessly as the Black Sun stomped Lilith’s ribcage into pieces (Destructive attack plus a Push for Piercing). On his go, Cochise used his knowledge of Chief Bloomfeld to trap him in illusion, hammering him with horrific images of injured children, and triggering a psychological meltdown.

As he looked down at Lilith, Bloomfeld saw his daughter Catherine, the violence he’d inflicted on his community and the city’s activists transferred now to someone he claimed to love. He hugged Lilith-Catherine to him, repeating “I’m sorry, I’m so sorry baby, I’m sorry.”

Meanwhile, Cochise was KO’d by a blow from the final Black Sun Knight, leaving him temporarily helpless to affect the situation above. Believing Cochise down and out, the Knight ran after his two allies to try to split them up, shouting “Guys, stop it! Your making your badges unstable!”

On her go, Lilith used her metallicizing powers to compromise the Black Sun’s armor, the gesture almost tender, describing her hands spreading through the plates and cracking them. The metal flaked away, leaving Bloomfeld as physically exposed as he was psychologically.

He missed his Ego roll to pull out of psychological freefall, but did make his Perception check to orient himself, coming a step closer to reality. And, believing Catherine dead and himself responsible, he made a surprise Grab attack, carrying Catherine-Lilith and himself over the edge of the silo in a final act of remorse fused with annihilation.

Below, two things happened very fast: First, Cochise moved to catch Lilith and the Black Sun (requiring a successful DEX check, then a Strength roll with Core cancelling out the Body damage inflicted by the fall). Second, the two Knights who’d been grappling overloaded their already unstable Black Sun badges, and an explosion set electric blue fire to the entire area, tossing the third Knight through the air like a rag doll.

Cochise took a Recovery phase, then snapped the unconscious Bloomfeld’s neck. He picked up Catherine and prepared to flee but, squinting through the flames, saw that the third Knight was still alive. Unwilling to have another death on his hands, he moved toward him. Sam and I excitedly reminded Seth that one of Cochise’s Psychological Situations was fear of fire. Cochise hesitated before the inferno, seriously considering just leaving the Knight, but made his Ego roll and, taking a deep breath, plunged into the flames.

Consulting the Hazards table, I told Seth to roll for Knockout and that Cochise was hit by Flash. Seth shouted “No he’s not! I have Awareness!” As naturally as breathing, I realized that Cochise, trying to find his way out of the inferno, would see his spirit companion full-on for the first time: an enormous bird, wings spread wide, showing him the path to safety and telling him, “You see? I said you would learn patience for these people.”

This capped a session (and a six-issue run) that left the three of us creatively fulfilled and deeply moved. It approached the possibility of a game being “beautiful enough to make you cry buckets and be glad you’re alive.” And this story and its thematic context emerged spontaneously, without any of us being able to take credit for the whole, from the three of us playing our individual instruments to the hilt.

Looking back, we realized we’d not only explored the thematic content of the Statements but also given one answer to Champions Now’s central question: What is a hero?

It is astonishing how much visual content the game’s idiom-first procedures produce on a scene-by-scene basis. I wish Champions Now Wichita were a real comic book in the world I could takes snaps of and show to you, because somewhere in those final pages, between Cochise’s determination and struggle to challenge violent oppression, and the practice of mercy implied in not letting a sworn enemy burn, is a definition of heroism I can believe in.