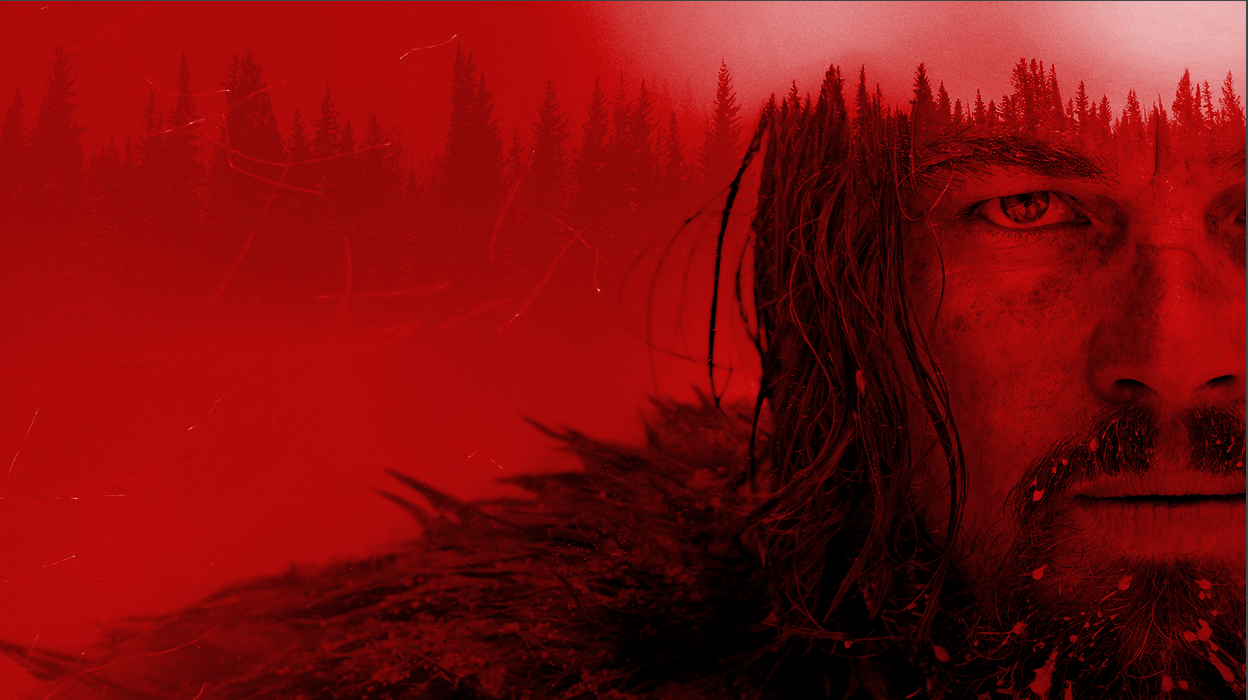 We had our first session of Sorcerer & Sword yesterday!

The pitch was this:

There is a hidden forest valley between the perilous ridges: THE KL’AU.

The only way to reach it is a hard-to-find pass called the Fraustgap, lost in the no man’s land between three civilizations. Rumor has it there are survivors of an old prefecture there, living hard-bitten lives surrounded by harsh, sprawling wilderness. Did I mention necromancy? Rumor has it, it is a nest of necromancy most foul.

Humanity is MERCY and BELONGING.

Check for Humanity gain when you offer mercy (clothing, bread, healing, shelter, etc.) to a stranger; when you offer fellowship to an enemy; or when you restore someone to the home, community, precious belongings, or the identity that has been severed from them.

Demons are the NAMELESS shadows of FORGOTTEN things.

This includes the dead, doomed to Oblivion; the lore and artefacts of Forgotten Ages; traumatic personal memories taking on lives of their own; and savage, hostile forces of nature mingled with cunning pagan things.

Lore is the dim memory of a FORGOTTEN AGE.

A fading echo of the world before it was sundered. Lore is a body of absurd legends, heretical doctrines, and fragmentary prophecies about the Forgotten Age and the age to come. The lore that has survived is often deeply cryptic and esoteric, almost always in dead Old Rumadhic script. Masters or lore claim that it contains coded messages that would be deemed heretical in the Magisterium and Adûn.

Sorcery invokes lore by finding the right words, and speaking written inscriptions out loud, at the ordained places and times, in the presence of blood and fire.

Sorcerers are the pulp fantasy heroes and villains who search out the Nameless, the Lost, and the Forgotten, to master the unrivaled power of the Forgotten Age.

Ghanna and Chaser are two characters we played in another campaign that took place nine or ten years in the future. In that game we learned offhand that they met once before, when they both got entangled hunting necromancers in the wild forest region.

After two sessions of character creation Q&A and sharing, I took Ron's advice and drew the initial diagrams myself, using the kickers and other content that the players gave me. We started our first session with each player doing a show-and-tell with their diagrams to surface any confusion or surprises. 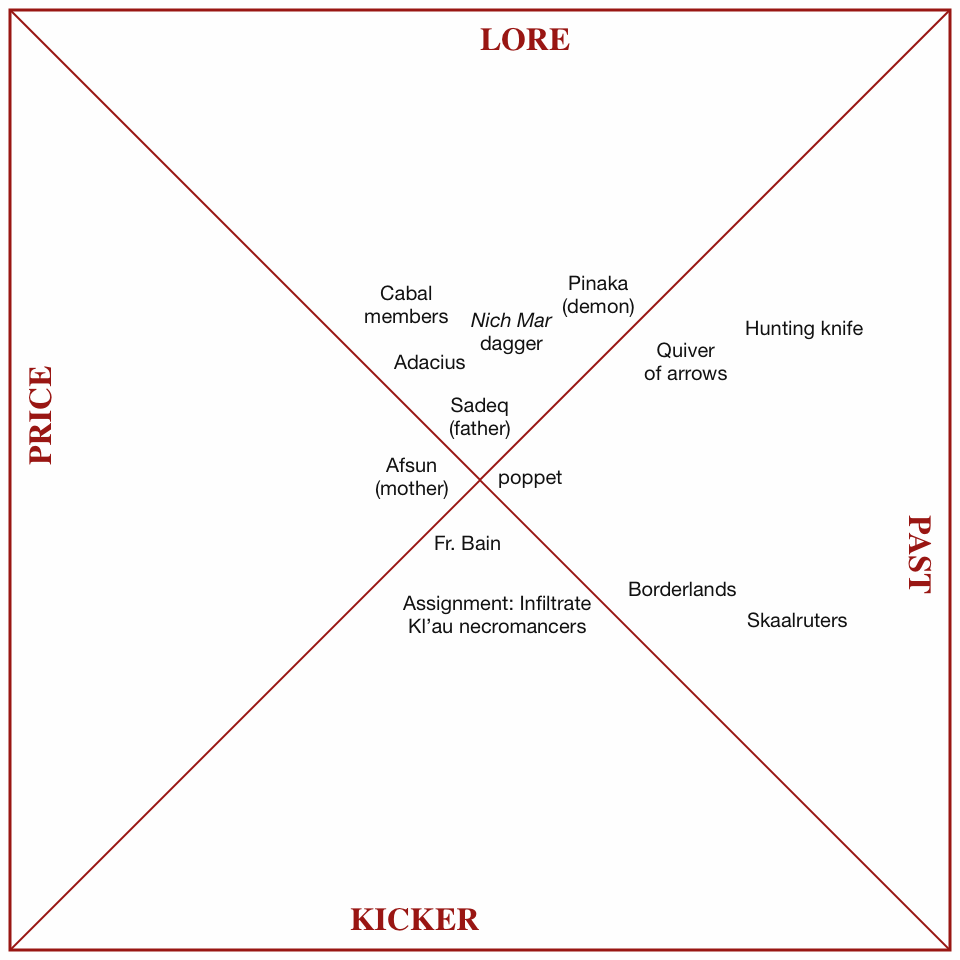 Ghanna comes from a conflicted family. Her grandfather was a priest of the Magisterium who turn his own wife over to the Inquisition as a necromancer. Ghanna learned sorcery from her father in among a desert cabal. But when she saw him sacrifice a sickly child, she reported him to an Inquisitor visiting a nearby city. Her mother threw her out, and she went to her grandfather. Desperate for a sense of belonging and to prove her loyalty to the true faith, she agreed to be his child soldier and spy by infiltrating a ring of necromancers in the Kl'au. 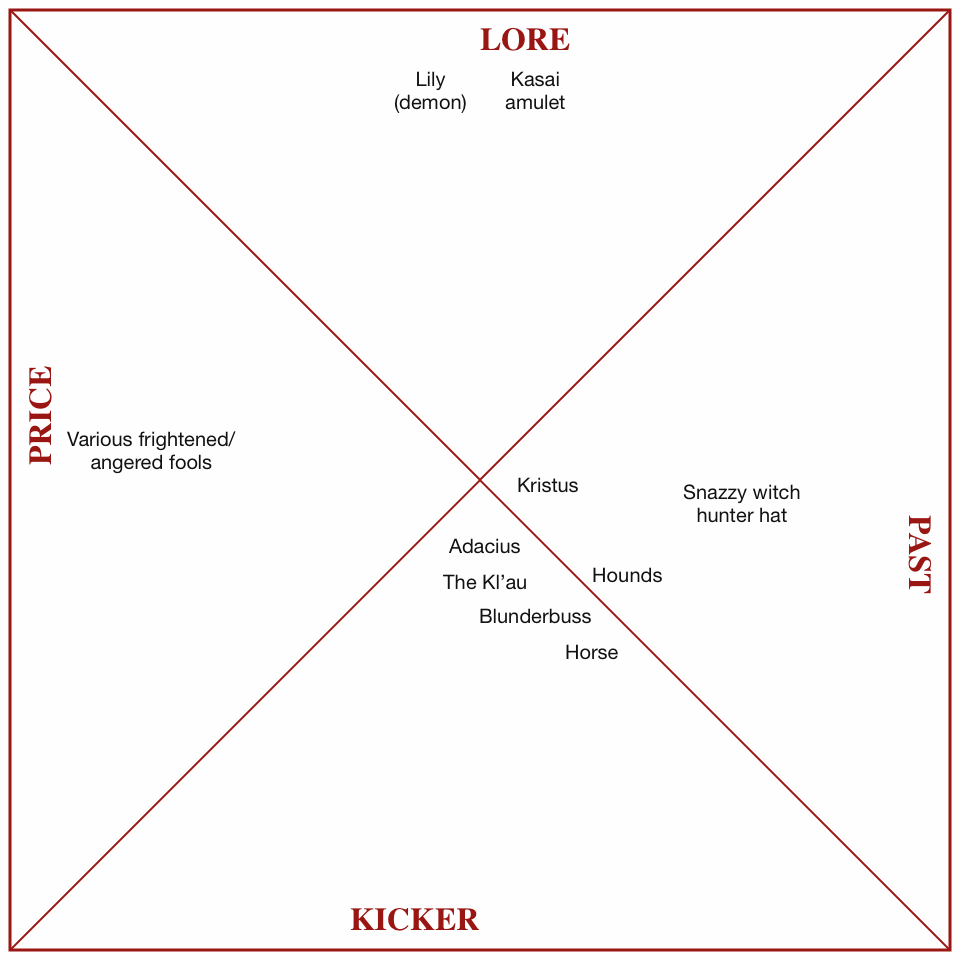 Malcolm Chaser is an Inquisitor and witch hunter whose wife was murdered by witches. He recently got a letter from an operation in the Kl'au, informing him that his own mentor went missing while rooting out the heresy there. He was asked to round up some cutthroats and come there to search for the missing Inquisitor. 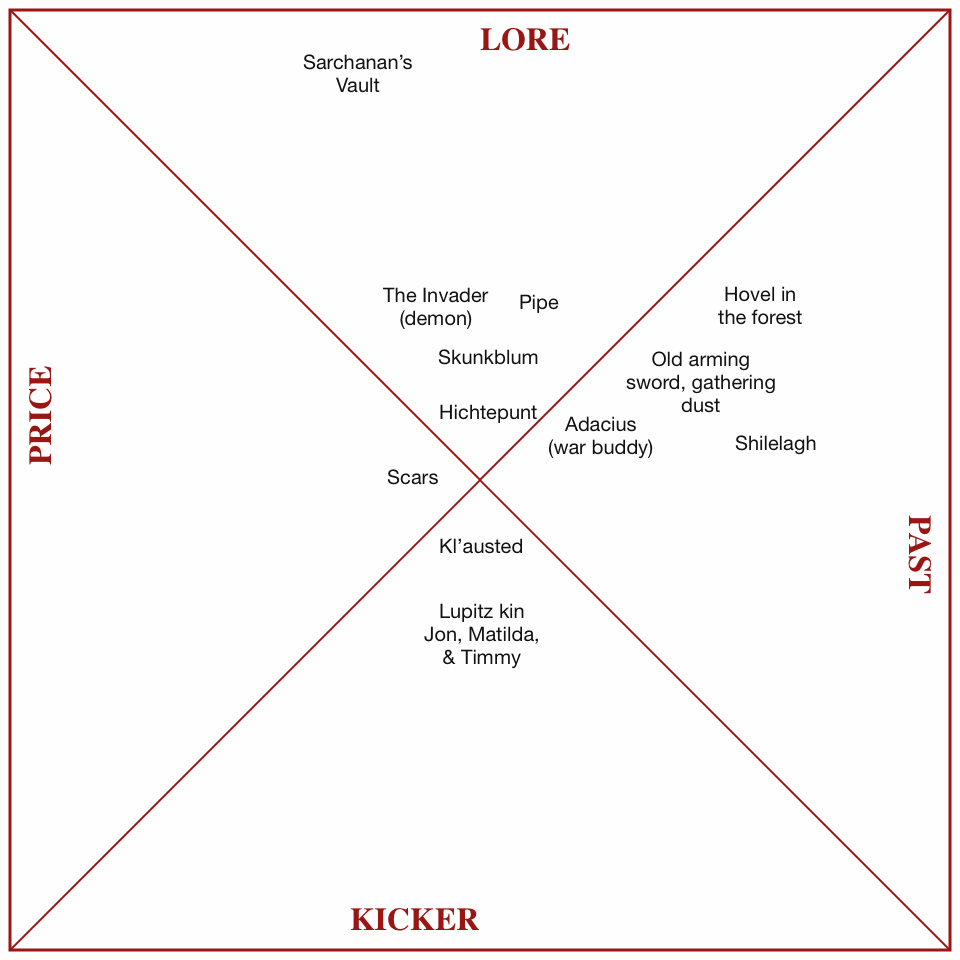 Krenzi Lupitz is a veteran of the endlessly transforming conflict between the Magisterium and Adûn. During his military service, he was captured by the enemy and ruthlessly tortured. When he gained his freedom, he fled to the borderlands to live as a hermit, and never again be caught in the wars of men. He recently learned that his last surviving kin were murdered, provoking him to leave his hovel and find the perpetrators. 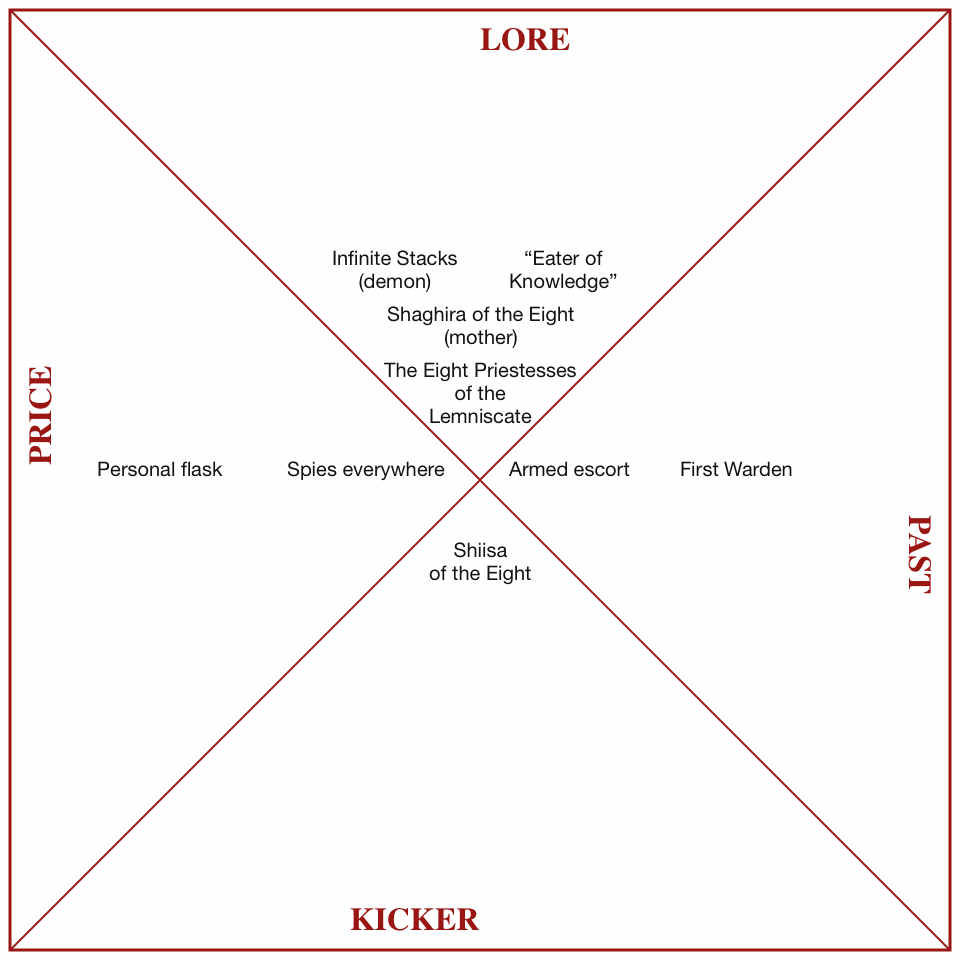 Tulasa is a member of an ancient order tasked with guarding the Magisterium's knowledge. Before she was slain by the Eater of Knowledge, Tulasa's mother surrendered her demon to him—a vast library of all notable history, past and future, hidden in an apparent "pocket universe" accessible only by a key in the form of a sword. Tulasa got a report that a priestess who served with his mother was taken as a captive into the Kl'au, and of course he knows it's a trap laid before him by the Eater of Knowledge. 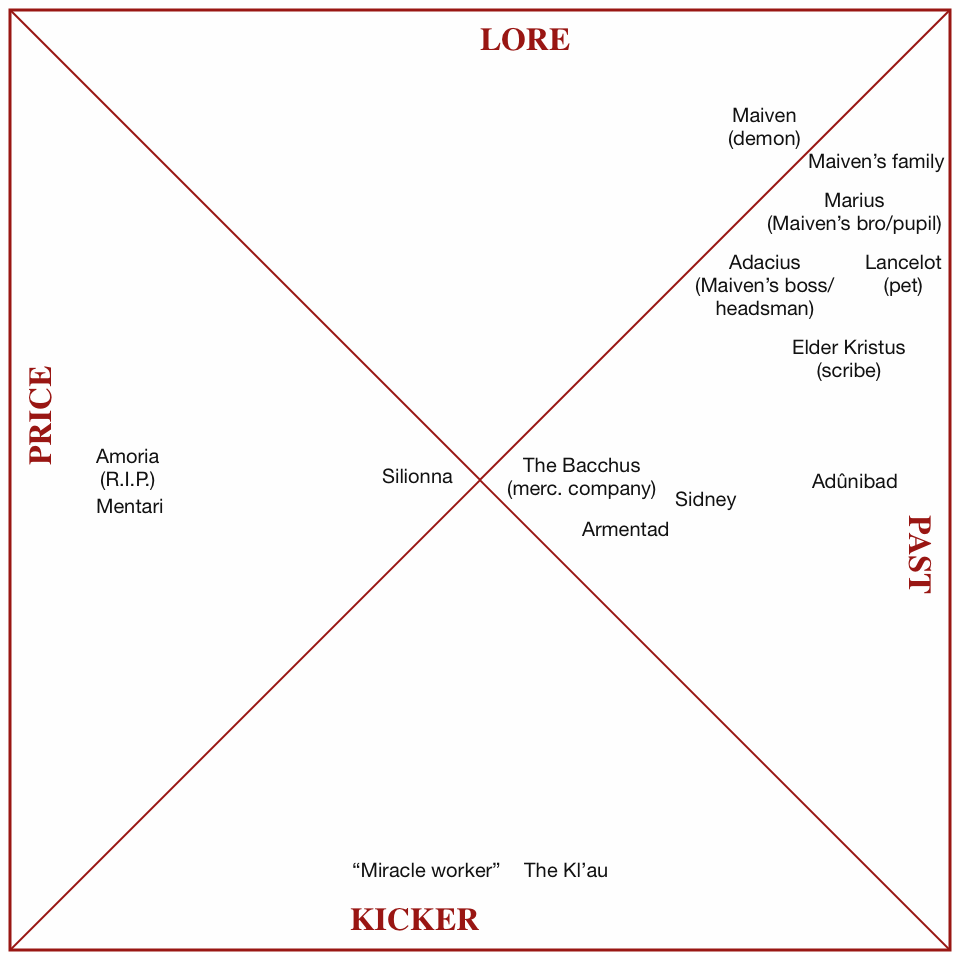 Duke Ahwe is a 500+ year old half-human and therefore undying. The event that severed his soul in two was so traumatic he can't remember it, but he is aware that his other half is out there somewhere. He has been involved in organized crime, founding a mercenary crew, and hunting artifacts for his antique business. Recently rumors came to him that someone looking like him has been working miracles in the borderlands, before disappearing into the Kl'au.

After doing some show-and-tell with the diagrams, we went around to resolve how each player bound their demon, so that we could make their Binding rolls and Humanity checks.

I wanted to make all sorcery in this setting Humanity-relevant, and I told them to bind a demon, the ritual must involve renouncing and destroying (at least symbolically) some part of your identity, something unique and precious that makes you who you are. Examples include your home, your community, an honorific, a precious belonging, or even a bodily feature. This got everyone describing really vivid binding rituals that were awesome to behold—and much richer than I expected from a first session of Sorcerer with players new to the game. Some of the scene setting included what would be Contacts and Summons in actual play, but we didn't make separate rolls for those and I didn't press the distinction.

It made me wonder, though, if you typically have such vivid scene setting and action for the binding of their starting demons. Since Binding is the one ritual where the sorcerer's active score depends on the circumstances, it seems to be required.

That's all I have time to write for now, but I'd love to report what happened once we started framing scenes based on the diagrams later.

Prev Post Warhammer Fantasy RP 4th Ed – Adventure & Situations in the Old World
Next Post Back to the Temple of Necros (more Forge: Out of Chaos)

19 responses to “Sorcerer & Sword: Into the Kl’au first session”