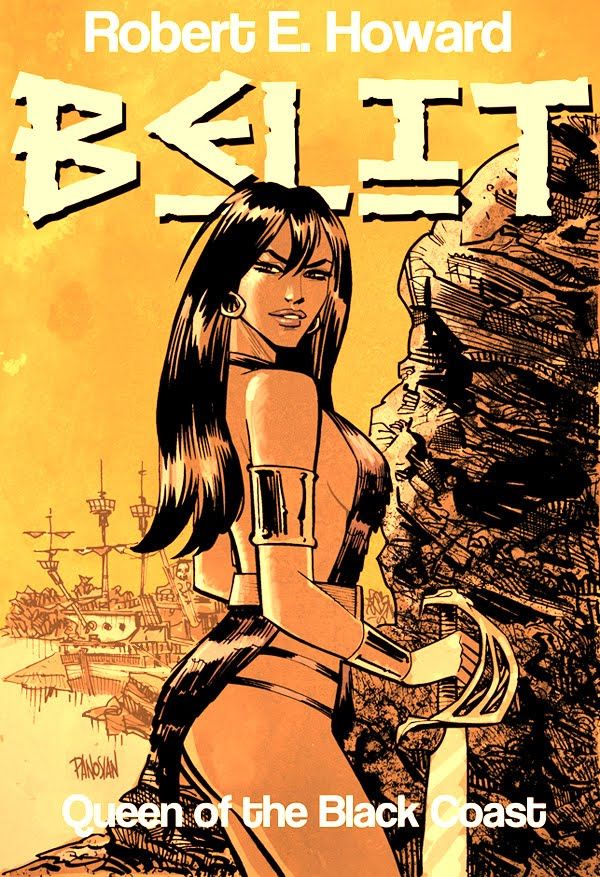 So we finalized Azur’s character and played our first session.

We finalized Laura’s character while reviewing the rules together so here is the reworked version. We used the Sorcerer & Sword rules for humanity and she traded off 2 points of humanity for 2 points in Will. Her character, Azur, is now:

We chose to start with 2 demons.  To choose the demon abilities, I asked Laura to describe what she wants for her demon. She opted for a “war” demon and a “queen-goddess-making” demon as described in Ron’s comment (we already discussed about something like it a week ago so it was a natural choice). When she described the powers, I chose some of the abilities and we read it together to see if it was fitting to Laura’s view. We were careful to not take a “pick in the power list” stance, we only checked if the power fitted with the description. Not sure about the choices but we had to go on and play so when we stopped to doubt and made some choices.

Glòir, the Demon-Ship has: Stamina 8, Will 9, Lore 3, Power 9. Need: to contemplate sexual domination; Desire : Destruction. Azur’s “inhuman civilization” had lots of these demon ship and some are used to create these barbarian communities into ship-cities.

The ship can “control the elements (sea, tempests and winds), transport Azur to a safe place when in danger, make her one of the best warriors and deviates weapon, go super-fast on the water and make Azur go super-fast like running on the water, protect her from drowning and see from the eyes of a target”. Fast, Armor and Cover (Child of war) are combined to make her one of the best warriors. Travel is used for fast movements of either Azur or Glòir, on water and to transport Azur in a safe place if needed. Protection (Asphyxia) for protection from drowning and Warp is used to “control the elements”, in the way that it can change water in to wind, accelerate winds, create a tempest. Not sure if these powers fit but couldn’t find better. I’m wondering if “travel” has to be taken two times (once for running on water and once for “teleportation to a safe place”.  I dropped Lore to 3 because Glòir is more a war machine than everything. I’m thinking about dropping its will too but I didn’t have any narrative reason to justify it other than an intuitive feeling.

Rowina is the demon-isle of Azur’s island. It is a True Demon incarnated in an idol representing a bird-phoenix-woman. Stamina 6, Will 7, Lore 6, Power 7. Need: To dominate sexually (being caressed and licked). Desire: To be worshipped. Every city has a True Demon that protects it and that needs to be bound for the city to be restored and defended.

Rowina controls the beast that approach her territory, can confuse people who attacks the city, gives queen-goddess charisma to Azur, can restore her life if needed and gives her glimpses of the future. Hint gives her the visions. Confuse, Hold and Command protects her territory, and Cover (Queen-Goddess) enacts the divine royal majesty. Now in retrospect, I think it’s lacking Big to cover the whole territory.

In Laura’s description, demon/beasts are controlled to tract the ships out of the sea and I didn’t know how to deal with this with Rowina’s power. Command only applies to animals. Maybe it should be Pacts between Azur and the beasts that need to be clarified.

We chose a “short story” approach, Howard’s conan style. The setting is an azure sea with a very hot temperature, and crafting made from sea shells. Azur’s destiny is “being queen by all means necessary” and we start with her as a queen. Laura explicitly stated that she wants to play as a queen more than “becoming” queen. We played a session of 1 hour because we started late after finilazing the character during the day, and we did some back and forth together between the game and the rules during the session. Laura and me have a 2 years long experience of playing a neonoir solo with a tweaked chronicle of darkness system, a few game of S/Lay W/me and a one-year weekly game (with a total group of 4 players including the GM) of Masks of Nyarlathotep game using various system, mostly Cthulhu Dark combined with a simplified Hillfolk’s DramaSystem variation and apocalypse world’s principles (sometimes). So, we are used to some experiments in rules, with try-out/rejection/adaptations of mechanics adapted to our needs and use the campaign as an experiment laboratory for play more than a written story to follow. These experiences made us deviate from the famous written Cthulhu campaign, with dozens of sessions which are totally emerging individual stories and sometimes input of in media res pre-written scenes as starting situations.

The game starts with Azur on the top of her Tower (which looks like a Chess tower). Her five lieutenants are in the room. I asked Laura how may ships she has and she states that she leads a flotilla of 6 ships (her own and one by lieutenant), and that all of her officers are women.  She observes the sea from her balcony and sees two things: an armada of a dozen naval ships blockading her city and, farer on the horizon, a sunken city being raised from the sea, with a dragon-like beast flying ahead. A captured messenger is chained on the ground explaining to Azur that the Lords has allied and put a bounty on her head, that they want the freedom of the enslaved kings in her harem and that she will keep her life if she surrenders. A few back and forth helped to set the settings in play: the city is built on the top of high cliffs; the ships are pulled with a complex system of pulleys activated by slaves and beasts; the ships are brought into a sea pool on the top of these cliffs. The city is an almost invincible fortress with this system.

We post it to have some feedback, both on how we played and how the game should be played. We are totally ok to know how the system has been built and why, more for comparison with how we play it, to try it in new ways, even if we have to fall back on stuffs (we do this for 2 years now!), so every type of feedback is welcome!

We didn’t record this tabletop session but some of them will be played online. Should we integrate the records even if it’s in French? 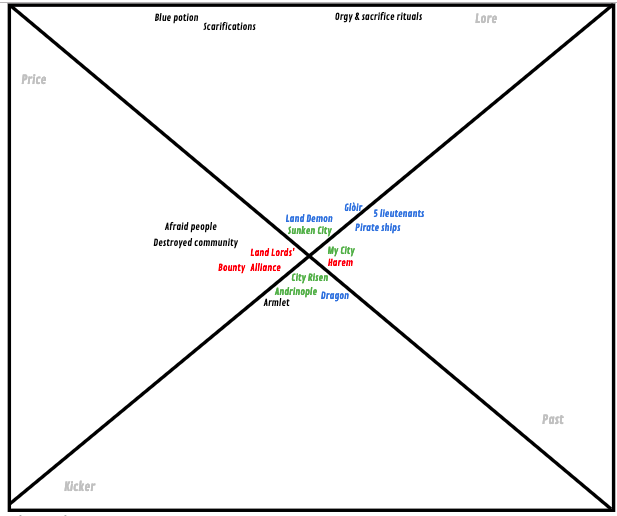