Death at the Dragonrise: RQG Session 12

After a long-ish hiatus from the Runequest: Roleplaying in Glorantha duet, we jumped right to it when we started session 12 last weekend. And goddamn did we jump into the deep end. I’m going to relate the fictional events of play, then reflect on some questions of prep that the session raised.

I’m planning on laying off writing these in-depth reports for a month or two. I’ve found this practice incredibly valuable in developing my understanding of the game, and it’s been a pleasure participating in conversation with everyone in the comments. I like the idea of adding to the game’s presence online and—who knows—inspiring a fellow Gloranthan neophyte to give the game a shot.

However, as you’ll see below, I want to focus on sharpening my prep for the game, and I think not spending as much time looking back will assist in that process.

The crew armored up in Marlesta Broo-Splitter’s tent, hastily preparing for a raid on the Temple of the Dragonrise and a confrontation with its Wind-Lord Lismelder Trueline. Narmeed used one of the Boons he’d rolled in character creation—a pot of 6-point enchanted woad—to provide his young charge Vernharl with 6 points of armor and magical protection. Marlesta cast a Bladesharp spell on Vernharl’s blade, and one of the Storm-Bulls gave Narmeed a couple of arrows enchanted with Multimissile.

Narmeed, Darrald and Vernharl made 8 warriors when combined with Marlesta and her four Storm-Bull companions. There was no question of loyalty among the Wood-Glory contingent—last session, an Opposed Passion roll led to Vernharl making the pivotal decision that his fate lay with Narmeed. Darrald has no Loyalty to the would-be nation-state of Sartar, only Love for his parents and Loyalty to his kin, a group in which Narmeed has more than earned his place. He expressed reluctance for Narmeed’s hastily-made plan, but there was no question of who he’d die for. 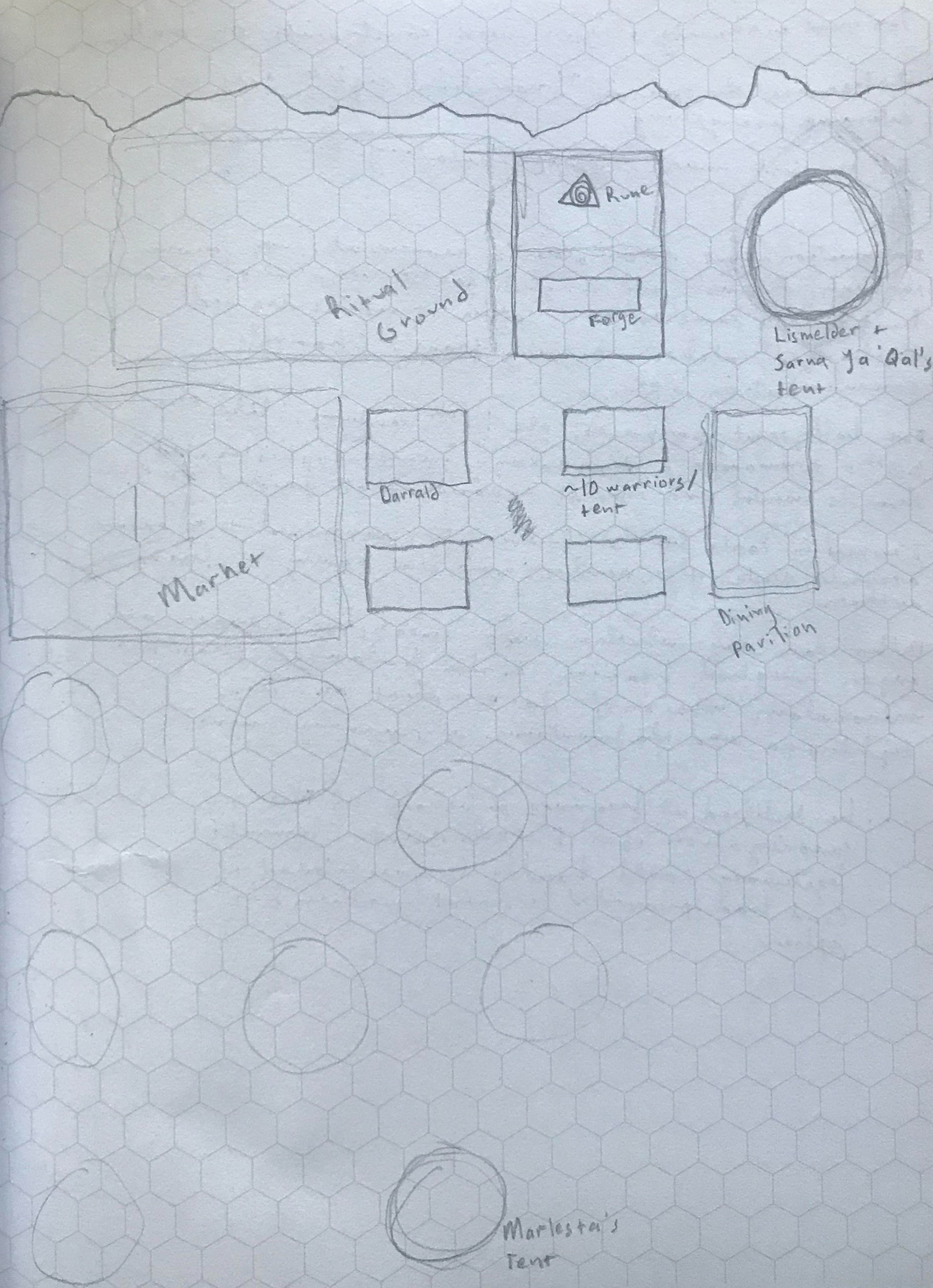 The Storm-Bulls took off on their horses shouting “Chaos!” and clanging their weapons, feinting southward toward the lowlands, then turning their steeds east and circling around through the woods to come at the Temple by stealth. Darrald was sent to the Hammer-and-Bellows Men to tell them Chaos monsters had been spotted to the south and try to draw them away from the Temple.

Darrald’s attempted deception wasn’t entirely successful, resulting in only half of the Hammer-and-Bellows Men leaving camp, and Lismelder remaining behind (though of course Narmeed and his band were unaware of this).

At the edge of the woods west of the market and ceremonial ground, the Storm-Bulls sent Parzel, a wiry old man known for his stealth, to scout out the enemy warriors. He returned with news of Orlanthi warriors still stationed near their tents. Not wanting to risk the misled Hammer-and-Bellows Men returning, the Storm-Bulls decided to act quickly and cross the open ground on their horses, giving them a lead against the on-foot Orlanthi. Narmeed instructed Parzel and another Storm-Bull to delay in hopes that they could catch the enemy from behind with arrows from the shadows and take some pressure off the main body of warriors.

Narmeed cast Fanaticism on Vernharl who raised a tapering, inhuman howl and rode like a blue demon down on the temple, his barbaric companions on his heels.

At the foundation of the Temple, Narmeed peeled the tarp back by firing an arrow through it and pinning it to the side of the pit (on reflection, rather unlikely from a physics standpoint but a memorable image nonetheless). The floor and walls of the temple were lined with massive, roughly carved chunks of stone thrown up during the Dragonrise, some decorated with images of Orlanth entwined with a dragon.

In the center was the altar and the Dragonbreath Rune, an iron mass vibrating with the ontological stress of two Runes smashed together, casting off small frissons of Chaos energy.

Vernharl leapt from his horse into the pit and struck wildly at the Rune, his blade biting into the metal and damaging it, but unleashing a wave of Chaos energy that blasted him back (thanks to Champions Now for the idea of rolling 1d6 Crushing damage twice—once for the initial blast wave, again for when he ker-thunked into the temple wall). Because of his magical armor, he was able to pick himself up and scream-charge the Rune again.

However, at this point Marlesta Trueline emerged from her tent and faced the blasphemers from across the pit. She’d donned her bronze armor and slung on her shield with her bound spirit Deathstop, but hadn’t cast Spirit Magics yet.

At this point, I decided to move into Strike Ranks and called for my buddy to start plotting out his moves. I told him he could hear the shouting of the Orlanthi warriors behind them. They had two Rounds, tops, before the enemy closed.

At SR 1, Lismelder breathed in air and let loose a blast of Dragonfire on Narmeed. With a mere 1 Rune Point dedicated to the dragon M-Gurud remaining, she could only muster 1d10 of damage (ignores armor) and rolled a 2, scorching Narmeed and his beloved mount Hearse but not roasting them as I’d hoped.

As Narmeed shouted for Marlesta to cast Berserk upon him, Lismelder leapt into the foundation and sprinted for Vernharl, with Marlesta’s two Storm-Bulls leaping in and engaging her a moment later.

Narmeed loosed a Multimissile volley that rang off Lismelder’s armor. Improbably, Marlesta twice failed her roll against her Death Rune to make Narmeed go Berserk. Failed Rune Magic rolls are some of my favorite in the game. We described her coughing among the cloud of dragonsmoke, unable to call Storm-Bull’s attention in the miasma of magical energies.

In the foundation-pit, we were getting to see a Rune-Lord in action, and things were not looking good. Lismelder’s bound spirit Deathstop had sharpened her blade (Bladesharp 5), and made the Storm-Bulls’ weapons heavy in their hands (Dullblade 4). I described her shield and the affected weapons glowing with a neon lavender light. Combined with her 120% Mastery in her sword skill, she easily parried her three foes’ attacks, rendering Vernharl’s left arm useless with her counterstroke and damaging all their weapons with her blocks.

At this point, I was feeling good. Lismelder had the melee well in hand and plenty of Rune Points dedicated to Orlanth Adventurous. I figured if things turned against her she could roast an enemy or two with Lightning, then call upon Leap or Flight to get some distance, rejoin her warriors, and renew the assault with her allies behind her.

Alas, Narmeed’s next Multimissile volley brought my plans to naught. Two were turned by Lismelder’s armor, but the third scored a Special Success (double Piercing damage) and (if I recall correctly) rolled up 9 damage on 1d8+1d4+1 for a whopping 18 damage to Lismelder’s abdomen.

After shouting some (I hope!) good-natured expletives and threats, I looked down at my sheet and realized Deathstop didn’t have access to healing magic.

When the Hammer-and-Bellows Men pelted up a few moments later, they found their paragon  hacked to pieces by the Storm-Bulls, the energies of her bound spirit leaching away into blood-soaked earth.

A successful Intimidate check from Narmeed turned them in terror.

The earth shook and the Dragonrise flared as M-Gurud thrashed in pain as its link with the physical plane was snapped. Inspired by Circle of Hands, I had prepped a Tripwire for the unlikely event of Lismelder’s death, and now I found myself using it. The mountain rocked. Visitors and worshippers fled south in confusion and terror. The Storm-Bulls hastily looted the Wind-Lord’s tent, and Narmeed hitched the Dragonbreath Rune to Hearse and cast it into the Dragonrise to ensure its destruction.

We handled the rest of the night with zoomed-out Skill and Resistance Rolls.

The Dragonrise erupted again, destroying the Temple and raising alarums across Sartar. Those who didn’t escape fast enough were killed in the conflagration or trampled while trying to escape.

In the uproar, Narmeed was separated from his companions, costing him half a day finding them again in the lowlands. Vernharl’s lover Soran was killed in the tumult, while Willandring (improbably) survived and found her way back to the Storm-Bulls, still wearing that giant wasp carapace on her arm.

Rejoining his exhausted companions the next day, Narmeed realized that Darrald is missing. His fate is unknown to Narmeed but (after a couple of Skill checks) not to me.

What I Knew Before and Thoughts on Prep

I’ve been thinking about Love D’s comment over at “Conversation: Where little situations come from.” They divide prep into the following categories:

This accurately describes one axis I’ve observed in my prep. Another axis is which elements get to ‘come alive’ in actual play. For instance, I’ve got lots of cult information nailed down for the Hammer-and-Bellows Men and the Wasp-Rider bandits that my buddy and I may never see in play. And this is OK, I don’t regret the hours of lonely fun spent imagining these off-screen aspects of the setting.

However, I do think this session is making me reconsider how I do my prep. Here’s how I’d classify my prep for this session:

The thing is that, in RQG, nailed down components behave significantly differently than labile components.

Because of her level of detail, Lismelder had access to a bound Spirit, Rune and Spirit magic, Passions and Skills for augments. Actions against her were Opposed Skill rolls, at minimum, and often made within the rigorous context of Strike Ranks. (As context, attaching Lismelder’s character sheet below)

Because I didn’t have the Hammer-and-Bellows Men as sharply defined in my mind, I tended to default to unopposed Skill rolls to handle them (Parzel’s Stealth check to scout out their position, Narmeed’s Intimidate check after Lismdelder’s death).

This isn’t necessarily a bad thing. In conversation with Sean over at Characteristics vs Skills in RQG, I’m realizing that these more abstracted mechanics are useful methods for handling off-screen NPC actions without compromising the mechanical integrity of the system.

However! The Wasp-Rider combat in session 8 was more fun, dynamic and bouncy on my side of the conflict because my characters were fully fleshed out. In this session, the Hammer-and-Bellows Men ended up feeling more like furniture. Going forward, I want to be more diligent about determining my NPC’s primary skills and, most importantly, their driving Passions, before play.

(Frankly, I think I fucked up with Marlesta’s Storm-Bulls. I rather arbitrarily assigned them Ability scores as we went. With Parzel, my thought process was “Of course this squad would have a sniper/stealth guy in a tactical role.” Quite disappointingly generic compared to my weird and specific Wasp-Riders!)

Finally, I think I’ve learned some valuable lessons from playing Champions Now and Trollbabe.
My first instinct as I reflected on this session was to leap to the cosmological and cultural implications of these events—What does Lismelder’s death mean for the stirring draconic powers that are such an important element of RQG’s backdrop? Is Narmeed fighting for an ancient, stifling order that doesn’t have room for Chaos—and therefore the New? Will his killing of Lismelder be handled by the tribal codes of weregild, or viewed as an attack on the person of the sovereign in Starbrow’s inchoate state?

However, when I look at our Glorantha Now, I see that Narmeed has no time to ponder these vast questions: He has 20 murderous Hammer-and-Bellows Men out for his blood somewhere nearby! He’s lost his cousin Darrald. He’s facing the consequences of murdering a Sartarite folk-hero. The materials for making the next Now, for framing subsequent scenes are right there in front of us.

Moving forward, I have no doubt we will explore those vast political and cosmological questions, but when we do, it will be in scene, in the grit and muscle of our characters’ immediate concerns.

9 responses to “Death at the Dragonrise: RQG Session 12”