Another two sessions of Runequest: Roleplaying in Glorantha, and things are getting bloody and wild.

We spent a good amount of time going through the game’s seasonal experience system. I appreciate how the “Between Adventures” procedures require zooming out, letting the wheel of the seasons turn forward, and watching the characters in lower-stakes situations like work, meals and worship. It also gave my duet partner an opportunity to develop Narmeed in a more measured way.

We zoomed back in on Sora, a worried young initiate of the Herd-Mother, who asked Darrald Wood-Glory, in strict confidence, to go and check on her grandmothers, Petrada and Willandring Crag-Stamp. The Crag-Stamps are members of a client family of the Wood-Glories who tend a small herd of sheep in the mountains to the north. Olav, an aspiring initiate to Eiritha who Narmeed adopted in an earlier session, brought this news to his mentor, who insisted on accompanying Darrald north. 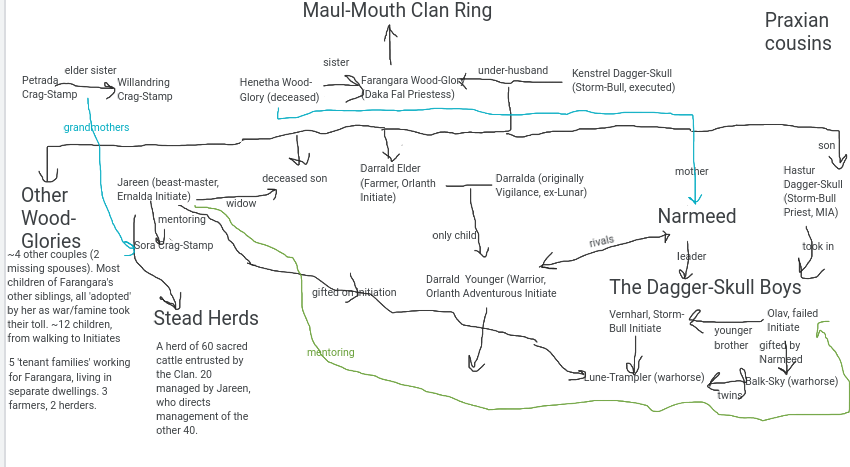 The latter half of the first session and a good chunk of the second were spent with Narmeed and Darrald interacting with Petrada and Willandring. The situation I cooked up was fairly straightforward. The Crag-Stamps are two wiry, rather eccentric old women determined to maintain their independence. In solitude, they’ve become initiates of Waha. Though this crosses gender boundaries, Petrada likes to say, “If the god of knowledge can be fooled by a woman in a beard, we figure the Butcher wouldn’t mind a few crazy old women using his magic to watch over a herd.”

They’ve had a run of hard luck, and the Olontongi clan ring has given them fewer and fewer sheep to herd each year. Unless things turn around, this will be their last year living on their own in the mountains.

This season, however, a solitary broo, Chancre, driven from his clan, has taken up residence nearby. In addition to eviscerating the local deer, he’s impregnated the herd’s ewes. Desperate for good news, Petrada and Willandring have ignored the warning signs and taken their swelling herd-beasts as a sign that their luck is about to change.

There were moments when I felt that the social interactions between Narmeed, Darrald and the Crag-Stamps felt aimless. However, looking back, I’m pleasantly surprised by how honoring Passions, communications Ability rolls and cult identities created a shifting landscape of trust, mistrust and power. The Crag-Stamps, with their Praxian background, had an inherent respect for Narmeed. However, this trust faded over the course of the day as Narmeed and Darrald tried to convince Petrada and Willandring to return to the stead for a visit and Narmeed’s suspicions increased.

The events drove toward two climactic events. In the first, Willandring caved to Narmeed and using her single Rune spell, Speak Beast, to speak to one of the ewes and ask her to give birth early. The results of giving birth to an infant broo were horrific, to say the least.

Narmeed sent his shaken kin to the Crag-Stamp’s hut and attempted (in three out of four cases, unsuccessfully) to send the animals’ souls into the afterlife properly with the Peaceful Cut. We lifted a page from Imp of the Perverse and ‘filmed’ this stomach-turning scene from inside the Crag-Stamps’ hut, where Darrald and the Crag-Stamp listened in shock to Narmeed’s gruesome work outside.

The second was Narmeed and Darrald’s hunt for Chancre the broo. The set-up to the battle was an INT v INT roll between Narmeed and the very wily Chancre. Narmeed used the carnage in the meadow as bait, trusting the broo couldn’t resist such a grisly buffet. This was a moment where the Augmentation rules really clicked for us. Narmeed attempted to buff his INT vs INT roll with Battle, failed the augment, but succeeded on his INT. It was entirely natural, upon asking my buddy for details, to say that Narmeed’s strategem succeeded, but his tactical decision to seek higher ground put the wind against him, imposing a -10% on bow attacks.

The ensuing battle was intense, with all three combatants summoning spirits and Chancre almost slipping away from Narmeed’s trap. It required engaging ranged combat, summoning, Spirit Combat, and almost the Chase rules.

A pivotal moment occurred when Chancre sent his formidable Disease Spirit rushing toward Darrald to cover his retreat. Only Narmeed had a spirit—a small air elemental—in play, and my buddy and I both expected him to be tossed aside like a rag doll. Instead, my buddy rolled the first crit of the game and his air elemental tore out half of the spirit’s Magic Points, giving Darrald time to summon his own elemental and Narmeed time to fire a fatal bowshot.

We ended with the burning of the Chaos corpses and Willandring and Petrada driving the remainder of their herd down the mountain to face accusations of harboring Chaos. I described the camera zooming in on Willandring’s pack, where a shearing-knife was stained with infected blood. They’re carrying a virulent form of Thunder Lung back to the stead with them.

My buddy and I both ended the session expressing our excitement at how beautifully the systems and color of RQG produced forward momentum, and our surprise at how thematically cohesive the plot felt, in spite of the fact that we were both just ‘playing our characters’ as truly as we could. I am beginning to feel that ‘cycle of inspiration and re-inspiration’ that Ron references in the “Curriculum” series. I don’t feel any need to ‘prep’ for the next session—just discover in the moment how the events in the mountains will affect the Wood-Glories in the lowlands.