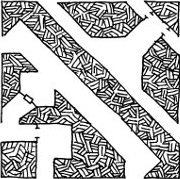 Into much kooky mayhem! This is where my ongoing skill challenges and prepped situation and announced character quests all collided, producing plenty of “this is how our story goes” with not a single intended or planned effect to be found in in my preparation.

It’s also a good opportunity to discuss that preparation in more detail. Those following along know that the cute little floaty-land I described in the previous post about this game, called Our Land by the two primary inhabitants, has some back-story. A crystal meteor hit it, hard enough to shatter off a piece, and Irru has had a hell of a time steering it back to rejoin the main part. Meanwhile his sister Urri has had an equally difficult time trying to manage the consequences of the impact, including an incubating mega-crystal and increasing wildness among the inhabitants.

To make matters worse, each has a fragment of crystal from the growth and is convinced the other has the “right” one, as using the respective piece results in a disturbing, dangerous impasse, perceived as a mystic Door.

There are several things I’m not telling you: what are Urri and Irru, anyway? (hint: the latter’s behavior when one of the player-characters successfully struck the former) What is this “Land” relative to the crystal which struck it, and can they be reconciled? Why is the former monastery at the corner of Our Land closed and silent?

Leaving those currently-forbidden secrets alone for now, here’s what I prepped:

Now, all that is just fun and for play-purposes, mighty functional. How on earth did I come up with it?

The answer is … a bit of synergy, a little bit of unexplainable pattern-making when there isn’t one … but also, looking at the right things to kick those intangibles into tangible notes. In this case, the “right things” were …

1. Dyson’s big map of the sky-island which struck me as pretty much perfect for a bit of unhinged reality in the shattered-cosmos setting we’re working with, especially of the less-crazy, more-earthy, actual farm-and-castle variety. Not too far from the concepts in Michael Reaves’ The Shattered World, although that novel’s setting is a little meat-and-potatoes compared to the whacknut stuff I’m aiming at. This map provided me with great cues for back-story, including the tethered/shattered-off piece and what appears to be an impact site, plus some kind of crystal growth.

2. My desire for multiple agents with very different desires, in a small-scale location; the map permitted me to isolate spheres of control (e.g. the tower, the farm), and to consider the role of the forest.

3. A flip through the Monster Manuals for fun builds to use; this is not only ongoing, but I’m working with choices I’d specified quite a while ago – one cannot read the Goblin of Maglubiyet’s mechanical build without wanting to make a badass psychedelic-fantasy woman out of it.

4. Dyson’s geomorph, one of dozens. I chose this one because of its philosophical implications … well here, let me explain.

You see, the intention with all those geomorphs is to hook them together side by side, to create an ongoing sprawling space. But I’m doing something weird with them: connect up opposite openings as indicated here by color: 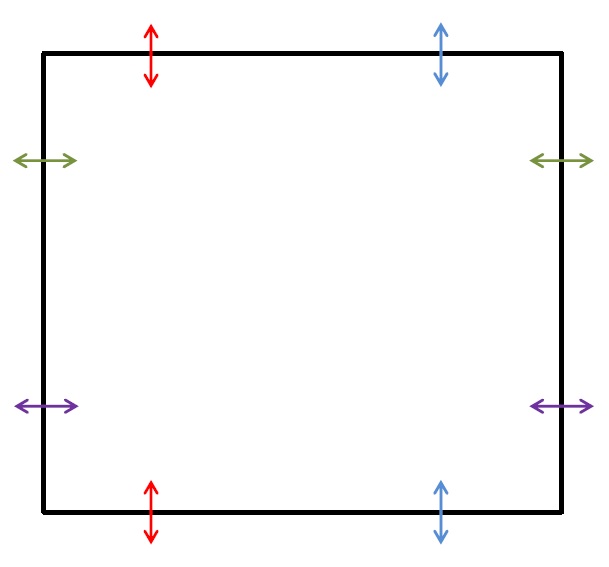 I developed this for my first Barbaric Psychedelic game, in which I made a 3×3 square with nine geomorphs and hooked’em up like this at the far edges. It worked pretty well. It was also too big for what I had in mind here, where I wanted the action to be more about the whole landscape and less about doping out the dungeon in and of itself. Sooner or later I found myself thinking about doing it with one geomorph, for a kind of bite-sized infinite space that would be extremely weird to experience but not crazy-impossible to figure out pretty quickly.

Furthermore, I like Dyson’s work on these because they’re often not … well, to put it bluntly, not stupid. There are lots of levels (i.e. elevations), there are interesting details and room constructions, there are what seem to be little half-heard back-stories one suggests to oneself upon scrutiny. And when you do this fucked-up tesseract trick with one of them, you often get quite an interesting little biscuit. To the point where I’m looking at them now like this by default, forgetting their intended purpose, and I have to squint and shake my head to stop doing it.

Anyway, try it out: start with the blue and green arrows at the top right corner and apply them to the illustrated geomorph. See how each one takes you to one end of the big, long diagonal corridor with the door in the alcove? Using those two starting arrows, you’re on “this side” of the door.

Now, start with the other side of the door. From there you go either through the purple arrow or the red arrow at the bottom left, and you end up at another diagonal corridor which ultimately joins up at that point we began with in the above paragraph. Interesting! Two sides of the door with very distinct zones of the rest of the passages … and if one posits a kind of blindness or confusion at that non-door point of overlap – where there just happens to be an interesting little squeezed corridor for no reason … then you get a door which will obsess two opponents from either side, neither one realizing that all they have to do at that other point is to … turn around, and see one another.

Ice Cream Koan unlocked! You can see from there why I needed two primary NPCs engaged in this problem, no more and no less, and how easy it was to make them twins/siblings. Taking that back to the monster/build picks was easy, including sidekicks for each (I knew how nasty the bloodhawks could be from an earlier game, and I wanted to see what 4E orcs were like), setting up features for the forest and crystal beings in tame/wild states, and choosing an approprite guardian for the now capital-D Door.

Now, I can’t tell you which piece clicked with which other one first. #1-4 were all occurring simultaneously, and crucially, over a long period of time through a couple notebooks, rather than a single dedicated “I must prep this!” push. That’s also in tandem with other preps I’m doing of similar kind, so for example, that’s not my only creatures-list I’m thinking of. I know that the twins-concept and certainly their characterizations were a late step, as well as the rather nice notion that the meteor impact had splintered off that piece which was tethered (i.e., it’s not a foreign arrival). I also know that I have no planned or hoped-for solution to the whole situation, so that’s not part of prep at all.

Thoughts and points and questions: all welcome.

Prev Post A bit of a mind flip, into a time-slip
Next Post Monday Lab 1: Engine Rev