When the going gets weird 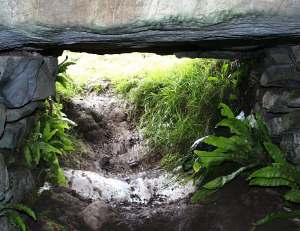 Jerry’s moved into a new design phase for Godsend Agenda, and it’s time to play some more. This time, Kieran is GMing for Renee, Jerry, and me, and he provided our group concept as well: a weird old society in a broken-down town in coastal New England, which has recently recruited the three of us, who have a shared history battling some of the nefarious bastards who litter the lifelines of character creation in the game. There’s a strong influence from Hellboy, or rather BPRD, with whiff of the Doom Patrol – for example, the leader of the society is almost certainly an undead H. P. Lovecraft, or at least August Derleth. We knew, too, going in that play would take place partly in Europe, and I think even that it would be Ireland.

Our characters were made in knowledge of these things (not the Lovecraft part; that’s my and my character’s surmise given the events of the session) so they’re a little spooky in the horror and spy senses of the word:

You’ll see in the session that I’m doing my usual political-historical thing with super-type characters; Thin Mind is from the Northern Republic, but Catholic, from the the border region, and her espionage background seems rather conflicted regarding “sides.” USER is American-centric but has lots of international branches or subsidiaries, so I figure there’s some very shadowy two-Irelands nonsense she has partly emerged from. Kieran’s helping me out with some of the necessary details and cultural perspectives as we play.

Speaking of locations and culture, our situation is centered on the real-world Oweynagat Cave, which seems to be a sure-enough hellmouth.

My experience of play right now is quite a shift. In two different games, with completely different sets of people, I’m playing characters in straightforwardly GM-controlled, GM-delivered investigative mysteries, the kind that are likely to end with some kind of violent showdown. Each also relies on real-world history, locations, and legendry tied into a mythic and symbolic past, with the characters as weirdness-touched, half-in and half-out sleuths or arrivals into a fraught situation. This opening session and the Väsen session were structurally and informationally identical, to the point of being a little eerie for me during the same week. It is, for a specific culture of role-playing, exactly how one does it.

With only one session in for each, there remains a great deal of room for “how we play” to develop, so I’m not claiming what each game will become. At present they represent slightly different relations to the respective texts.

I mentioned in the Väsen post that we will eventually learn or even collectively decide whether our respective characterizations and issues are colorful but not especially relevant, but if they do “jump up” into a priority of play, then it will be very much our stamp on the game design. The textual design itself does not require or even, it seems, conceive of such a thing.

Whereas in Godsend Agenda, there’s more potential tension between the design and the mode of play: procedurally, the group’s pantheon is created by the players to be self-driven (the titular agenda), whereas here our pantheon isn’t really ours, but instead it’s our employers, who send us on missions. Therefore our character-driven agenda (“stop Sovereign’s Manifest Destiny”) is potentially orphaned. I don’t think this is a problem, it’s merely just how we’re doing it this time and it may well be a productive tension, but eventually we’re going to have to land on a conceptual spot so I know how or even whether our stated agenda is part of play.

Lest any of that sound negative or critical, I hope you can see in the session how much fun our three characters turn out to be to play, as well as the attention to location and legend. I rather do expect us to cleave together rather than apart, and I’m looking forward to some mayhem – goofy or quirky as we may appear at first sight, there’s some formidable power and a lot of personality to back it up.

Prev Post Bringing It Home: RQG Sessions 12 – 13
Next Post Fun and games in the Book of Job

One response to “When the going gets weird”