A Circle of Hands Session–Just Playing! 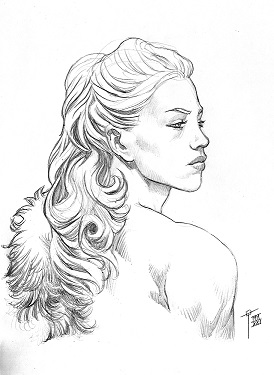 This is an image of Gertraud Long, one of the Circle Knights, by Tazio Bettin! @taziobettin on instagram check his art out!

I recently played the third session in an ongoing game of Circle of Hands with Rasheed, Tazio and Aybars (for which I am the GM). This third session is where the game finally worked. It felt like we all had a good grasp of the system and I felt like I was able to do the duties I am responsible for much more effectively without worrying about making sure the game was fun for anyone else but myself. I know this might sound a little selfish but…maybe the rest of my post will explain my mindset.

Here I am going to talk about one specific scene in the game that really stuck out as a learning moment for me (and maybe the players too?). Tazio's Circle Knight, Gertraud Long (a wizard), had just left the village of Veitbruck's big end of harvest celebration (complete with dancing and loud music etc.) with Roland, the town's fiercest warrior and the owner of a necklace enchanted with Rage. Roland also had a bit of a sex addiction. Gertraud began to ask Roland about the necklace. Here is where the charm mechanics came in to change the situation–Tazio failed Gertraud's charm roll, and while Roland was drinking in the previous scene where the two danced and flirted, he had sobered up while doing veiled activities with Gertraud, and was now suddenly aware that someone he mistrusted and hated was in his bed. Prone to acts of cruelty from his time around the enchanted item, Roland began pushing Gertraud out of his bedroom as she continued to interrogate him. Again, I didn't have to make a decision about "what would be most interesting or exciting to happen" in this moment. The charm mechanics, my knowledge of Roland, and the impact of enchanted items upon communities informed this crucial moment of play.

So, Gertraud casts palsy on Roland, who swears an Oath to torture her and uses Rage.

The explosive sounds of their magical fight draw the other knights and most of the village to either join the fight or watch. Here, the ramifications of a seemingly minor roll have major impact. Aybars, who was playing Lothar, failed a Wits roll to go check up on Gertraud (in the dark, while extremely drunk so at 1 die). He was lost somewhere in the night and was nowhere near the battle. Heike, played by Rasheed, was close by, and grabbed a spear and attacked Roland as Gertraud fled naked to find a weapon. While Heike and Roland were locked in combat, Lothar found his way back at last and attempted to stab Roland, who tore his head and one of his arms off. Gertraud charged back into the fight with a spear and killed Roland at last.

None of this was planned. I wasn't really surprised to see Roland and the Knights get in a fight, but the work on my end was none. And here I really mean work, the act of working to make your players have fun that seems to be the recommended way to GM (kill a character? fudge the roll, make sure that everything is Balanced for the Party, make sure every character has a niche etc.). I played my characters instead of planning events, and the mechanics helped immensely, especially the charm rules (which continue to make play dynamic and interesting). So when Roland was ready to tear Lothar into pieces the first time he had been played, I didn't hesitate for the sake of Aybars fun. I tore him in half just like Roland would. Make your own fun, I am going to play my characters! I think that planning events would get in the way of this type of organic drama that happened, and I am so sick of feeling or being responsible for everyone's fun. So, I think this GMing practice is a great one for games that allow it to work. I would love to hear some thoughts from the players!

I also wonder when it is good for play for the GM to do this work I was talking about above. It seems as if this is required for a large number of games, so I'm not really saying its bad play. But when the system allows for play without this kind of planning of spectacles or of "fun", I really enjoy it much more.

There was another instance nearer the ending of the venture where my attitude of "I am just another player not the fun maker" came into play, and I'll probably write about it in a reply if anyone ends up replying to this post.

11 responses to “A Circle of Hands Session–Just Playing!”