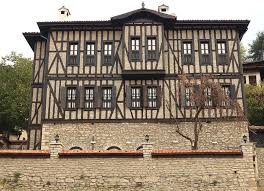 It may not appear in every Sorcerer game, but if you have to bet on what’s in one, you won’t go too far wrong with tattoos. In this case, due to the emergent Nordic Noir in our pets + ancient ruins opening statements, it’s tattooed dead people. And apparently, tattooed dead people getting up and walking out of morgues.

Spooky mansions are a good bet too, and sure enough, we have one of those, including a picture Aybars sent me for his idea of Ahmet’s and Selma’s home.

Before continuing, yes, I have not yet learned to pronounce “Çatalhöyük.” Wait ‘til next time. If I’m going to invent horrifying “truths” about ancient archeological digs, then I can at least do a little glottal/labial retraining so the native speaker doesn’t laugh at me.

As for anything substantial to say, let’s see. I submit that the best way to play this game is never actually to withhold information, but to shove its availability at the characters in every possible way, for many separate items, and see how the rolls turn out. You’ll see here two failed sorcerer-orders-demon rolls which shut down alerting them to something important, with definite consequences.

Another point is observing Pedro – perhaps thinking of his experiences with varying player-character knowledge in the Sorcerer Musik game – playing his sorcerer, Ingmar, being very open with Ahmet concerning dangerous and sensitive information. I like that, it’s creating a definite buddy vibe. Similarly, Aybars is playing Ahmet to be quite moved by his wife’s willingness to discover a route forward in their tragic marriage … and that puts me in the interesting position of playing a demon who is being told by another demon, in all innocence/malevolence (because who can tell the difference with demon pets), how great it is to have one’s sorcerous master’s significant other made conveniently and permanently absent.

What else? Only that this is fun. My real tasks concern playing NPCs as more and more understandable people and playing demons as definitely not people. Challenging in the complex and fascinating web of influences and ambitions we’ve set up for this game, but not hard at all.

2 responses to “Demons 1, significant others 0”