Ideas for an Actual Play Assignment in a Classroom 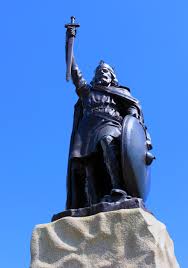 Ron’s ideas for Actual Play Reports have started me thinking about the usefulness of his approach for an upcoming experience I’m going to try in my 9th grade English classes.

Here’s the set-up: At the end of the semester, I will be teaching Beowulf to a varied group of 9th graders. I’ve been tasked this year with teaching a course that can reach students who have been challenged by English classes (some have learning disabilities, some have attention deficits, some are unmotivated, some have had bad English class experiences, and some are simply looking for a more deliberate pacing).

Beowulf is one of those texts which is challenging to ninth graders under any circumstance. It faces students with issues that they have a difficult time grasping and appreciating. Problems of scarcity, strange rituals, archaic notions of honor, mysterious monsters–these elements and more are baffling to first-time readers.

What is the teacher to do? I’ve taught Beowulf many times, but this year, I’m taking a different approach. Since June, I’ve been creating a nuanced classroom game about Beowulf that involves resource management, tribal negotiations, and role-playing. For those interested, a rough draft of the player’s guide is here.

I’m planning to use the game as a way to bring the students closer to the world of Beowulf as we read the text. The game will put them into situations based on ones encountered by characters in the old English epic.

But what do I do after we play through the game (and finish reading the poem)? I could just leave the game behind, hoping that it has done its work. But now I’m wondering about ending with a written reflection piece modeled somewhat along the lines of Ron’s “Best Practices for Actual Play Posting.” I will obviously have to do some tweaking to set up the writing assignment for students. But I would be interested in getting their thoughts.

One thing that really excites me about my Beowulf project is this: In my mind, there is a lot of literature which is valuable because it provides an experience in a way that history books or other “dry” forms of writing cannot. But the experiential dimension of Beowulf is initially unattainable for many students. If a reader cannot fathom the problems and issues faced by the characters in the text, then how can we expect the reader to feel or to inhabit the text in any powerful or meaningful way?

But what if a well-designed role-playing game can more dynamically put them into the world of an initially mystifying text? What if a student can become a character who now has to make concrete decisions and to discuss with her or his peers the crisis that is bearing down on the tribe? In what way can a gaming experience help a reader to better connect with a literary text–and, in so doing, to give them a more enriched experience of that literary text?

These are exciting questions for me, but it seems to me that I won’t be able fully to flesh out the answers to those questions unless I hear from the people who are playing the game (and who are struggling with reading the text). So I’m thinking that an Actual Play Response might be the ticket and that it will work on multiple levels: It will give the students a meaningful writing prompt, it will spark them to reflect on their reactions to two art forms (one literary, one a game), and it will give me some good evidence for how my game has worked (or faltered) for the players.