Back when Everway first came out I ran a game for about a year. What I remember was that it feel flat. I was using a mix a reading the text and assuming I knew how every RPG worked because I played D&D.
So just over three years ago I picked the game back up. We have a local group that is pretty ad-hoc. Players drop in and drop out. We even have folks that are passing through ABQ who play for a single night. Sometimes there is no character nor Realm monogamy.
The text supports roughly two modes of play. One is on the fly no-prep or rather prep as play with everyone around the table playing in. The other is more facilitator lonely fun.
One vision card from each player became a Realm in jeopardy. We had to choose one that was most important to the group. The other two were left to their Fate.
Shown is the Realm of Broken Sky. 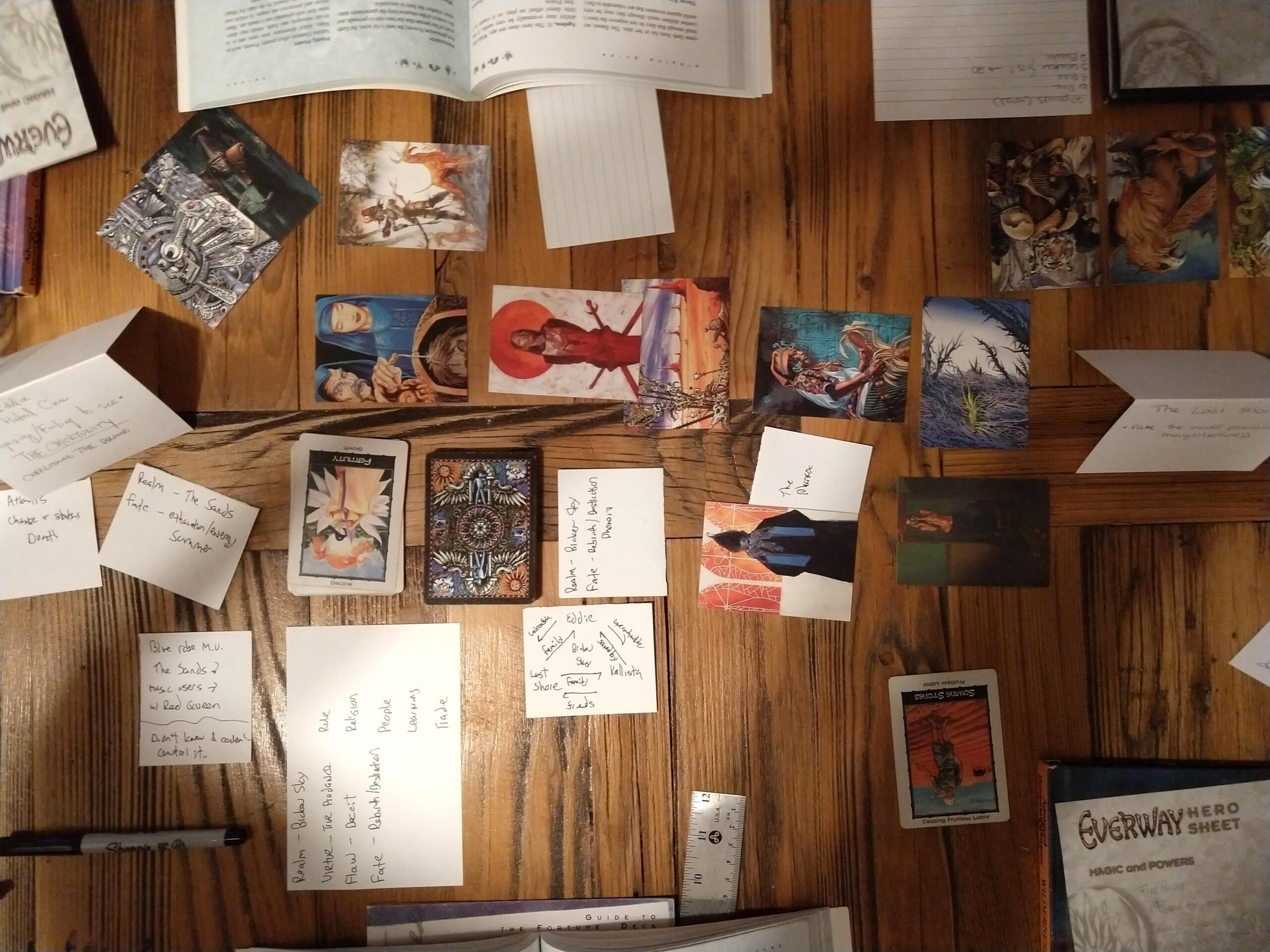 Everway – Character and Realm Creation
1. Pre-made characters.
Handout the pre-made characters from the Everway box. Flipped them over to the back and ask the players to pick one that inspires them. Ask the players to read the whole back. Here I mention these are not yours but people you might encounter or aspire to be like.
2. Vision cards.
I divide the Vision cards into piles equal to the number of players. The number of players is capped at four. Select five vision cards from the piles. Switch piles as you want to. These five cards are for the background of your character. Look at the images and questions then start to take notes on who this character is.
3. Identity stage.
Draw a card from the Fortune deck this is your character’s Virtue. It’s a special strength, gift, or random luck.  Then draw a card for your Fault – weakness, vice, or failing. Record the card names and meanings. Finally draw your Fate. It’s sideways so you will write in both sides of the card. This adds some random elements to the character.
4. Elements stage.
You have 20 points to divide among the Elements, Powers, and Magic. To start with set 5 points aside and distribute 15 among the Element score. You can always add in your 5 points later.
5. Powers and Magic.
You can buy powers and magic. Unspent points can be dumped back into the Elements.
6. Names
Pick a name. Ask for help if you need it.
7. Introduce your Character.
I ask for a few sentences about who they are. Other players can ask clarifying questions and things to expand on. Once we go through a round of this we move on to Playing In.
8. The Realms that matter.
I point to a Vision card from each player and ask “Why does this matter? And is this a Realm or part of a Realm”? Take notes on why this matters. I write down the name of the Realm on a card. Once all the players have committed a Vision card – we lean into them. Each Realm gets a Virtue, Flaw, and Fate. I give everyone a few mixtures to think about the Realms. I then ask “Of all the infinite Realms we care about these three right now matter. Why? And which one do we save? The remaining are left to their fate.”
9. Playing into the Realm
Here we start attaching Vision cards and notecards detailing people and places that matter in the Realm. We don’t always know how they matter. Gives you a hot mess of relationships and open questions.
10. Motive
Now we assign Motives to each character once the Playing In is wrapped up.
11. Resolution
I give a breakdown of how we resolve things in the game. Drama, Karma, or Fortune.
Drama – we just talk going back and forth like a conversation.
Karma – kicks in when you take a meaningful action.
Fortune – kicks in when you take a meaningful action and we don’t know what the outcome is or we want a non-binary outcome.
12. How do the characters know each other.
I set a brief stage in the Realm we care about and then ask how did the characters come together. We add to the cards in the center of the table as needed.
Actual Play
Everway