Our third proper session was yesterday, and my and my duet buddy’s Runequest: Roleplaying in Glorantha game is starting to heat up.

We settled on a backwater Orlanthi stead for setting, close to the road to Whitewall. ‘Our’ clan are the Maul-Mouths, Olontongi who stubbornly held onto their ways (and their rivalry with the Keen-Teeth clan across the road) against the Lunar invasion. They have fairly close ties to the Praxian horse-riders, so there’s a mixture of Praxian and Orlanthi customs. Farangara, the elder of ‘our’ longhouse (inhabited by the Wood-Glory family) is a Daka Fal Shaman, the last of her generation to survive the invasion.

My buddy’s PC, Narmeed, is a vet. An initiate of Storm-Bull, probably aiming for Rune-Lord status. His battle-scars scarified into cult Runes. His warrior mother left the Wood-Glories to marry a Praxian in the city of Pavis. Now her son is coming back to ancestral ground and (thanks to a successful Reputation roll) finding his place among the Wood-Glories.

A young Wood-Glory, Darrald Younger, fought with distinction in the war. He’s well on the path to Rune-Lord of Orlanth Adventurous. However, he and the Dagger-Skull Boys hate each other’s guts because Darrald’s mother is an ex-Lunar colonist. She converted to Orlanth when she married Darrald’s father, changed her name to Darralda. The Dagger-Skull Boys’ viewpoint is “Once a Lunar, always a Lunar.” In their eyes, it doesn’t matter how many imperial warriors Darrald Younger brought low: he and his still stink of Chaos. 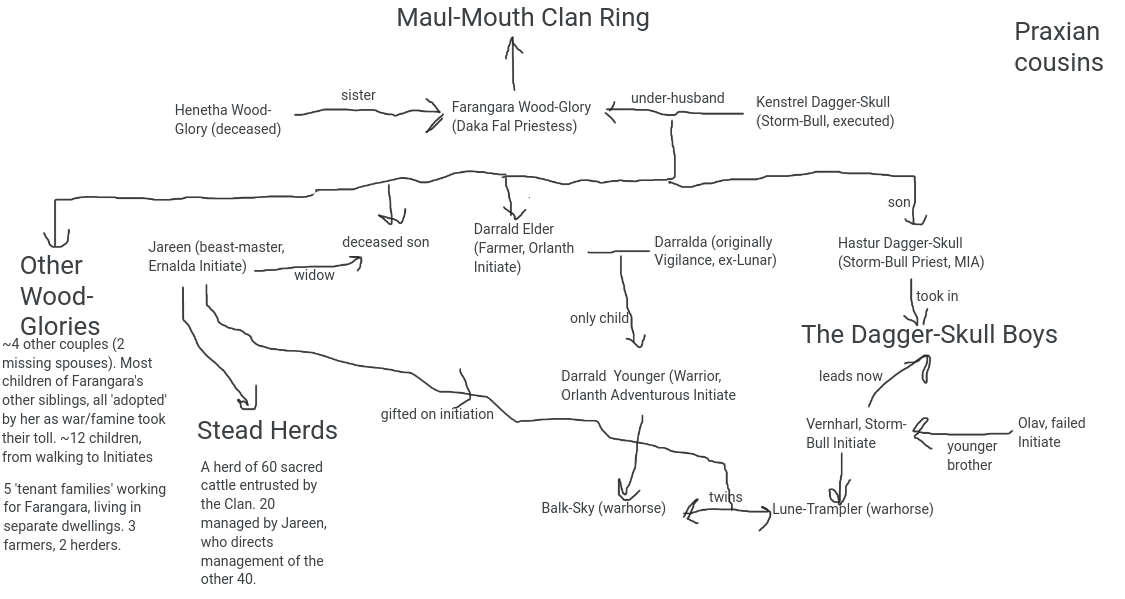 My duet buddy has entered this minefield and played Narmeed honestly, unafraid to have real consequences on the family’s social fabric. Long stretches of our first three sessions have been in conversation between characters, descriptions of living conditions, performing ceremonial acts. I think the setting demands this. We’re trying to enter a very alien, occasionally scary bronze-age headspace.

Two scenes have had serious, unpredictable impacts on the story. Neither of us have any idea where this will go.

The first (from last week) took place the morning after Narmeed’s arrival on the stead. The Dagger-Skull Boys, led by their just-barely-adult ringleader Vernharl, took Narmeed out to the pasture. Vernharl cast the only Rune spell he knows, Berserk, on his younger brother Olav, who commenced to defeat the other, stronger boys in practice combat. After this demonstration, Vernharl demanded to see Narmeed’s magic.

This was our first time engaging RQG’s combat system. It was, to put it mildly, brutal. Narmeed put down three of the Dagger-Skull boys before the rest fled. Each young warrior went down in a single round. Even wielding a wooden sword, Narmeed hurt Vernharl badly enough that it later required Rune magic to mend. When the group scattered, he managed to run down one more and lay him out from behind.

For us as players, this scene drove home how dangerous violence is in RQG. A battle cannot be controlled. The scene highlighted, too, how the crossing of various sub-systems can impose unforeseen consequences. Narmeed failed his attempt to snap out of his Berserker battle-trance, and when he had no more enemies to defeat, he still had fourteen minutes before the spell wore off. He came to himself in the mountains north of the stead, unsure of whether or not he had unintentionally murdered a kinsman.

For Narmeed, this scene was key to him taking Hastur’s place at the head of the Dagger-Skull Boys, and also to him understanding his own capacity for violence. He aspires to lead the fledgling cult with a gentler hand than Hastur did, but this runs counter to the boys’ expectations and his god’s.

This tension within Narmeed’s personality drove the second pivotal scene (from yesterday’s session).

“Did you learn something today, Vernharl?” “Yes sir. I learned never to make a bet you can’t win.”

Narmeed had invited Vernharl, Oav and Darrald Younger to ride horses together into the mountains. The simmering tension between the Storm-Bull worshippers and Darrald boiled over quickly into an argument. Darrald blames Storm-Bull impetuousness for getting friends of his killed during the war. Narmeed followed his worst instincts and kept on needling.

Narmeed challenged Darrald to a hunting competition to see who’s cult gets bragging rights. Darrald agreed and suggested a bet—if he won, he got the enchanted dinosaur skull revered by the Dagger-Skull Boys as a last gift from Hastur. If Narmeed won, he’d get Balk-Sky, Darrald’s beloved warhorse.

Deciding how to run the hunt took riffling through the book and looking at Skill descriptions. After settling on a procedure, Narmeed went for a Rune augment to supplement his hunting skill. Darrald called upon Orlanth for the Rune spell Raise Wind, hoping to decrease Narmeed’s odds with his bow.

Both rolls failed. RQG does a great job at adding texture to failure with Rune augments: The character is out of tune with their Rune and loses a % from their score. I rushed over Darrald’s failure in the moment—his casting was happening off-screen, and my buddy was eager to roll. However, in hindsight, I’m curious to explore what that failure means to the NPC: does he interpret it as a sign of Orlanth’s will or displeasure? Will it have consequences for his relationship to his cult or his god?

A couple of Ability checks covered the day-long hunt. Narmeed returned with a scrawny stag. Darrald returned late and empty-handed. He gave a tearful farewell to Balk-Sky before walking off alone, murder in his eyes.

Narmeed and Darrald are the Wood-Glories’ most capable warriors. Their rivalry has the potential to tear the frayed webs of kinship apart. Neither of us have any capability (or desire) to predict where this will go.