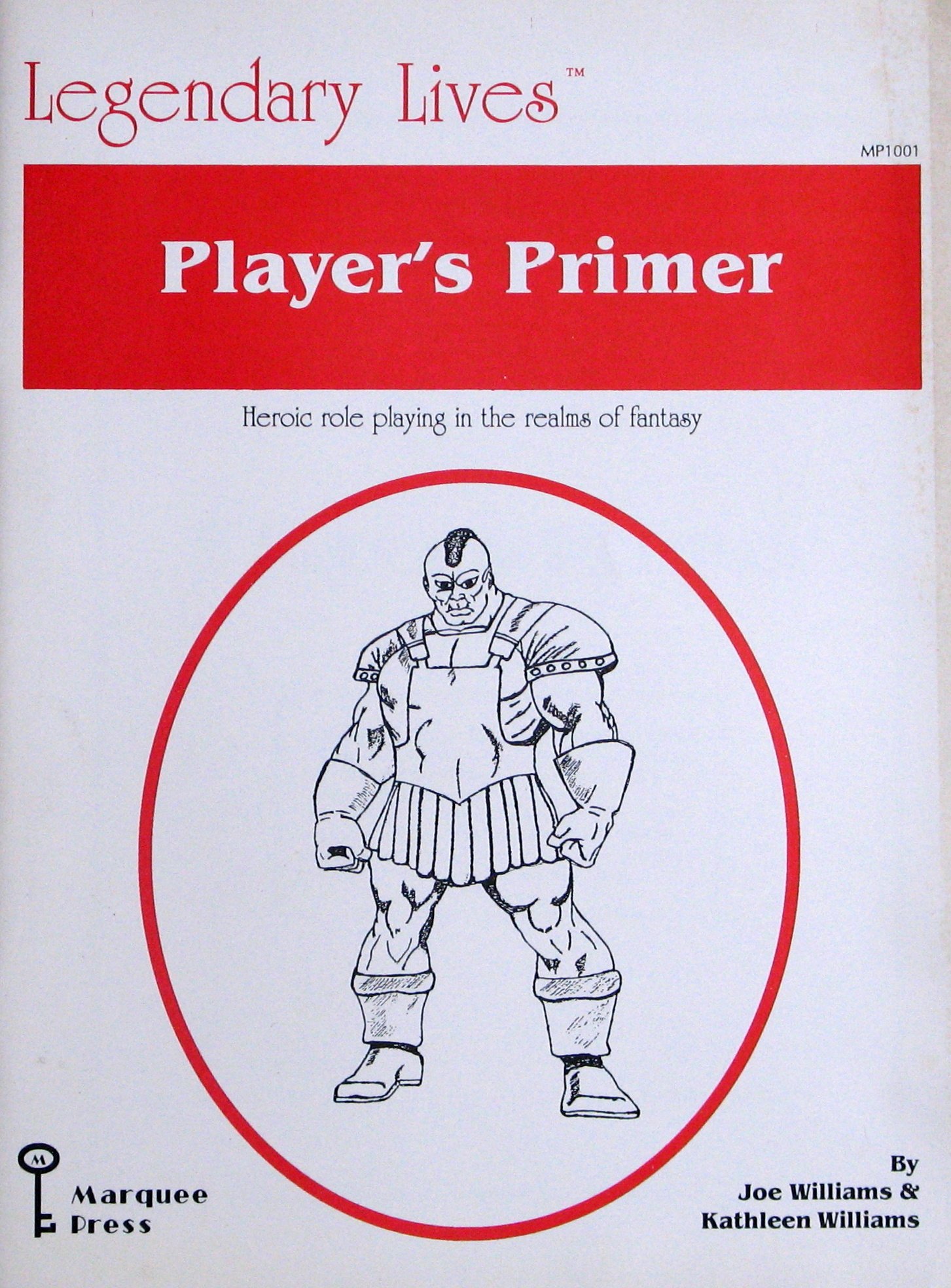 The Four R’s (Ross, Ron, Rod, and I) played through eighteen sessions of Legendary Lives, completing our run at the start of December. For background, this heroic fantasy rpg is one of the so-called Fantasy Heartbreakers that came out in the 1990s. There are still plenty corners of the game that I would love to explore, and that fact in itself is an indication of how good the game is. We could easily have played on for another eighteen sessions, but schedules and other commitments were weighing on us.  Though the game would richly reward more study, it is fair to say we put Legendary Lives through its paces and are in a good position to offer some measured judgments of its qualities. What follows are some notes I’ve put together in preparation for a debriefing session.

To begin, here are four of the game’s real strengths.

Religion and Magic
In game terms, the effects or religion and magic are quite similar. Religious miracles (guidance, fortification, wonders, etc.) and spells carry supernatural effects which are flexibly molded by the players and GM. In fact, miracles have added utility because they are so plastic and because your supply of miracles gets replenished each day (the total number of Miracles being dependent on your character’s Devotion score). Casting spells comes with a cost that gets deducted from the spell score, and this makes the spells more difficult to cast and it limits the number of times you can use them. In the case of both spells and miracles, I like the creative room left for the player. Divination, for example, (which Grrrl used on multiple occasions) can be used to detect events, qualities, or features near and far, and there’s quite a bit you can do with the spell within those types of wide parameters. The system is nicely scalable in terms of the power of the spell: The wider or more forceful the effect, the more a spell costs and the more difficult it becomes to cast.

I had my character (Grrrl) to explore both miracles and magic. I achieved some notable effects (including a wild triptych of a vision towards the end of our run), though I could have taken even more advantage of these resources. At the same time, there is a danger that the game could take on a zaniness if characters were fully exploiting their miracles to the extent allowed by the rules. Our trio of adventurers kept the miracles in check, and this was in part because our characters took religion with a certain level of gravitas. Had we used our full allotment of miracles, the game could have swerved into a direction which would have made religious powers more mundane and flat.

Epic Play
So much of Legendary Lives is set up to reward the long arch. Consider the following:

Curiously, Legendary Lives received much of its playtesting and popularity by being run in convention settings, which has left parts of the game underdeveloped. In other words, you have a game amply loaded with elements that say “long-term play,” but the rules don’t provide much in the way of advice or aid for campaigns moving into their second wind. My sense is that Ross (our GM) had some good techniques operating behind the curtain to make up for this gap, and I’m looking forward to hearing more from him about how he handled preparation.

One idea that might be worth exploring: Have the players periodically revise the character stories to provide new goals and drives (along with introducing new NPCs and factions to deal with). The GM might even flashforward the game, taking the company to a different region and/or time period.

I sensed that Ross had a load of ideas sizzling on the backburner, and we sometimes fumbled in the triggering of those elements. Part of my problem was the time between sessions (usually one week, but sometimes more): I’m an avid notetaker, but even with those notes, it was challenging to keep the various story strands in mind to spark actions in play. One of my notes to self: I’m going to be more active in the future and will put together postgame reports which will help to keep NPCs, events, and developments in better order (and to keep my memory banks firing more effectively). Ross was superb in keeping things open for the players, allowing them to determine what they wanted to do. I did wonder, however, if we could have telegraphed for him what we were wanting to do to help him with prep between sessions. For example, we let him know that we were inclined to attend the masquerade ball prior to that session, and I imagine that was useful for him in getting notes together. But on some weeks, we could have offered him more in the way of forecasting our upcoming moves–at least providing a sense of what our characters were mulling over in terms of the immediate future.

Combat and Skills
The combat system uses the same core mechanic as everything else in the game. There is a hit location aspect at play, and the head is the most vulnerable spot, which made us worried that fighting would be unforgiving. After the initial combat encounters, it because apparent that Legendary Lives is far more wicked on the Foes than it is the player character heroes. I enjoyed the fights in the game, and Grrrl was quite fun to play both in Wolf and in human forms. I also appreciated, however, that the game encouraged a mix of activities. We had some sessions that were combat oriented, others that were more explorative, and others focused on interpersonal negotiations and relationship building. Legendary Lives supports all those types of play, and its array of skills and abilities supports them all. To illustrate, skills are divided up into 12 ability categories. Four of those–Strength, Stamina, Dexterity, and Agility–involve skills that come in handy during combat. That leaves a robust 8 ability categories which involve skills involving a wide array of pursuits–Business, Repair, Caves, Preach, etc..

Some “skills” are odd (partly because some really aren’t skills at all), though in play we found them to be useful and intriguing. Some examples:

In Conclusion
When you say that something “holds up well,” there’s a backhanded insult implied. The unstated idea is that the something–whatever it is–shows the marks of age and defunctitude. The something is o.k. if you want a retro experience, but that there’s much better stuff out there.

So I won’t say Legendary Lives “holds up well”: The game is so much better than that. It has always been a rock solid fantasy rpg, and it remains so. The game has much to teach current designers, and my sense is that new games would be better if they took some inspiration from what Legendary Lives does. LL would certainly elevate the writing craft of rpgs. We can debate some of the odd descriptions of races or point out the gaps the game leaves in terms of the long arch. But these small blemishes pale in comparison to all the game has to offer. If I had a chance to play Legendary Lives again, I’d jump at the opportunity. It is a uniquely satisfying and continually rewarding experience.