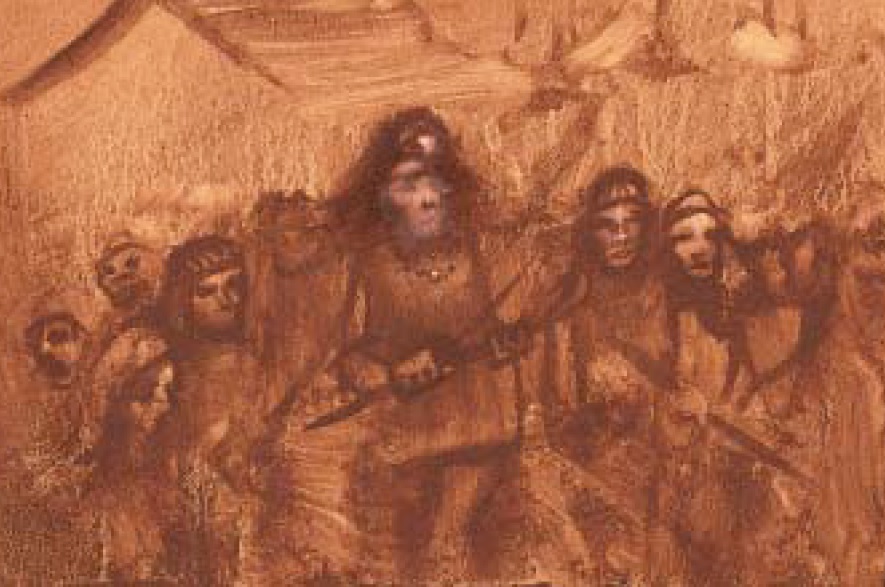 There’s a little story behind this one, in that I’d prepared for a session of that weird RuneQuest setting I keep working on at Gothcon. The planners noted some interest had arisen, including the Glorantha Etcetera panel, and suggested I do another session later that day (Saturday). I said yes, and then discovered that meant a 10 PM session. So that meant playing at 10 AM, doing the panel in the afternoon, (as it happened) playing Svart av Kval, Vit av Lust in the late afternoon, and then playing again at 10 PM. As I said to Ulf, “How old do these people think I am?!”

It also set up an inadvertent experiment, as the first group to play this with me was a young crowd, who easily identified with the coming-of-age mid-teen characters. This one, however, was mostly older people, among whom I was unusually about median age. I don’t know what this indicates, but I hope it has something to do with the strength of the material, because both sessions were incredibly strong in terms of people reaching into exactly those age-issues and exactly the fantasy and social-conflict elements that intersected with them.

Unfortunately my poor hard drive, immense as it is, gave out during this session (I should have cleared it at some point during the day), and we only get to watch two hours out of about three hours of play. Briefly, after the events you’ll see, our young heroes embarked on a difficult trip to escape their home region, encountering Sulvi, a Cze Gá cultist, and like the characters in the previous session, attempting to commandeer a boat to make it down the river, but having to fight skeletons first. Significantly, they came together as a group hard right at the moment at the very end of the recorded material, and what seems like somewhat scattered play until that point shifted into quite a little battle-band. Several characters who hadn’t done much until then really shone in the fight, and we got a good look at how effective a quarterstaff is in this game.

As I mention in the comments at the end of the video, the fellow playing Ector gets huge credit for playing the long game with his character. You’ll see that he comes off as somewhat distracted and distracting throughout the recorded portion of the session, but as it turns out, that little craft work he got started and his startingly strong conversation with Sulvi rocketed him pretty much into team leader mode, at least as equal partner with the young scheming character. And the hell of it is that he wasn’t an acquaintance of anyone there and I didn’t get his name!

In the post about the 10 AM game, I mentioned the “my dad has a boat” moment; it happened here too, but very differently, in that one of the opening scenes was indeed played with the character and his father on a boat, so using it in later play was entirely, I don’t know what you call it, normative maybe, rather that spitballed into existence late in play.