I’m playing Monsterhearts, due to a series of coincidences that fell together just right, so here you can see three undead teens try to be normal at a privileged, sequestered, high-pressure school.

I have some kind of big topics to get into, but first a couple of details. We’ve played three sessions so far, of which this video is the first, mostly composed of character creation but not entirely. One of the players prefers to remain visually anonymous so he’s covered up by an image from The Haunting, and he is also using his character name, Alastor, for himself.

I’m pleased to report that we fixed the following problems for the third session, but this one and the next display some truly embarrassing features as far as I’m concerned and for which I am mostly responsible.

Upon reluctantly adopting my own high school as the inspiration for the setting, I couldn’t manage to let go of it for Ángel to use as his own. At first it made sense to provide useful details and context, but soon, I was just being a pain in the ass in providing and directing things as he was trying to GM.

Alastor, the player, was completely new to the activity and in almost the same time-frame, struggled hard with it – successfully, in a wicked breakthrough toward the end of the second session. But not like we were showing him and he finally got it, more like we couldn’t figure out how to orient him well at all.

I’ll talk more about these when the second video is posted because that’s where you can see the big change. So if you’re cringing a few times, and not in the good Monsterhearts way, believe me, I’ve cringed harder in reviewing the recordings, and we all re-oriented at about the same time. The third session is a knockout.

Now for my interrelated topics, intended to be discussion fuel. They begin with the interplay among teen, monster, and queer. It’s an uneasy mix.

As a little prologue within this topic, the game as I see it is built determinedly, even ruthlessly to pathologize the teen social experience, accurately. I shall now use diagrams. 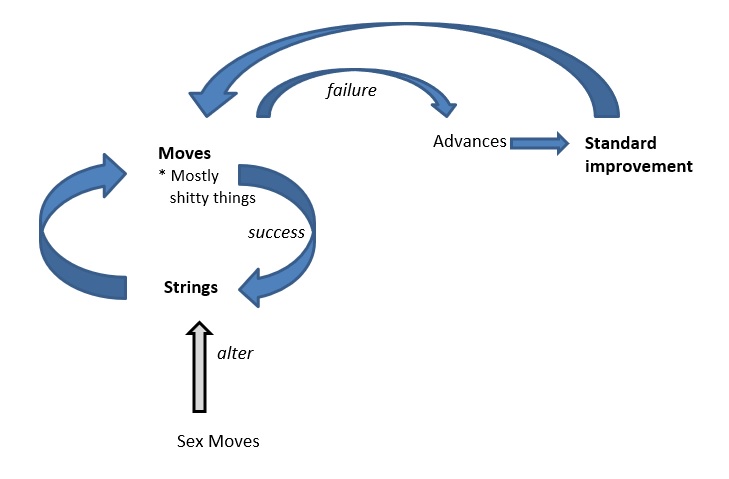 This shows the basic mechanics: nearly all Moves’ outcomes are pretty toxic, either passive-aggressively cruel or outright abusive and vile. There is no “read a sitch” or “ . The Strings are not used, for instance, to help someone do something, but only to reinforce the same kind of manipulations, forms of harm, or interferences.

You can see that dice rolls’ outcomes, although different in the fiction (you do or don’t hit them, you do or don’t shut them down), they ultimately do the same: reinforce the same old shitty actions and attitudes and the cruel forms of power. Success does so in the short term; failure does so in the long term; Strings serve specific intensifications to both of those, both in general and per skin.

There are some edge/blur cases that I’m not showing, including giving up a String on someone to manipulate them, and gaining an experience point. But it’s not an exception – it’s equivalent to a failed roll even though you get them to do something (think about it).

Ordinary advancement, i.e., improvement in what you do, and including diversification because in what I’m talking about, all the skins are the same, is the stuff of nightmare. Really bad nightmare, psychosis.

The only sort of bright spot are the Sex Moves, which make the relationships among the player-character possibly more empathic (as far as the players are concerned) and definitely more complicated. Only a few nuances of a few of them indicate more positive regard for one another as real people, but you can see the possibility flickering. Something about the sex is, if you will, “good” – well, some things about some of it, sometimes. 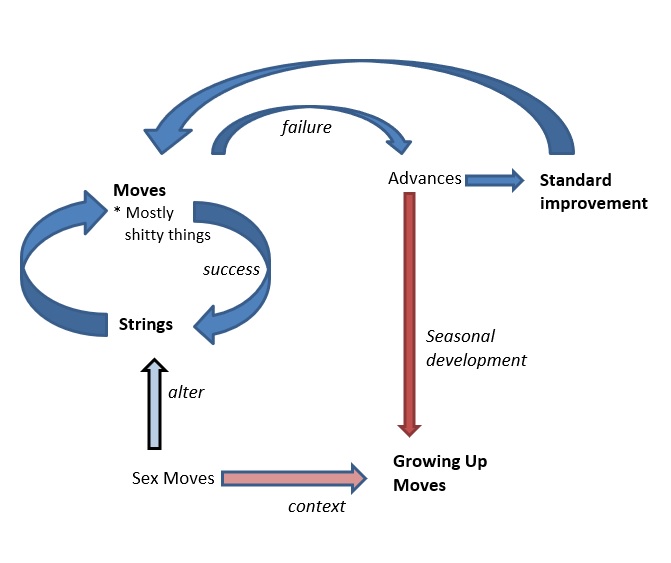 OK, so what’s this? This adds the Seasonal advancement mechanics, which you can get to only through extended play, and which include the possibility, not obligation, of acquiring the Growing Up moves. Significantly, if one character gets them (you can get two at a time; there are four), then any other may do so as well, without meeting the full prerequisites like the first one did.

If you aren’t familiar with the rules, it’s easy: the Growing Up Moves are perfectly named – they’re how people should treat one another and resolve problems rather than making them, or making them worse.

When they’re present in play, the positive elements of the Sex Moves take on a lot more meaning, and some of those Moves’ details shift around into different shapes, not as an explicit rule but as a potential consequence of particular actions or interpretations. For example, in early play, a vampire gains Strings by withholding sex and loses them all by having sex – reinforcing this skin’s manipulative power over others through a constant sexual tease. But with the Growing Up Moves in play, the latter act might serve as a startling confirmation of genuine human contact, throwing the basically passive-aggressive and manipulative Strings away.

Still with me? I was talking about interplay of all the above (teen-ness) with the characters’ monstrosity and, if not mandated, likely queerness. Briefly, is it cool to be monstrous? To be a monstrous teen given the latter term’s explicit toxic nature in this game?

See, that’s a problem, or perhaps a rather ruthless trap or test. Being a cool, socially successful teen is bad for you and others; it’s the game your character wins by refusing to play. But the power and outlawry of being a monster is definitely coded for cool. A great deal of post-80s horror media is based on flatly enjoying that role, basically the bikers and/or the artistocrats who aren’t subject to silly rules, and on being effective as a monster, capable of bad deeds and collateral damage with protagonist-armor that protects you from audience disapproval.

Now toss in queerness, which is itself seen as monstrous in the most negative sense by many other people, whose contempt and vengeful fear may – bluntly – become internalized as such by a person. It’s very easy for me to identify with a couple of the skins in the book, and not too hard to see doing so for some of the others, and I’m straight (yes, cis, white, male, fill in as you please) … and at the risk of presumption, I think a queer person might very understandably have go farther as a teen, past musing-identification, to adopt that protagonist-armor, to embrace being the monster they are already tagged as, “well then I guess I am, how do you like me now?” – again, bluntly, as a matter of literal survival.

How you negotiate this tangle – how monstrous does my queerness make me, how human does my montrosity become in that light; how does either relate to my struggle for the coolness, or my rejection of it in a fashion which remains obsessed with it; how does either relate to the monster-coolness of true outlawry, the freedom of Otherhood, and what price that might entail; and whether monster-hood can be a path to growing up … well, as I see it, that’s one hell of a fine thing to discover in play.

I’d like to think for a moment about my high school friend Ruben, his pained confidences in me during that time, our joyous if brief friendship some years after, and his fate many years later.

This isn’t fantasy-fulfillment material for me. I value this tension among the terms, and the unknown territory of what growing-up might look like while remaining monstrous. I value it as a source of instability, not a solid platform upon which my unstoppably cool monster-teen-queer character can pirouette upon. I don’t want that monster-cool/teen-cool effect to be normalized, as I see the game literally hurl you, to skin your knees, upon the difficult road of getting out of it vs. the absolute darkness of succumbing to it
So Ron, you’re saying that the way to “play right” is for the characters to grow up?

No. I’m saying that the mechanics-relevant possibility that one or more might is resonant. Whether anyone does; if so, about what; who doesn’t, and why not; and either way, what damage or accomplishments are sustained, and do we care; and what any of that might mean in terms of personal/participatory response – that is playing it right.

Our own game offers a stark, squicky subset, as there is no sensual werewolf, no troubled mortal, no primal fae … these are three unequivocally dead, inhuman player-characters in a relatively isolated, privileged community, two of them decidedly predatory if and when they go into Darkest Self. To me, this offers some really dangerous play-territory, in the good sense, meaning, not where I will drive to go but where I’m happy play could go depending on adversity and outcomes – that one or even all the characters might be conceived by anyone as villainous. Our monster-hood can well drive past that buffer of outlaw-cool, into Other territory which is far more than others’ projected bigotry.

Drastically failed actions seem to me to be the open doors to that possibility (again, as possibility) and to the myriad avenues of development from it. So that leads to the best-practices procedure for failed resolution, i.e., dice outcomes of 2-6. Does it entail literally failing the announced Move? If and when it doesn’t, then the effects are likely to grade into 7-9 territory, as you’ll see in the first roll of the game. When this happens, the character is a bit buffered from genuinely consequential, no-return outcomes based on, for example, a targeted person not being Shut Down and hence blabbing information all over school, or getting some big benefit from their assertive presence in the situation.

In conversations with people about playing this game, I’ve often run into this issue; for some reason, GMs find it easy to provide this buffer, and players come to expect it. I think it emerges directly from the coolness problem I talked about above, and undercuts the system’s dynamics, and fortunately, Ángel realized this – as you’ll see him talk about in the second video – and revamped the outcome in later play to be much nastier. A strong lesson: in this game, failures must really fail and hurt.

3 responses to “The Hunger, Unresolved Trauma, Cold as Ice”