To get a diamond, you crush the coal 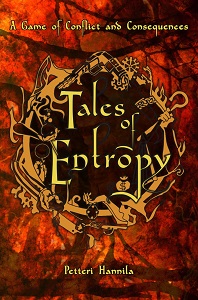 I’ve stitched together two consulting sessions with Petteri Hannila, the author of Tales of Entropy. The first part is audio only, but please view rather than listen, because I’ve filled it all with visual content. I’m beginning to make these sessions work both privately and publicly.

This client is a little different because the game is already published: here’s the RPGNow link and it’s also on DriveThru, Amazon, et cetera. Petteri’s main concern is promotion and publication strategy, but he’s open to rewriting as part of that, so we spend most of our time on the design, as our way to get to the main question.

The “guts” of the game are sound, or as much as I can tell prior to our upcoming play session, which will appear here in Actual Play. I strongly criticized the presentation which emphasized its group-setup and trading-off qualities to the extent of devaluing its consequential, driving play-features. I also raised the question of open-setting, do-anything as an attractive vs. attention-deadening feature.

All thoughts, inquiries, and comparisons are welcome!

4 responses to “To get a diamond, you crush the coal”