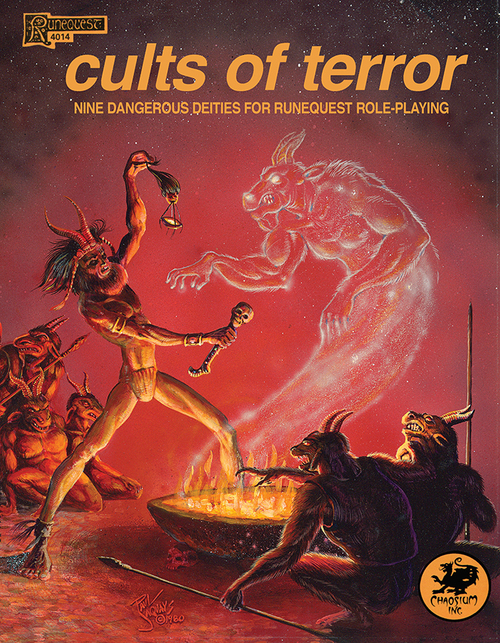 Briefly, Cults of Terror is a not merely a landmark in role-playing history, it’s a giant. Coupled with the rules it was written to support, RuneQuest 1980, and the supplement that immediately preceded it, Cults of Prax, it established a new-and-different bar for play which defined “I play RuneQuest” into almost its own sector and subculture to the present day.

All that said, what we’re doing here isn’t Glorantha. I really busted out my long-standing urge for play there using Hero Wars, over fifteen years ago, in what amounts to a life-changing game, and although I still love the material, the drive to play seems to have diminished, even when I tried again.

But an unexpected benefit recently appeared – the initial text was informed by Glorantha, but written in a more toolbox-y way which had always interested me too. I have any number of little pantheons and hack-y things scattered through my decades of gaming notes. Now, it suddenly seemed not only possible, but Do It Now in a way I’ve ignored at my peril. A bunch of notes turned into a handout for players, attached.

Think coming-of-age, brambly hick fantasy. It’s built using the same rules plus the two Cults supplements, but different metaphysics, so different cosmology, gods, rune combinations, et cetera.  I wish I could sketch what’s in my head about it, but I can’t, so Ian, Matthew, Gordon, and I just have to do it in our heads together in play.

This one is audio, and I’ve tried to put in enough visuals to keep you going. Modestly, I think the imagined content is pretty strong and worth it. Visuals next time!