Character Creation is both creative, collaborative, tactical, and a signal for one’s expectations from play. Can a definite procedure help people to approach the game in the right way?

Recently started a new campaign for Living Alchemy. Living Alchemy uses modules- characters are introduced into a setting with a few elements. You can read about my Bright Eyes module here. The character creation session went well but I feel I avoided certain traps using my personal experience. I suspect it could have been done more easily, more clearly, and quicker. (It took about two hours in total)

The new module is called The Eurydice Contract. It begins with Anya Morrell commissioning a group to retrieve her fiance's body in order to revive him. Her fiance was marooned by “Black Sam” and only “Black Sam” knows the body's whereabouts. Here’s a visual guide. 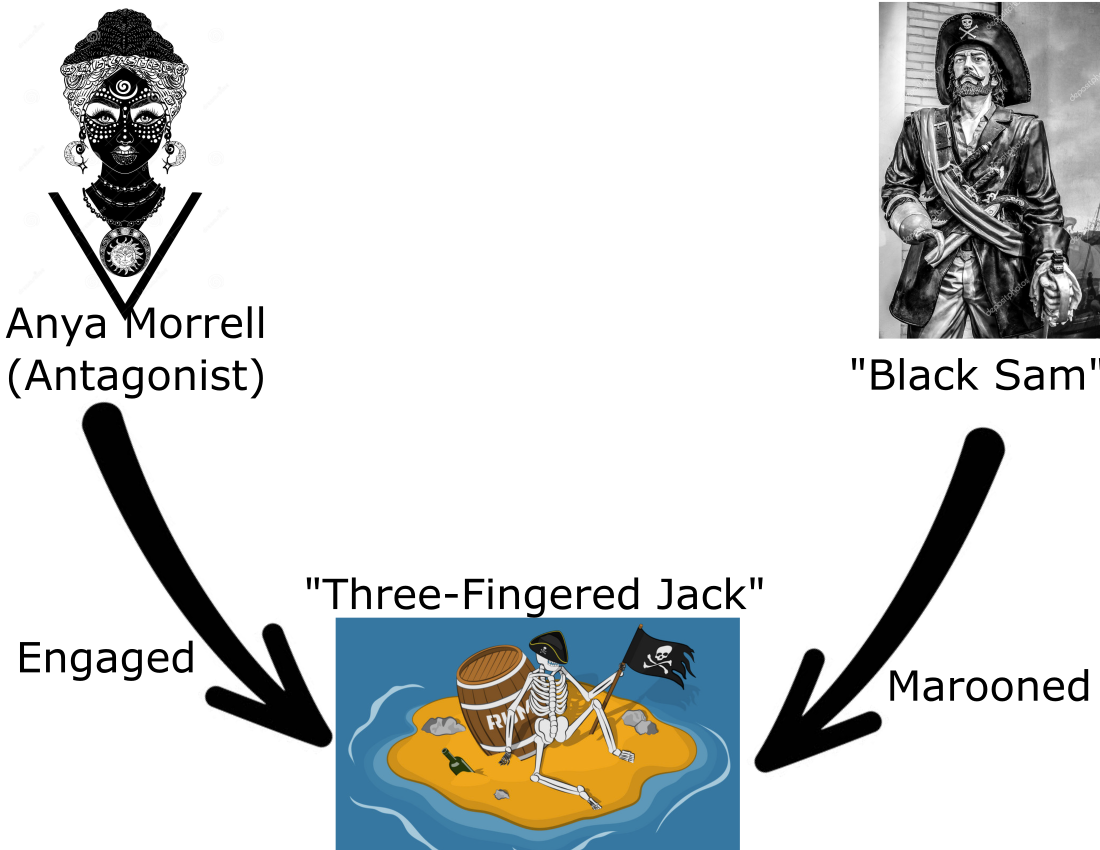 Ostensibly, it takes place during the Golden Age of Piracy in the Caribbean, but I think of it as encompassing all romantic seafaring tropes.

Here’s the procedure we used. Each player should create characters in serial. It should take from ten to twenty minutes per character.

The idea is you start with a basic person who lives in the world. They have some kind of psycho-social condition which means they are a character who absolutely must change. Then, they’re brought into the core “scenario” through a relationship. At this point, you can fill in their skills, abilities, etc. Finally, you describe their “transgression”, which will be their first action in the game.

Our first character was Sean Murphy, a newcomer to the Caribbean who fakes her death after a horrible fire she may have caused. She plans to join her father “Black Sam”’s crew (Mulan-style). Originally, she wanted “Black Sam” to be her uncle with her father being an important character. I suggested merging the two characters. Making conflicts more personal and immediate is something I frequently do.

We have Captain Theobald, a man sworn to avenge himself against “Black Sam”. After being discharged by the British Navy, he will kick his crew off the ship at the nearest piece of land and bring the slaves up to function as his personal crew.

Theobald took longer to make than the other two characters combined, partially owing to the game’s mechanics. He was introduced with a long backstory about trading undead slaves which I shut down. When people have long backstories, it’s almost always to anchor expectations about how to treat the character. e.g. “How dare you refuse me! I married the governess of this island! I’m important!” This doesn’t really work in Living Alchemy since its mechanics are robust to that kind of thing, so it’s more about managing player expectations.

The players spent over twenty minutes thinking about the features of Theobald’s ship and near-zero time thinking about who his crew was or why they followed him. His most interesting feature, raising the slave crew, was an afterthought.

Finally, we had Sinichi the ninja-pirate. Or rather, a Japanese slave freed and mentored by “Three-Fingered Jack”. His player wanted his transgression to be to marry into high society, but I thought it was too far-flung from the situation. His transgression was changed to dealing with the discovery that “Black Sam” killed his mentor.

Here is a graphical summary. 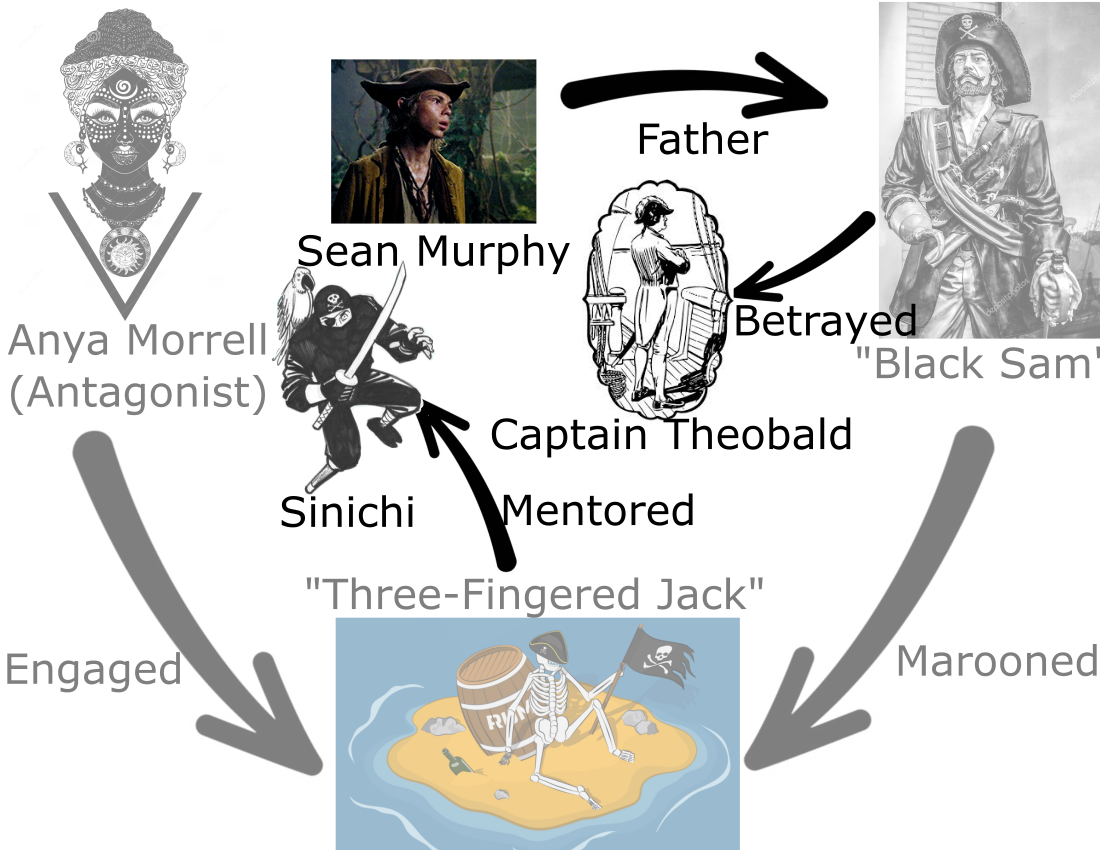 Even though the antagonist is “disconnected” from the protagonists and the players are disconnected from each other, I’m confident this will work. Still, it made me conscious of the contrary expectations.

There has to be an easier way. I might try dividing character creation into three sections:

What are your ideas? What have other games done to avoid these pitfalls?

Hey Eric, I enjoyed the write

Hey Eric, I enjoyed the write-up. That sounds like an exciting situation for play, and character creation, combined with the module/situation, seems well-made to get things ready to go.

I'm unsure of what you would have liked to have gone different in this process: the complexity? The time? The disconnect between the protagonists and some parts of the situation (personally I see them all connected meaningfully to various elements in the situation, with plenty of ways for them to become connected through play)? Some games just require some heavy lifting in character creation and if that serves the rest of the game well, then it's probably the right design decision.

Thank you very much. I like how it turned out but there were too many instances in character creation where I had to step in. I'd like it if Living Alchemy was more "pick-up-and-play" without requiring the internalization of broad principles, experience, etc. A lot of the guidance I provided was only possible because of years of experience. I'm also interested in the issues of character creation and starting campaigns broadly.

Here are some of the failure states I watch players skirt with.

The player will displace their character's vulnerabilities. If their parent/lover has died, it will have happened in the distant past. They may have struggled with condemnation, brutality, or whatever but they will have recovered from it. They will choose the least taboo and pro-social afflictions- They won't be addicted to opium. They'll be addicted to fireworks. They won't be a devotee to a child-sacrificing pagan God. They'll be a devotee of a fertility goddess who is being suppressed by the Church. There were a few examples of this in the last session-

The player hasn't considered how their character treats their affliction. Once they find themselves in play, they find themselves in big trouble with the GM blocking their attempts to treat their affliction (the GM's job). I think this happens because players are thinking about afflictions creatively and not tactically. Afflictions should inform character, but if you have a reliable way to treat your affliction the size of all your dice pools is effectively double.

.The player gets the idea the game will reward them for "playing their character." If your four-page backstory painstakingly explains how you learned each and every one of your trades, acquired each of your resources and contracted your affliction, good for you. The game doesn't care one way or another. There are no "roleplaying bonuses" in Living Alchemy. How the group feels about the narrative or how cool you are has no bearing on what happens in any way whatsoever.

And none of this is the player's fault. Of course, the player will want to reduce their character's vulnerability. That's tactically sound! Exactly what I'm faulting them for not doing when considering their affliction! Like I said, they're expected to do a bunch of contradictory things. Would love to mitigate it as much as possible with a good clear procedure instead of asking the GM to read a hundred pages of "GM advice".

I read your comment a number of times, trying to think of helpful things, but I think it comes down to this: it's hard for me to say without playing your game. Especially the Afflictions part -- it sounds like that is not working as intended in play.

Regarding the Vulnerabilities, as you said, trying to downplay them at the point of character creation seems only natural. Why not get the GM involved at this stage? If one of the GM's jobs in Living Alchemy is to present opposition, perhaps the player starts by offering a Vulnerability for their character--which the GM then has the authority to alter: "He's addicted to what? No, no, no; we're talking vast tracts of time lost in the opium dens, man! He's a drug addict!" And then perhaps the player has the final authority to accept or tweak what the Vulnerability is.

I'm not sure if this sort of design-kibbutzing is what is helpful or appropriate here, though. I'll keep thinking.

Since Adept Play doesn't do design conferencing type discussions, I have to think about how to get into this topic. I do like it as a post; it's something you're playing and this is an important procedure. But we can't slip into (allegedly) fixing your game, or if I want to get into design questions, I have to reserve it for Consulting if you're interested.

Therefore the aspect that makes most sense to me right now is tied right into my Seminar post, Situation: primal and primary. I don't think we, in the early or preparation phase of role-playing, ever "make characters" or "make setting." I think we make situations, knowingly or not.

Therefore the pitfalls or problems or missteps or misunderstandings or bad design all concern the potential for an unplayable or mis-understood situation. It very roughly falls into two types:

Quite a lot of the abominations masquerading as "Expert GMing" rhetoric represent these two things as the default for people's role-playing experiences, and thus finding deceptive or authoritarian methods to force them to do something together.

The essential features of a playable situation are constraint, uncertainty, and change. What procedures, information, activities, and decisions prior to play actually get there? The possible configurations, and about what fictional things, are potentially infinite ... but the functionality is not, nor are its boundaries from those failure states described above.

Showing people "setting stuff," then saying "make a character" with a variety of portraiture categories doesn't do it. Sometimes we get to a playable situation with these methods in place, but it's always a crapshoot because the way we get there is not by using them.

I recommend checking out the Consulting posts about Tales of Entropy and Compact Stories, for examples, respectively, of a game I encountered too late to help and a game I could help, for this exact issue.