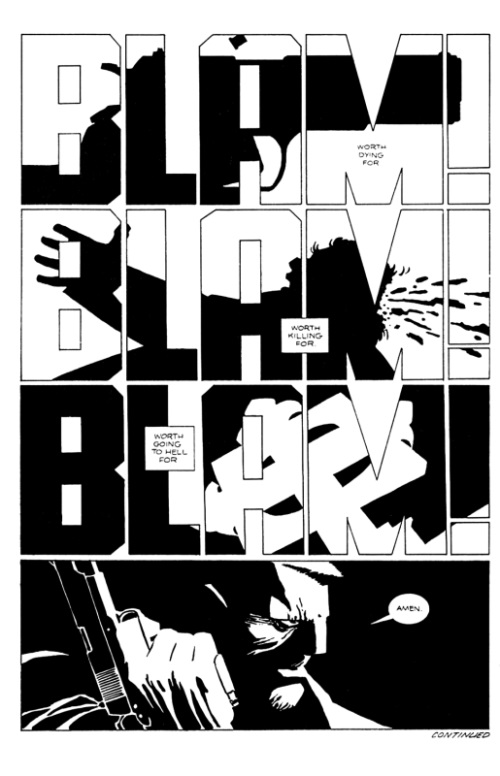 Jon made the mistake of musing online about playing The Pool with a Sin City, To Live and Die in L.A., Haven: City of Violence way, and like two predators spotting the straggler, Sam and I struck. Jon’s introductory sheet is attached, and so are our starting characters, created after reading it.

As you’ll see in those files, Sam and I did not create any Marvs or “deadly little Miho,” opting instead and independently for shifty grifters. Unlike the image I’ve chosen, there has been no “blam blam blam” … yet. We play for one-hour sessions and so far just one. So the night is young, so to speak, and if our fast-talking characters keep talking so fast, one of them is likely to walk right into a page like this one and very likely not walk out.

As far as “let’s talk about The Pool” is concerned, I draw attention to the clear secondary role of speaking when you’re not the authoritative contributor. I’ve decided this is a serious sore point in role-playing generally and, as with so many things, merely thrown into more obvious form by playing this game.

Here’s what I mean. Let’s say Bob is understood by all to be the opener of scenes for this game (one application of situational authority). Bob says where we are, who’s there, et cetera. Now, two kinds of secondary speaking may be involved.

Opening a scene is merely one of the hundreds of inputs into play for which this point applies. Anything that anyone says – always. This isn’t a player/GM issue but a feature of the medium. [adding instrumentation for constraints on what you say can be put anywhere you like, like rolling to hit]

Neither bullet involves consensus in terms of content. I distinguish very sharply between (1) required input and application vs. (2) consensus. Bob cannot say what I should say, and I cannot say what Bob should say. We have to hear what each person says and sooner or later play will reincorporate some of what we heard, i.e., we’ll say something more about it or its effects.

If you’re just nodding along, “yeah, yeah, uh huh,” then I ask you to reconsider. What I’m describing here, which I consider completely healthy and even necessary, is not favored by our hobby culture and its concept of The GM. It’s related to equating talking with control, and more than one person talking as competing for control. 2021 brought me several remarkably bad experiences in play when the Bob person barely tolerated the first bullet, so that “what do you do” was extremely pro forma, sometimes perceiving this input as distraction to be smoothed over; and they reacted to the second bullet as an outrage upon play, spoiling it, or showing off, or defying them.

Check out the way we play in these. It is definitely not consensual storytelling, i.e., a festival of how-abouts and negotiated agreements. Nor is it a fierce competition for who controls anything. We have our jobs, and we can’t do them without each other.

17 responses to “Bad doings in Bulwark”