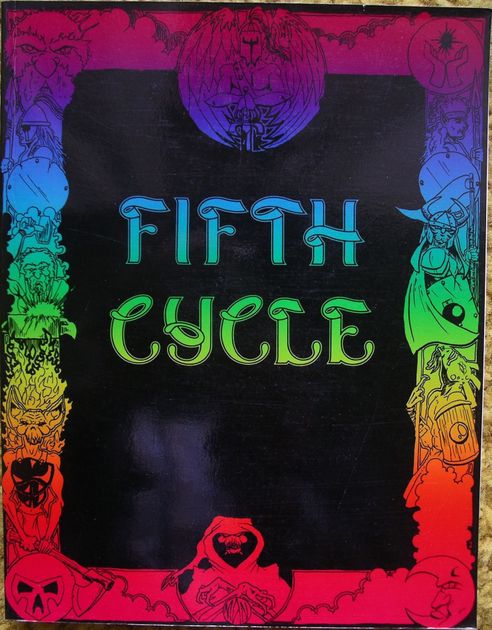 Having played Forge: Out of Chaos for over a year, Jon, Sean, and I decided to put the game temporarily on the shelf and take up another fantasy heartbreaker. I’m now running Robert Bartels’ Fifth Cycle, and we had our first session this week. We were mulling over other possible candidates, but this game won the vote for two reasons: Its system is clearly, efficiently worked out and presented, and it has a strong concept driving its races, cultures, and setting. We were excited to explore Bartel’s unique take on fantasy.

We are going to approach the game nearly as written, but with one major exception out of the gates. I decided early on to let the players choose whichever character race they wished to play. The game’s core rulebook makes you roll to see if you can be a non-human, and it makes those odds difficult—which is quite an odd choice especially when considering the spicy “Military Races” supplement that adds some well-conceived human-animal hybrids to the mix. The supplements to Fifth Cycle make it clear that Bartels himself was having second thoughts about the hurdles he put in the way of playing the non-humans.

Jon has opted to play a Kyton named Xe’blek. This is the oddest of the Military Races. Kyton’s are partly insect, and they possess a hard exoskeleton, one arm that serves as a sharp weapon (called an impak), and antennae. In the world of Fifth Cycle, all the non-human fantasy races are the creation of cruel magico-biological experiments by the so-called Tyrant Mages who lived centuries ago in the Third Cycle. The Kyton are unique in having a strange racial memory of being human and then transitioning into their current crab-like insect state. Jon is leaning heavily into this idea: He’s given his character some skills in archeology, and he’s playing Xe’blek as a character with a strong drive to explore and study buildings and artifacts of the Tyrant Mages to gain insight into his own origins.

Sean, meanwhile, is playing a human named Llewyn who is a student in the College of Earth Magic. His character is from a family of thieves, so his skill set will nicely complement our Kyton friend, and we’re looking forward to seeing how this odd couple develops.

At the end of this report, I have links to various play documents and a summary of the events that transpired during the opening session. There’s also a rough video of our play. If you’re interested in the developments of Xe’blek and Llewyn, please look those over.

But I’m going to focus this report on what went on behind the GM’s screen, concentrating especially on some of the challenging aspects of preparing to run this game with the hopes of providing some insights into GMing and of sparking some discussion.

Fifth Cycle is by turns intriguing, sparse, and conflicted when presenting the idea of adventuring in Dolphinia (Dolphinia is the region which Fifth Cycle uses as its default setting). For example, there is a notion that a good part of game play will be focused on exploring the “Third Cycle Sites” of the Tyrant Mages. The game is so intent on the idea that it stipulates that the government agents of Dolphinia strictly regulate and tax those who dungeon delve, and adventuring parties need to either obtain an official charter (a full page sample of such a document is provided) or face harsh consequences if they are discovered. Despite this, there is little specific advice about creating actual sites. And when you look at the adventure seeds in the supplements, many of those lead to overland, wilderness, or city-focused adventures, not dungeons.

The “Starting a Campaign” section suggests that skilled people in Jenmaryn City (essentially a capital in the Old World) are often found guilty under trumped-up charges and sent off to Dolphinia as their punishment. So that’s how I’ve started things: Our player characters are prisoners (and slaves) on a ship named the Golden Squid bound for the reckless city of Skilletan. But I’ve already set up some competing factions both on the ship and en route which makes the ultimate arrival point of the characters undecided. One crewmate (Sadie Dawg, pronounced “Shady Dawg”), for example, is a spy for the Brotherhood of Runwin, which is a militant abolitionist group. There are three other convict-slaves on board in addition to Xe’blek and Llewn, and their disposition and drives are not necessarily in accord with those of our player characters.  The crew itself is a mix of loyalists to Captain Whitemane and other less-seasoned (and perhaps more persuadable) novices. This is not to mention the fact that there might be pirates, brigands, or coastal guards along the way who would be interested in waylaying a ship carrying valuable loot and contraband. I’ve got a sense of what the three major ports of call in Dolphinia have to offer, but I’m happily leaving it to Xe’blek and Llewyn to figure out how things will shake out. It’s possible that we will see them in the gladiatorial arena in Skilletan, but we might also see them on the run in some wilderness region that has not yet been explored. They might even opt to abandon Dolphinia entirely to return to some place in Jenmaryn or elsewhere.

To prepare the Golden Squid for our first session, I worked out a basic map of the decks and had some details worked out for Captain Whitemane, Shady Dawg (the secret abolitionist), the First Mate, and the Quartermaster. I have each of those characters on separate 5×8 index cards with their statistics and important notes. For the rest of the crew manifest, I have a list of names and some basic ideas, and I also have some basic statistics for generic sailors, thieves, etc. which I can use in a pinch. The game makes generating stat blocks for NPCs a bit work intensive, so I’m not feeling compelled to have worked out all the details for the entire crew manifest.

I did not anticipate that one of the three NPC convicts (a man named Fabian Rycroft) would play a significant role in our first session, but I was able to use one of those sets of generic statistics for him when he was called into a brawling competition. To add even more surprise to the game, Fabian (whom I allowed Jon to play for the purposes of the bout) ended up rolling a rare Critical Hit against the ship’s champion fighter, which left her sprawled and hopeless on the deck. This will garner Fabian some special attention from Captain Whitemane, who is now going to consider Fabian as more valuable cargo. For our next session, I’ll have Fabian more fully fleshed out on his own index card . . . and he’s also going to be promoted to the more secure brig housing Xe’blek and Llewyn.

On a more macro level, I’ve jotted some notes about some events occurring around the three major ports of call in Dolphinia. These consist of the capital of Gravesend, the riotous city of Skilletan, and the southern city of Markstrand. Some encounters will reveal this information to the players, and that might entice Xe’blek and Llewyn to try to head one way or another. But things are faintly sketched now, waiting for the players to decide where exactly the game will go.

There is some dicey and spicy material in Fifth Cycle that was the focus of pre-game discussion. When you look at the world map of the game, it is apparent that you are viewing a scarcely veiled reworking of the Americas in the East, Europe and Africa in the West, and the Atlantic Ocean in the center. In some sections of Dolphinia, slavery is permitted, with Mixtla (which geographically approximates North Africa) being the source of the trade. There’s a group known as the Shrouders which goes around terrorizing and brutalizing those who are not human. The idea of the non-human fantasy races being the outcome of evil genetic experimentation by the Tyrant Mages adds another grim aspect to the world. To top it off there are religious cults and practices woven into the fabric, and while some of these religious trappings are innocuous, some are not.

One option for play would be to excise all problematic aspects, but that would give us a rather impoverished, bland, and generic fantasy game. We’ve opted to shove none of these aspects of Fifth Cycle aside. Instead, we are squarely signalling elements that might lead to moral or social quagmires, and we’ll be forging bravely ahead knowing that we are all alert to the potentially incendiary material.

A number of factors are allowing us to operate with this type of forward approach. At the outset, we’ve been candid about signalling topics that might create difficulties, and, since our core group has been playing together for over a year, we can be comfortable stopping scenes to work through or around minefields when they emerge. Also, Fifth Cycle has such a host of invented, imagined, and reworked elements that analogies with the real history are everywhere fractured, inverted, and twisted. As a result, when these elements appear in play, they are fantastically different from their real world counterparts, though an underlying sense of their moral status always remains intact. For example, in their creation of the fantasy races, Tyrant Mages resemble mad Nazi eugenicists gone haywire. But the Mages themselves are now ancient history (they were eliminated two Cycles ago), so it isn’t like the characters are able to intervene in those activities. Instead, we now are left to deal with the multitude of different creatures and races the Tyrant Mages left behind. It’s quite possible that there will be some evil sorcerer who will try to research the spells and rituals of the Tyrant Mages to create some new hybrid mixes, but that person is going to look and behave quite different from any kind of morally bankrupt geneticist of the 20th or 21st centuries.

We’ll try to provide semi-regular briefings on our foray into another fantasy heartbreaker. In particular, we should give further consideration to the game’s approach to magic, combat, skill checks, and other essential matters. Stay tuned.