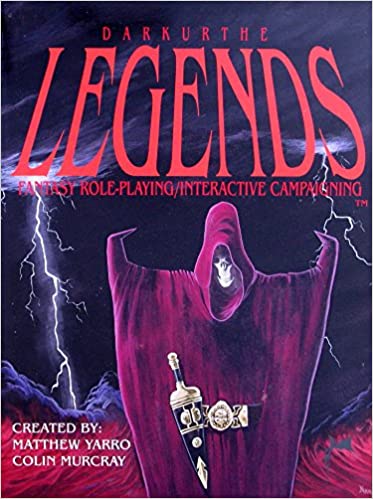 As the shadows of evil stretch across the land, calls come forth from the ancient kings of Darkurthe for champions.  Only a few brave souls dare to face the other-world horrors that were thought to exist only in legend.  Those who survive are changed forever, unable to return to the ordinary lives they have left behind.  They have learned that …FROM TRIALS COME HEROES, FROM HEROES COME LEGENDS.

For those not familiar with Darkurthe Legends, it is a gritty fantasy heartbreaker from the 90s.  I haven’t gm’d in many years, so this is my first post on Adept Play about my first gming experience in well over 20 years.  There are plenty of reviews of this game that go into the setting and system and do a fine job of it, so here I will just discuss our play sessions briefly and discuss any issues as they come up.

We didn’t have an official session zero, but communicated frequently via discord messages regarding what we all were expecting out of this game and we all agreed upon a more casual aproach and I think that it worked out great.  Robbie referred to it as ‘hard framing’ the sessions.  We decided on a location and just jumped into play quickly without too much setup and not very many expectations.  As far as prep goes, I created several characters, detailed some locations, picked a few monsters and set up a few interpersonal relationships.  That may have been too much even.  I was really nervous about this, but it was a blast and will only get better.

Before we embark, Robbie’s character, a Living God, attempted and failed to gain a channeling ability called ‘Gate’.  My only issue is the difficulty for casting spells is so great, I feel that starting magic users should have some other bonus in order to be a magic user-but enough of that!

Ron rolled spectacularly well during this session, leading us to wonder if the dice will fail just as spectacularly during one of Darkurthe’s gritty combat turns.  Travelling north with a caravan headed to Ithkmar, we split off into the Mehru Fen swamps in search of at least one of the seven cities of the necromancer kings.  In the swamp, we encountered a strange creature and fabulously avoided getting snatched up by it with a ’19’.  Ron’s character navigated us through the swamp with a few outdoor survival skill rolls and we managed to find a path to an NPC that can be of assistance.  Our session ended here.

I’ll say that I love many of the systems that this game offers, so far it’s just been the usual d20 rolling as far as the system goes.  As far as setting goes, Darkurthe really has a lot to offer.  Each place on the map has a firm foothold in the lore and there are monster entries that include possible NPCs and a lot more.  If I were to plan a campaign, I mean really plan one out, there’s plenty of material for consideration.  As we progress further into the world, my posts will improve, I just had to get this out while it was fresh.  Stay tuned!

Gen X’er, perpetually collating, never completing. I was a member at the Forge and posted regularly there. I have several projects in the works and look forward to being able to say that I’ve accomplished something.