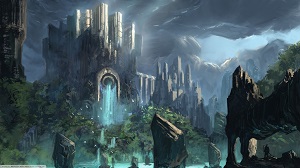 I want to talk a bit about a play test session for a game I am designing. The game is called Citadel of Time and it goes something like this:

Trapped in the Citadel, you pursue missions to retrieve graels for the Castellan's Great Project. Moving to different points in time, your success or failure hinges on overcoming your own issues and the obstacles of the time you find yourself in.

CoT is a structured (not sure “highly” is applicable or even needed) and episode focused RPG. There are four phases based upon the four act structure of Kishotenketsu. The four phases are CROW: Castellan, Road, Obstacle, & Wounding. That is all I will say about the game for now, as I want to start into the play test. But two things first.

Locally (Northwest Atlanta, USA) we began an Indie RPG meetup. It has turned out quite well. The only rule is no D20/5E/Pathfinder as we can get all that we want. Several of us are designers or work in the rpg sphere or both. This day we divided up between my game, Citadel of Time, and Cat Cthulhu or Cathulhu? A chtulhu game aimed at the younger crowd. Play in Citadel were Egg, Dawn, and Becca.

One of the core concepts of CoT was to be minimalist. Easy character creation. Small character sheet. This is where my obsession with 4×6 cards in play really began. CharGen is a simple case of placing an array on the Attributes as chosen. It took ten minutes. The array was 6, 4, 3, 2, 2, 1 or 0. The attributes were (and are) Combat, Athletics, Guile, Legerdemain, Roister, Scholarship, and Sorcery. Sorcery had to be 0 unless you took a 6. You were either a sorcerer or you weren't.

Egg chose to be a sorcerer and his concept was that of a Cyberpunk sorcerer. Up until that moment I had in mind that the dregs of society who were the characters were of a more fantasy bend. BUT I realized.. Time Travel. The Citadel exists in all time periods of the world, past and future. Instantly made some notes on this. Dawn played a hunter or ranger and Becca was a bit of thief.

C is for Castellan

There is no origin story. Characters, the survivors of the world's ending, eventually find the Citadel, explore it, and realize they can never leave. After a time they realize their only way out is the damn Great Project. So they agree to go on missions for the mysterious Castellan.

In the Castellan phase the GM (The Castellan) interrupts the lives of the players by choosing them for the next mission.

In this case the entire Citadel was celebrating a previous group returning a Jade Goblet. I had the players make a Roister roll to determine how well they de-stress before their mission. Those that failed pulled a card from separated low cards in a 52 card deck. This would be a complication for their mission that they had to settle up with before the mission ended. I.e. before they came back to the Citadel via the Castellan's Time Travel mojo. One player failed and pulled a complication.

Attribute scores are auto successes. Players then pull from a dice pool (10) and bid a certain number of dice. At the time, a 4 or 5 was 1 success and a 6 was 2 successes. Failed dice were lost from the pool. Three 6s was a critical and auto-refresh.  When the pool runs out they lose an anchor point (they had 4 at the time) and the pool rfreshes. Losing all anchors means Fading back to the Citadel and and gaining a Decay point. No one faded in the game we played but some got close.

Mission: The grael they would seek was "The White Wolf's Angst". I am a bit of an Elirc / Eternal Champion fan.

In the Road phase they went towards a town that might have someone known as the White Wolf, who was fighting some local bad people. Along the way they came across a party of these bad people. I pulled my own complication cards for them to battle. With such already high chances of successes, they went through the fight very easily. This was one reason I later decided to make slight changes to have Attributes and resolution worked.

Now comes the Obstacle phase. The characters meet the White Wolf, who is a dark skinned woman wearing a wolf's pelt. In the fiction she is an Eternal Champion of balance. That is not canon for the world, I jsut had that as a fun bit for the playtest. They also learn that her emotions affect the land and the death of her lover, of whom she has a painting, are the cause. Or might be the cause, but the players figured it out.

The White Wolf agrees to give up her painting of her lover if the group can bring her the head of a local sorcerer. This is the Wounding or the price of victory. It needed to be more challenging than it was. The boss fight was fun but anti-climactic. They go back and get the painting. Fade to the citadel where the Castellan is waiting for them.

Everyone had fun, including myself. The game plays fast and is full of improv. And it was a great playtest because it showed me where I needed to tweak some concepts.

I realized resolution was too easy. And the CROW concept is good, but needs to be either very stylized, or de-emphasized. I have since made adjustments to how Attributes, Sorcery, and Pools work. But I love the idea of bidding dice.

I am sold on the idea of death in High Adventure games, which CoT turns out to be, should only come after significant play in campaign or via experienced characters in one-off play. My next playtest (I have had a few) will be all characters with one Decay point left. I want to see how that might affect the game.

Sorcery (or Tech) was not as cool as it should have been, yet it was powerful. Right now, when a character is testing Sorcery, successes are lost as opposed to failures. This represents a price to pay. Sorcery is also more powerful (a 6 on Sorcery is still 2 successes), but obviously high success means burning through dice.