Mind the gods and mind your map

I’ve mentioned the “Escape from Queztec’l” solo adventure from my High Fantasy corebook a couple of times in recent videos, which prompted me to bust out some dice and play it. I was a player in a game about thirty years ago, but haven’t tried this feature until now. I’m especially interested in it as a teaching device, for which the text is pretty explicit.

Aside from mechanics, what this adventure teaches is the importance of characterization and situation. Most superficially, it could be interpreted as “your GM is on a toot about his or her special wonderful setting, so you might as well suck it up and pretend to care, or else you’ll provoke too many combats and die.” But given barest interest on a player’s part, the scenario rewards attention to the setting quite well – culturally, for the god stuff (which is what saved my bacon), a bit behaviorally in terms of Xenon’s self-image as gentry and how you talk to priests, and geographically, in that the cliffs and the direction water flows figure into decision-making,or should. It’s the same quality that led me to like certain Tunnels & Trolls solo modules a lot better than others, and also to appreciate the more complex “what do you want your guy to be like” decisions in the Fighting Fantasy “Sorcery!” series.

It helps that this particular micro-setting is quite evocative, aside from the eye-roll-worthy name for the land (Lysdexia), and leads me to want to adopt it for play and build into more and more detail and content. 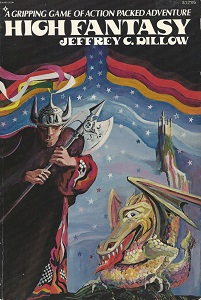 Part of learning is making mistakes, and I made a couple of interesting goofs. The first is forgetting the Death Dealer’s damage bonus while running the combat rounds, even after reminding myself of it just before diving into the dice. I did hit him pretty good a couple of times, so maybe it wouldn’t have made that much difference, I don’t know.

What that illustrates is something I’ve known for a long time, going back to T&T and FF solo play: that I consistently fuzz out in the fighting subroutine of these numbers/text games. I’m an imaginative fighter in my fantasy role-playing; I’m always using the immediate terrain and coming up with some use for stuff we happen to have, and always striving to apply the more nuanced combat options. None of these is available in these designs.

I get that its goal was to teach me the basic math of attack, hit, damage, but without the ability to build upon that immediately for making the fight about choices in the moment – as opposed to a fairly predictable grind-down based on who’s luckiest earliest – my interest pretty much bottomed out in all three fights. So the real lesson was to motivate me to go to the main rules and try to get an idea of what I could do in a more group-based and less trade-the-hits fighting context.

The second goof was mixing up east and west for a minute there (going west to 59 when I was deliberately heading back east to 278), but that turned out to make sense, as Xenon might have gotten turned around for a minute, and the choice just bumped me back where I wanted to be anyway given the immediate layout.

Another interesting feature is re-playability. Granted, one or two things could be unfairly known, like what happens if you decide to fight the guards at the start, or what priest will say in the tomb room, but I never did meet my character’s intriguing cousin, Dazia; nor the mysterious Xiux whom the chambermaid mentioned; nor get to interact with a Soul Keeping gem. Therefore playing again and turning a different corner or two would probably still be a lot of fun.

Because as it turns out, it was fun and taught me a lot more about the game, both mechanically and aesthetically, than I could probably have absorbed through descriptive reading.