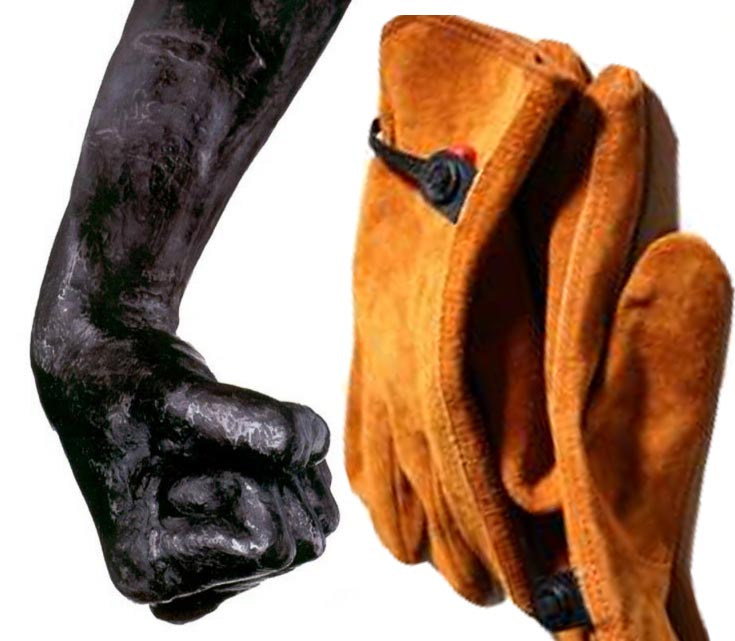 “Authority.” Ever since I first articulated the concept in 2004, people have broken on the word.

No surprise, really – anyone even calling themselves “the authorities” are openly, non-ironically declaring themselves to be assholes wielding arbitrary force. Everyone has grown up wth the hip slogans “question authority,” “fuck authority,” and memes of “respect my authori-tay.” Applied to role-playing, the widespread non-play based on “GM says” creates an instant association with dictating every interpretation and application of what anyone else says, including acceptance at all, as well as with deciding whether any outcome does anything and how much.

To the role-player trapped in a weird power-struggle over what happens and who “has to” accept things and like them, authority simply must mean nothing but the iron fist, and the only question is whether it’s wearing the velvet glove or not.

So when I say things like “distribution of authorities,” images abound of people humbly attending to what they’re told, or shoving at one another to see whose authority (as they conceive the word) will supplant someone else’s. I know why no one else uses the term or refers to it at all, walling it away with “Ron things” that aren’t important or maybe embarrassing. I know why the very few who say it do so only to call for another word.

There’s only one problem with that. It is the right word.

Authorities refer to a person saying something about something in play, which is now considered known and available for others to act upon. Robbie mentioned during a People and Play class that it makes perfect sense as authorities in play, as opposed to authority over other people. I paid some attention to this during the next time I presented that class, and discovered some very interesting, relevant things.

The first is the logical sequence/connection among these points.

That is “having the authority” – for the thing, how we hit a switch or signal in any what that this thing is this thing, going forward. Author-ity, directly related to authorship in the purest meaning of that term: a thing is not known/established, and now it is. It is best understood in terms of the real-live people relying upon one another to do it.

Which leads to the second point: that play can’t occur unless at least two authorities intersect.

And here is the third point to finish things off, which is related to the unpleasant fact that I do not teach about aspects of whatever people may be doing around an alleged role-playing table but which is not playing.

Misunderstanding or violating these two bullets are the toxic outcomes of non-play. Specifically, being subject to a person who overrides or basically invalidates anyone else’s authority, as the arbiter of “whatever goes in” and “whatever comes out.” I don’t care if it’s one person or a bunch of them.

Those are what come of thinking we’re talking about authority over people.

I really hope I can get your understanding and support for more dialogue and accurate applications, in that public dialogue, about authorities (plural) in play.

From the discussion about the first presentation of this point at the Patreon:

Jesse: Yeah, it’s difficult. Within just a few hours of reading this I saw someone talking about “authoritarian GMs”. Fortunately, they weren’t implying that all GMs were authoritarian. Similarly, I saw another post about how metagaming is a gateway to collaborative storytelling and that GMs who clamp down on it are afraid of having their power overthrown.

So, breaking the simple concept of authority away from the authoritarian behavior is hard. The current political climate in the U.S. and elsewhere isn’t helping things either.

It’s really obvious the first time I bring up authorities in this context everyone jumps immediately to, “so, everyone else just shut ups and takes it.” And is instantly met with push back about “collaboration”, “consensus” and “consent.” Then I take a deep breath and explain and if I’m lucky it’s calmed down to, “Okay, yeah, I see but dude you need another word.”

Don’t know how useful this is (it probably isn’t) but I’ve experimented with the phrase “right of way” because for whatever reason that still carries with it the idea of checking in around you and the concept of “yielding” if you want. I would prefer to just use the authorities language but it depends on whether or not I have the energy to go through the ,”Oh, so you’re RPG Hitler phase” of the discussion.

Helma: that reaction of not listening to how you describe authorities before accusing you of promoting authoritarian behavior is probably at the core of the problem. I really don’t understand what happens there. Don’t think it’s only because I translate everything we say anyway – and I don’t translate authorities in our discussions with the German Herrschaft (my online dictionary gives at least 30 options anyway, of which I like Handlungsvollmacht best).

In the case of our use of everyday terms we assign specific meanings (authorities is not the only one, think of IIEE, bounce …) I know that we (you) have developed a nomenclature that works for us and our topic, same as nomenclatures used for other topics can use everyday words and give them specific and “unusual” meanings.

Maybe you can avoid the rejection phase by first explaining what you are talking about and then add “that’s what I/we/Ron call authorities? I usually have difficulties even explaining those things – I’m simply bad at theoretical talking, I’ve come to accept the fact that I usually live my life and make my decisions by instinct which makes me a bad “teacher” and is frustrating in it’s own way.

Me: The only solution, I think – beyond the necessary requirement of establishing a good discussion in the first place – is to work from the imagined content outwards. If X is in the backstory, or in the situation as it stands, or established via an outcome, or factored in as the result of an outcome … then how did it get there?

Then the task is to recognize that all “rules-y” talk about that, e.g., the table told me what happens, the dice told me what happens, the scenario text told me what it is, the resolution rules told me to make it up, my prep notes told me what it is, are subroutines to the principle that “I have to say it and be heard, and everyone else is relying on me and no one else (at this point) to say it.” From there the substantive issues can be raised, first and foremost the topic of the post: overcoming the basic mistake that “to say” is some kind of magic status to make things up whole cloth AND to state what happens without constraint. [This is so important! It’s why people think role-playing is to sit there and chirp upon being cued.]

Topics from there – and impenetrable until then – include: