The one thing I regret is not making up twenty characters across seven game titles and launching into fervent play right away. This was so much fun.

There was a Renaissance, and no one noticed. Or only in scattered experience, in the insistence upon the recognition of this or that title (for me, The Fantasy Trip), individually, against the consensus or hegemony or whatever you want to call it. Fantasy had resurged in a new medium, and in the words of Commander Kor, "it would have been glorious."

I went back and forth regarding a couple of candidates to include, and let the conversation make the final decision. That’s why Arduin gets barely a mention, Blackmoor doesn’t get any, nor does City-State of the Invincible Overlord, perhaps because they are maybe tied more tightly to D&D than the other games. Reflecting on that, however, I think Blackmoor should have qualified and received some discussion.

Contrary to the leading image, some of them get left out due to unfamiliarity, the four to the right of the bottom row. Here soliciting contributions from knowledgeable parties! (yes, I read the Wikipedia and other internet summaries; I'm talking about people who have read and/or played them)

It's a bit rambly, so I focused through some editing. Later, I might present the snippet where I basically just lost it over Liz Danforth, for entertainment purposes.

I followed up on Rod's mention of the great work by Jennell Jaquays and Tim Truman on The Enchanted Wood, an adventure scenario for DragonQuest, and was rewarded with this link - enjoy.

I also followed up on Bushido, getting a copy of 2nd edition. And … holy moley. That is one playable game, with perhaps the single most consistent and understandable core mechanic of all these titles that I’m familiar with. I was especially happy to see that right after this paragraph …

… which seems like it’s setting up to blow past the topic, is then followed by many pages and careful rules for doing exactly those things, for every significant social category in the setting. And they are good rules, full of fun, and as I see it, as full of battles, intrigues, violence, and wild magic as the "just a guy" play that preceded it. High-level social, political, magical, and even religious-philosophical play, here we come!

Also, James M and Victor R were kind enough to consider the question of how exploring catacombs was related to TSR’s relationship to Empire of the Petal Throne. Apparently my speculation is accurate that Barker’s setting gained significant presence of and emphasis upon extensive underground networks full of danger upon becoming a TSR product. Also, that presence and emphasis diminished afterwards, as Tékumel and TSR diverged.

I feel like doing some more focused character creation and prep, for pretty much any of these games for which I own the texts. Anyone up to join me? Use the Contact form; we’ll set up a little session.

Lest I be remiss, here's that character sheet: 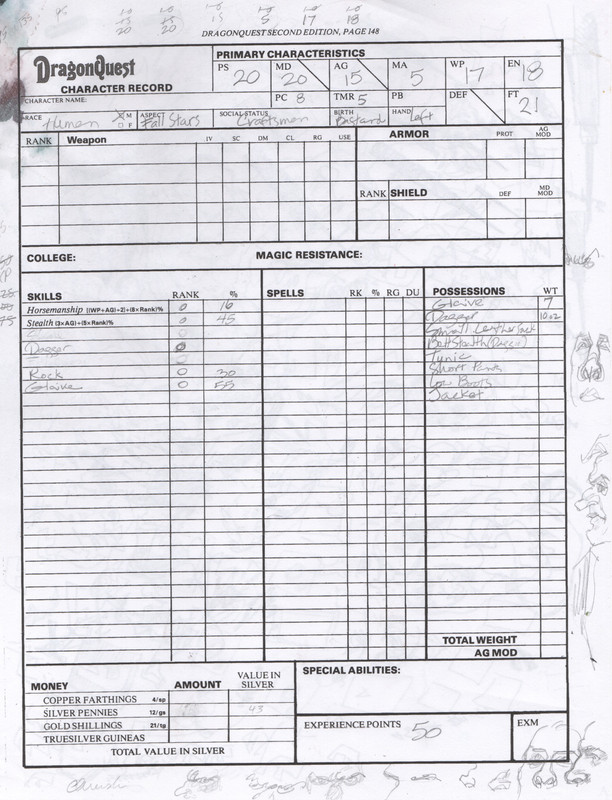 Add DragonQuest to my Tunnels

Add DragonQuest to my Tunnels & Trolls description for the distinctly scruffy gear and appearance of starting characters. I admit, at a glance, they certainly have guts. "What are you doing this morning?" "I'm going on an adventure, to confront creatures and foes who are guaranteed to be capable of killing and/or eating me." "... Dressed like that?" "What? I have my rock."

The row of 0's is also a little daunting. This was a real issue for me in playing fantasy games at that time: was my character an up-and-coming fightin' person / wizard with an opinion, or not? Because the less-than-impressive array of ability argued for the latter. Not too much to ask for one free 1-rank, is it?

RuneQuest ultimately made more sense to me in that regard due to the mid-teens status of the starting characters (ignoring the older/experienced option in the appendix for the moment). What balked me back then was how to get everyone else in the game into the necessarily region-based mind-set for such play, i.e., acknowledging and working with mid-teen status.

Yeah, it's a weirdly dinky

Yeah, it's a weirdly dinky amount to start with, especially considering how comparatively generous the Experience Point rewards in play are. For example, the rock bottom minimum award for a failed adventure in which your performance was "abysmal" is 210 XP. (Well, assuming you roleplayed properly: "Hurl thy rock at yon hippogriff, Johan -- nay, it is impervious! Fly, comrades!")

In my high school D&D circles, it was pretty common for a first-level adventure to be a milk run for the sole purpose of bumping the characters up to a more robust level, while still technically "playing the game right". I'd be curious to know if a similiar practice obtained in Dragonquest circles. (Or, alternately, if people just said "Screw it, let's start everyone with 400 EPs.")

TFT: In the Labyrinth character

Here's Ur'Guh, mentioned in the video:

Breaking it out for reading, this is an orc character, therefore built just as a human, with base 8 in each score with 8 points to distribute. I give him Strength 11, Dexterity 12, Intelligence 9, defined as a "hero" meaning using the point-costs that wizards don't use. His Talents (costs in parentheses) are Warrior (2), Climbing (1), Axe/Mace (2), Knife (1), Whip (1), and Alertness (2). They add up to 9, his Intelligence score.

It's a very practical build, with 1 point of free armor and a bonus to perception. He's a highwayman by trade, which has the code 5/12 meaning he's got a good chance of losing the job due to some kind of disaster, but it pays really high. Assuming he has a week's pay to work with, he has a dagger, a small axe, a whip, and leather armor. The latter brings his Dexterity to 10 in combat - not great, but with Warrior, he's well-armored for a starting character.

I pay attention to the instructions to give him personality, and staying with the scope and general concepts in the example, he "wants the good life, thinks other orcs are stupid." I figure that'll be fun for a whip-wielding highwayman to be looking up the ladder, especially since I want to play him with plenty of sneaky orcish brutality.

I managed to dig up my SPI version of DragonQuest (box + 3 books) and the box had some surprises in it (apart from the books):

The hex grid is somewhere (but not in the box) and no idea where the cardboard chits are. I'm trying to remember if my set had 2D10 or 20 die-cut counters used as randomizer chits (in lieu of dice).

Most interesting is the light one of the articles shines on playing a mage, or rather, a non-mage, in DragonQuest. It's called The warrior alternative, from Dragon magazine July 1984.

That also helped me answer the question we had during the seminar "but how do you make a mage?"

The answer is, just do it.

The only limitation is that you need to have a high enough MA (Magical Aptitude) to learn all the Common Knowledge spells and rituals (and I guess the two counterspells) for a College (one spell/ritual = 1 point of MA), and you can only join one College. The disadvantages: magic is hard (low chance) in general, and the spell backfire is nasty. Some spells have a negative base chance.

The advantage of playing a non-mage is a +20 resistance to magic (and not having to use your time and XP to train spells), and you can have a low MA so you'll have more points for other stats.

What struck me is that there's no handy table for looking up the needed MA for each of the Colleges. You need to go through the book and count the spells/rituals.

The warrior alternative takes the rules for using DragonQuest characters found in the Thieves' World box set (Chaosium, 1981), written by Eric Goldberg, one of the designers of DragonQuest, and explains how to "balance" the non-mage a bit more in character creation.

I recognize the pleasure of

I recognize the pleasure of opening an old game box and finding all the supplementary and self-created stuff one thought was lost or forgotten. My original Cyberpunk box was like that, and in this seminar, you can see the sheets and notes practically fall out of TFT: In the Labyrinth when I open it.

I also feel a little less stupid in stalling out in my attempted DragonQuest character, but your description still confuses me a little. Is the idea that, as written in the core book, the starting wizard is over-powered? Because it doesn't seem very powerful to me, with one College ranked at 0 and possibly trading for Magical Aptitude by being tubercular and really clumsy, and all that backfire.

Clearly the game saw a lot of play. I would sure like to get into those memories from a lot of people one of these days. I was also intrigued by my brief look at The Enchanted Wood, which I have decided not to get and read because I'd rather someone else use it to GM a game I'm in, some time.

Herman, thanks for the

Herman, thanks for the details on magic. I was just about certain that was how it worked -- glad to have it confirmed.

@Ron: from reading the actual

@Ron: from reading the actual game text I think you're right, characters with magical abilities are not  much more powerful than non-mages, they just have more options.

But apparently some people thought that not playing a mage should get you something, as well as opening up a clearer option to add that option later on in play (to play a mage). Probably all that is not needed unless you play a campaign game of some length.

Just remembered I had this post sitting on my desktop all week, about a little research I did into the delightful art for this game:

Dragonquest cover artist Jim Sherman is a prolific illustrator and has a ton of his work history up on behance. I immediately took note of his work on DC Comics’ “Legion of Super Heroes”:

In addition, his work in comics is listed here:

The scenario pack "Valley of Mists" was brilliantly designed. There is a deep backstory to the relationship between the old noble patron and the big bad monster. I drew the relationship map implied by the well-described relationships between the NPCs and it was very clever. Lots of conflicting values between familialy-related charcters. I used it to run a Burning Wheel campaign for ... gosh close to a year and a half.

The system was shared by a pulp-fiction adventure game. "Daredevils." The scenario creation advice wasn't as good.

Thanks for watching this! I

Thanks for watching this! I am still envious watching Herman pulling out that Bushido box on-screen. I didn't know about the adventure. Would you consider an Actual Play post about the map and how things went in play?

Registration is live for July coursework!