How "right now" turns into what happened 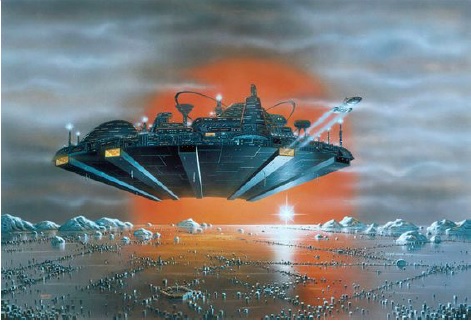 Ola Jansson has been working on his Compact Stories for a while, with plenty of playtesting and revision along the way. But it's hit that point I've identified as critical, when the design questions and the presentation questions are bleeding into one another. With any luck I can put some of the work of the past couple of years at this site to good use.

The game stands in a design space which may or may not seem to you to be thoroughly occupied already, in the vein of Universalis, but as I see it, it has more in common with the earlier, better versions of this design ideal - more about what we do with our starting tropes and notions, rather than what it (the world, the story) "is."

In tandem with Justin's Kinfolk, another interesting instance of two games in consulting with - if not actual similarity - certainly topics in common. I'm going to have to be careful to remember which thing I said about which game.

I was a little hesitant to post this session by itself because my take is that we barely started moving. Then again, Ola is at the point where he needs to talk his way through it and it strikes me that more than one person out there will identify with this.

If it seems like we're jumping in with a conversation already under way, that's true, because I played it a bit with Ola a couple of years ago, and I'm already familiar with the larger picture of play. You can see in our discussion here that I'd like to set that aside, let it be what it is, and move directly into what we do while the characters are doing things, preferably those things which cause and receive trouble.

We finish this session with a plan to play/dissect a tight and dangerous resolution in play, and so you know, we're using his trippy science fiction set - and if you can believe it, not because I picked that, but because it's the one set he has in English. Anyway, my little brain is currently very expanded via the games I've been playing lately, so this is right in the zone (although I may need some naturalistic play about ordinary people at a tea party and the butler's found dead, or something like that, pretty soon).

Now we get into it! The critical issue of whether a roll means "narrate a bit," so that eventually the GM decides when it's all over and how; or "get something done for good or ill" which does in fact contribute to the resolution of the situation we're in. Here's the direct link to the second session inside the playlist.

Just wanted to say watching these two sessions was very helpful in seeing how the different parts of a game interact, among other things. Great work!

Thanks Manu! I also just

Thanks Manu! I also just finished a consulting session which illustrated precisely the reverse angle: with smooth and ever-improving fight mechanics and instrumentation, but needing to look "up" to see whether changes in the characters and situations create new circumstances for later play.

I would love to know more

I would love to know more about the latter. If a system doesn't do that, then we have the situation you described in the video, where the GM gets exhausted by having to continually almost start from scratch each scene. So what in particular do we want from a conflict resolution system, such that it provides fodder for more play? If you've talked about this elsewhere just point me there :-)

I think I said quite a lot

I think I said quite a lot about that in these sessions, and the best place to go from there are the play-videos. Have you seen either the Sorcerer Musik or the first non-Glorantha RuneQuest games (both in early 2018) that I presented here?

Or wait - an even better idea. You should play Cold Soldier with me and we'll talk about it after that.

Sounds like fun! And no I haven't seen those sessions, I'll check them out when I can

I'd also love to know more about the "sneaking past the guard is the death of play" idea. I sense there's something quite important there for me to understand.

I'd like you to talk it through instead and see where you get. Maybe as a recorded monologue? That would be very easy for me to process and respond to, and we could embed it right here.

A recorded monologue? Well, why not :) I'm turning in for the night now, so I'll try to get to it tomorrow. I'll post a link here

Heh heh, be warned, you might regret asking me to do this :)

I'm sorry Manu, I can't make it through. I appreciate the effort, but I'd like to take this seriously as a discussion, and the cute soundtrack bits are senses-shattering and brain-maddening to me.

I did answer your question

I did answer your question seriously, the sound clips were just for fun. But here it is with everything funny taken out: M4A format

Thanks! (from my neurons)

Thanks! (from my neurons)

It's a wash-out, Manu. Your

It's a wash-out, Manu. Your opening paraphrase of what I think is "wrong" with it is completely mistaken. I did not say anything about "interesting"-ness, for example, and there's more than that, way more than I can struggle through.

Given that starting point, the rest goes down a road that isn't anywhere near to the issues I was raising.

Continuing here is only going to be a wrangle, so please don't. We'll have to start over some other time.

Well, that's a little disappointing. I would point out that, in this particular video, you didn't clearly articulate what issues you were raising - you just noted that the "sneaking past the guard" situation was undesirable and the death of gaming, and that's it - hence my original question in this thread. So all I could do was guess at what you meant. I'm confused what you were expecting me to do.

It's a flat failure, that's

It's a flat failure, that's all. You can call it mine if you want, just a bad idea for a possible dialogue that put you where you weren't sure what was up, and didn't go anywhere.

We have to stop now before it goes into emotional territory. I've hit a personal limit which is rapidly turning that way, and if that's disappointing, well, I am human, not an oracle or a public service utility.

Taking a break and de-stressing may work for me. If you're still interested in the topic, we can to find a different way at some future time. For now, I have to call it off.

Wrapping up the consult with new questions about constraints on actions, development of written material, and resources. Here's the direct link inside the playlist.

See here for as pointed and practical a discussion of resolution mechanics as you'll ever find anywhere.

I suppose I'm feeling like my old self again. I began my pitch for playing Undiscovered with a discourse on snake genitals, I framed a shower scene in Primetime Adventures, and here in our investigation of Ola's new resolution mechanics, I began with consciousness-raising robot sex.

Many thanks to Erik for joining us and to Ola for allowing me to share these recordings with you. I think they'll be a valuable resource for designers. The new session is here, linked into the playlist.

I was a bit frustrated after our session. As usual I completely underestimated the amount of time needed to really understand the effect of a game mechanic. I know that you have notes that you want to share with me but I have started to change stuff already even though I really think we didn't have the actual time to find all the good and bad things with it. I also have to remind myself that this particular part of the game design process is in the remake phase. The remake phase for me always has a really bloated and overcomplicated state before you find simplicity beneath all you "great" ideas.

Therefore I am removing stuff. Making it much easier to understand. You and Erik did not have time to even see how much I had written in the intricate google.spreadsheets. I on the other hand had the opportunity to understand how complicated my own creation hade become. I am applying machete hacks and slashes to my tables. But I am sticking with a lot of the core of the creation. Hopefully ending up in better design space.

I think this is excellent. I

I think this is excellent. I'm not a co-designer or co-author, so I don't need to know what you brought to the session, or even how it worked relative to your intentions. I'm happy to play my science sorcery sex character and trust the game design to your own experience. In fact, the worst thing I could do at this point is have an opinion or make recommendations.

Therefore my comments (in video #4 for this session) are not critique and "notes" in the usual game design or typical consultant sense. I hope you check them out.

Before the Campfire
Author: Sean_RDP
Department: Actual Play
I had an interesting experience this weekend at the scout campout I went on with my child. Some of...
Rule this
Author: Ron Edwards
Department: Seminar
I've run into a few conversational speedbumps lately, nothing adversarial, which nevertheless put...
Characteristics vs Skills in Runequest: Roleplaying in Glorantha
Author: noah_t
Department: Actual Play
I wanted to post up some probabilities for Runequest: Roleplaying in Glorantha. After I asked on...
The Shadow of Yesterday: NPC rolls
Author: Joaquin
Department: Actual Play
So, we had ended last session of our Shadow of Yesterday campaign on a cliffhanger: the villain,...