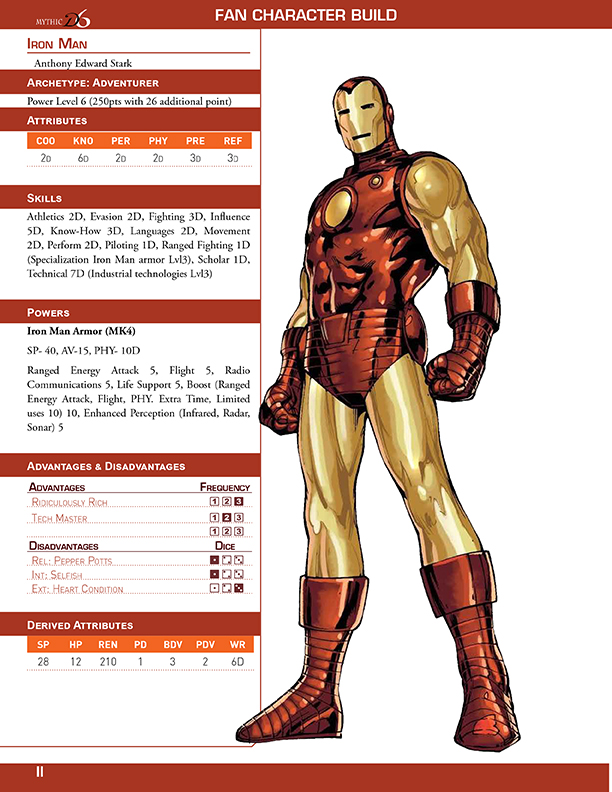 Below is this week’s build.

Which, who, and why

This brings up so many things.

First, "Iron Man" isn't a known quantity, he's a franchise commodity who's reshaped again and again, per company owner, per editor, per creator, per tie-in media, per actor (live or voice), et cetera. So this build isn't a representational act but instead a creative one. Which is good! It means we don't have to check this content against the "real" Iron Man, because there isn't one, and this one is as good, or significant, or valid as any other.

Second, the system is component-based, so there's no "choose armored guy" option in terms of a character class or similar defining categories. This is non-trivial, because you don't choose from available portraits but instead you arrive at a particular result through many choices. This is what I flailed a little in trying to say in my comment at your first Build post, with Tigra.

Where that takes me is to look at this Iron Man's situations: by looking at this sheet, what kinds of hassles and concerns "should" or "will" or "are expected" to occur in play? They could be either things that happen to him or things that he might be actively about to do. These things aren't all in the Disadvantages but the Disadvantages are definitely these things, so looking there first, I see the relattionship, the selfishness, and the heart condition. They all tie together pretty tightly, because the heart condition can render him helpless, which makes it pretty hard to sustain being selfish, especially when this framed in terms of how you're going to relate to a particular person.

Here's where I'm going: what you'd get if different choices had been made.

I am tempted, as I suspect anyone is, to cross-reference against the Iron Man(s) that I know from the comics, especially the one(s) that I like. For example, this one isn't crippled by alcoholism, nor is there a policy crisis based  on his weapons-manufacturing, nor is energy storage a concern in the midst of action.

Such talk is risky, though, because as I said, we should be looking at this as its own creative act and nothing to do with anyone else's preference or perceived essentialism for Iron Man. That's why such talk typically gets framed in terms of validity or fandom status, and usually devolves into accusations of misusing the game mechanics. So instead, I bring up alternatives not in terms of what would be a better (i.e. "my") build, but rather, whether the system as a whole offers the opportunity for differing interpretations.

Going slightly out on a limb, it seems to me that this Iron Man is pretty heavily influenced by the last decade of movies. Staying with that in order to avoid the "concept ownership" problems above, one might posit design experiments (and their backfires) with the armor, a couple of motivated enemies, or an uneasy relationship with the government. The build in that case would be most obviously different in terms of Disadvantages, but there might be some tweaks to the powers themselves here and there.

Well, who knows if I made sense. My intended point is that build, in these posts, is literally situational framing and dramatic prompting, and so a particular Iron Man build isn't about whether you got the power-blasts right, but about what kind of situations and interaction you want to play ... about what you consider important about Iron Man.

Sign-ups for Introduction to Design and Playing with The Pool are available!