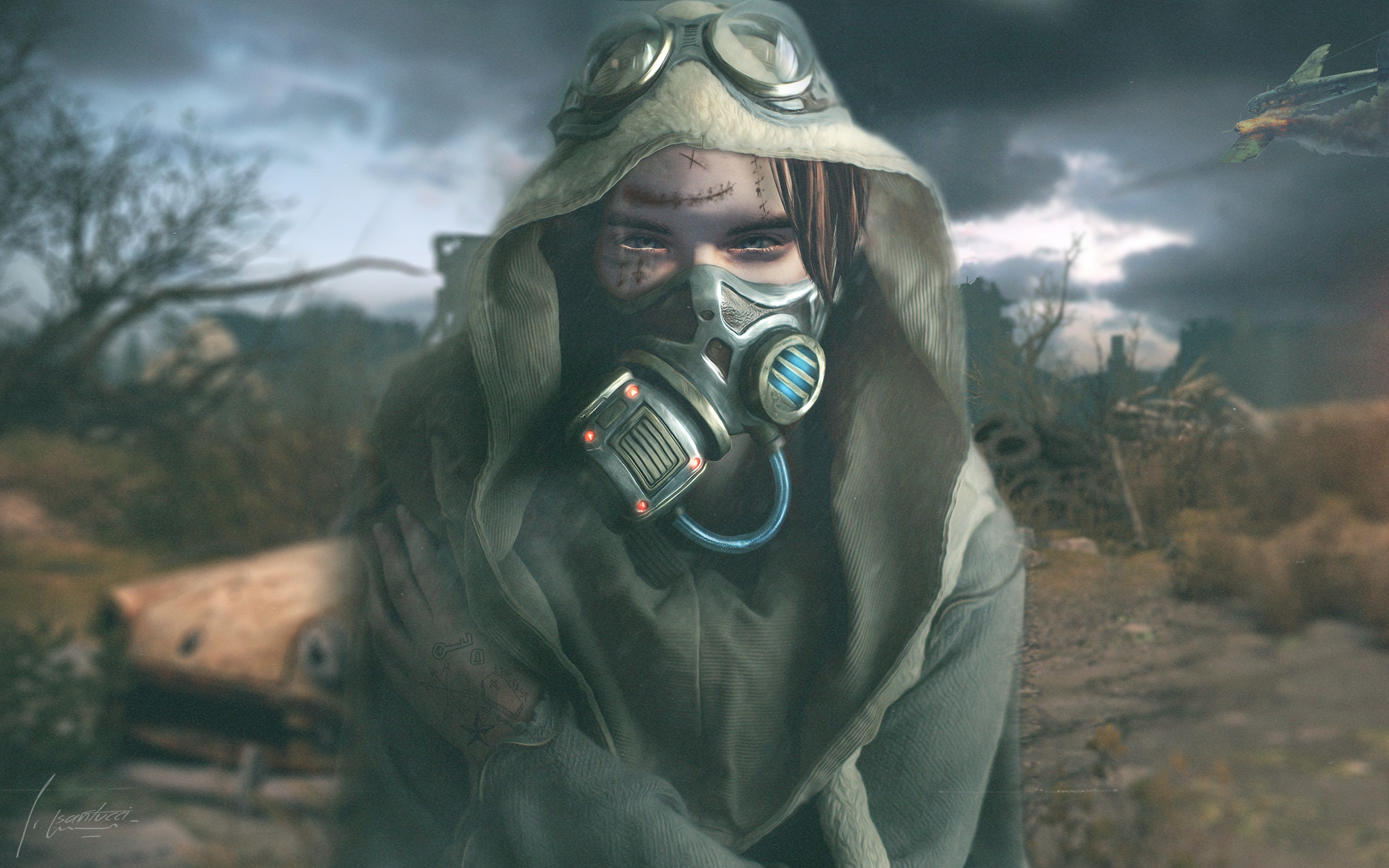 Very long time couple of non roleplayers friends wanted to play a rpg, and got into vampire with one of their friends, last year. I asked them a few month ago how it went. Julie, my long time friend, told me that she didn't like all the thespian show she had to do, to precise "I wanted to secude someone but she made me roleplay the seduction, and I'm kind of shy, so it was awkward and I didn't enjoy it", and he told me "I don't know, it was like playing in th GM's novel, well she can write her f*cking novel why did she need us for that!".

So I said "you know what, let's not play the thespian thing, I have a few games we can play that endorses agency, any kind of thing you want to play".  "Post-apocalyptic" said Julie.

So I considered it as an opportunity to get back to Apocalypse World with all those tools I learned from AdeptPlay, specially as a point of comparison with two Sorcerers games that I'm actually gming. As ron knows, I discovered Sorcerer through Apocalypse World, because Vincent has the honesty of quoting the sources of inspiration of the games mechanics and, well Sorcerer is half of that page, and Ron's game 75% of it. Whe I discovered, translated, tried to decypher and dissect Apocalypse World's text in 2017, I know I was thinking "Who's this Ron guy /What's this Sorcerer thing - I should come back to it". So I said, ok, let's try AW again now that I deconstructed my own view and unrooted implicit assumptions of fandom about it and that I feel able to evaluate how it plays after all those AdeptPlay course I've followed.

I must say I'm quite happy with it.

We discussed line and veils, with the description of "veil" being an opportunity to say it's totally ok to just describe what you're character is doing or what he is trying to say without actually finding and acting the proper lines.

We played 6 sessions and they loved it, and it's those kind of no lines no veil games swimming in each other's trust. Things I've noted:

-  It took Julie 3 sessions to realize that I had no plan for her and that what the NPC were doing had absolutly no relationship with "what the GM wants you to do". We actually had a discussion about that at the end of the 3rd session, and it kind of clicked with her at that moment. She was avoiding to do things like "How could I negociate anything with a gang leader, why would he care", the role of moves "you know rules are how you affect the fiction, you can just try to do it, we see if a mechanic applies, in this case Seduce or Manipulate someone, or even Going Aggro, or if I think he really has not interest, I will just tell you its reaction". Those self-containing behaviour are described here.

- After three session, Logan couldn't stop saying "Oh yeah that's want I wanted to do when I said I want to do RPG!". It may only be an insight about myself, but I was surprised. I mean, Logan played only one game of vampire before this apocalypse world game, and the second he played he knew, maybe practically but not theoretically, what was a good design for him. Let me alone a few minutes so I can mourn and reflect on my own painful years of deconstruction to arrive at that point.

- I'm really able to enjoy apocalypse world as it is and not trying to "defend/promote" the game as a solidified text. The game is clearly not perfectly designed. I don't think I wouldn't be successful to play it without techniques from Sorcerer, or reflections and playing "The Pool" - aka. looking at where the system fails and finding table solutions (such as the ordering of actions, in which I apply a solution inspired from Trollbabe).

- I'm totally transparent about the MC rules. At session 3 I explained the threat moves and how I'm supposed to use it, how I prep between sessions by making threat, giving impulses, designing clocks, etc. I think that's when they really clicked with the idea that I'm not controlling the story. In other words, understanding the MC's job (I mean, its specific tasks for this specific game) facilitated the trable trust. Knowing each other's jobs and instruments of fiction change was important.

- It took some adjustements. After the first session, Logan's character was a sociopath cult leader whose followers sacrificed their relatives, Julie's character were a lonely savvyhead who doesn't care about anybody or anyone. Before the second session, I had a conversation with Logan about what I need, as a MC, to make the game - I can't play meaningful NPC because it doesn't make sense, socially. It went quite well, Logan thanking me for the feedback and revising the character's relationship with his followers. I talked with Julie about the fact that the Savvyhead would not have intrinsec conflicts and that nothing will happen if she doesn't fix her own goals. After the second session, without me saying anything, she said that the game would not be interesting if her character doesn't care for anything, and she revised the way she played.

I was surprised at my won enjoyment of playing Apocalypse World with them. The game was full of bounce, specially when threats designed independantly with their own custom moves were brought together in the same location and I had to evalute how their own custom rules and impulses interacts.

The I had to make a decision, and I think everyone at the table was like "whaaaaaaaaat".

That may be my last realization, in relationship to my previous Sorcerer post. I can't stop seeing bounce all around the game that are not related to stochastic procedures. Of course, stochastic procedures are desirable and bouncing, but I can't stop seeing now whenever bouncing appears that are coming from other properties of the game. It may be a paradox, but thanks "Numeracy" for that!

This sounds great! Kudos on selecting an apparently appropriate game (I have no experience with AW) for these non-gamers and running it well, with everyone enjoying themself.

I'll be wrapping up this game

I'll be wrapping up this game soon, and will propose them three very different games: Lamentations of the Flame Princess, "here and now normal" Sorcerer (which I think would be the best for this group, specially as they tend to play weird fucked up characters) and maybe a Sword & Sorcery The Pool or a Vance/Anderson Traveller inspired game.

I am on the verge of running a game for some crusty punks who've never played role-playing games before. We haven't chosen a game yet. I have a short-list of games I'd like to run but I know there are two things I want to avoid: pitching/explaining a particular game system or presenting a menu of options ("pick something off my bookshelves that looks cool!"). I'm hoping it is as easy as when Julie said "Post-apocalyptic".

Something else I really appreciated from the post is how these people with little or no experience had an adverse reaction to the thespian show and GM novel. It's also interesting that once having been exposed to that, it took a few sessions to break out of it. But they did! It really is an uplifting post, thanks for sharing it Greg!

I have observed the same -

I have observed the same - the point that newcomers to role-playing are not eager-slash-grateful to be "run" or taken care of in any way - consistently for four decades. It's counter to constant claims I run into, lately quite a bit here in Sweden, that newcomers and children need such guidance and paved-out paths for play. I really think they don't.

1. Reflecting on it, there was a specific moment where it clicked for everyone that "this is the activity we came for". At some point, Logan's character, a Hocus, try to intimidate a captured weird Apocalyptic Witch, leader of a gang - a real badass vilain. He fails and I say, as an answer, "Ok, you say your thing, and she answers with the coldest look you can imagine, just saying 'hit me, and all the people you love will horribly suffer. Logan, uncheck your Weird - you will not gain improvment for using it for the this session". At that point, he looked at his sheet, smiling, erasing his check, and saying "fuck fuck fuck this is so cool", cheered by Julie.

2. I forgot my notes yesterday, and had a very hard day at job (I'm working in a Social work institutions, and sometimes institutions fails and get very violent to people, and I'm pissed off). I needed to vent this and I had no notes about custom moves, threats, etc. So we started talking about Sorcerer. Just me saying, "this is what we play", "this is what Sorcerer can do", "this is what a demon is - a need, a desire, powers". They were incredibly excited, so much that we ended up deciding the two statements (Brussels here and now, and "Sins and Amethyst"). Seems that we are going to wrap up this AW game and threw ourselves in Sorcerer.