Punching Cosmic Nazis or Do you Know The Way To Danzig? 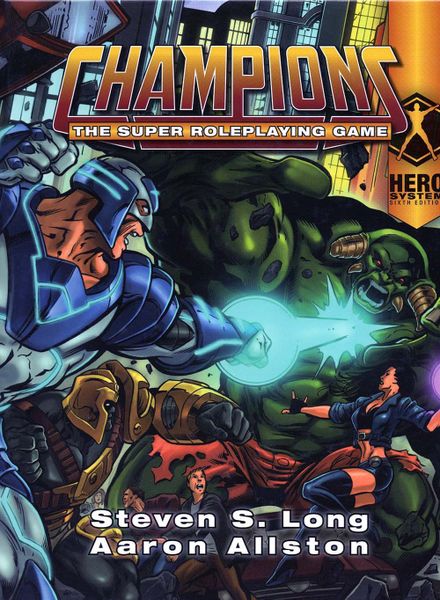 About a year ago a friend of a friend began running a Champions 6th edition game unofficially called Stemming the Tide. The game is set in the months before WWII breaks out and began in San Francisco. Currently we are on a capture German Type 7 Uboat in the Baltic, having escaped Danzig with some refugees. The game began a month or so before myself and others joined and its been going strong.

The game is decidedly pulp, which is not my preference but that does not make it un-fun. The GM has a light touch and knows their Champions and their comics pretty well. In fact I am the least knowledgable in comics lore among the group, which is affecting my enjoyment in this game and a wider context.

I want to talk about the game itself, but there will be a fair bit of discussing my Champions experience over all and a bit of re-thinking what is or was one of my favorite flavors of TTRPG.

As I said the game begins in 1939 San Francisco, where three of the heros have already been established. Dr. Schwartzkopf

is the enemy of the hero Dr. Power, a super-genius with a power suit and some great pulp inventions. Dr. Power’s initial allies are The Banshee, who has some flame and sleep bombs and a scary appearance (I think), and The Infiltrator who has the ability to talk his (their?) way into or out of anything as well as being a master of disguise. They came across some irregularities with the local German-American Bund and began investigating the goings on. Schwartzkopf made an appearance but would not appear again until recently.

Into this hot mess comes AG, an English (Imperialist) swimmer and boxer and doctor who has been living in Africa, where he learned some local secrets. There is Lash, a German ex-patriot from Danzig who does not like Nazis and is part of a Polish / German underground. Finally comes my character. Myself and the Infiltrator like the same Canadian girl (and have a minor rivalry), but Geralt(hard G) is a master Tracker an who doesn’t need one of those? I have sharp knuckles for punching, keen eyesight, and I regenerate BODY at a fast rate. I am also from Canada, and I am known by the locals as, The Badger.

Our adventures take us into the heart of America’s Nazi problem and we discover some super-science happening here as well. A formula that transforms people into powerful reptiles. A strange artifact that can cloud minds and put thoughts into heads. Plots to blow up American ships, bases, and science stuff. Eventually we board a ship for Europe, where the artifact is seeking to go home into the deep sea. We manage to avoid that, foil some killers and agent provocateurs, and board a U-boat that had been tailing us. Some of the officers were good Germans, but bad Nazis so we recruited them to help us. We did bury the artifact in Glastonbury I believe, away from the sea and prying eyes.

We made it to Danzig a few days before the shooting starts. We help the locals, find more cosmic Nazi-shenanigans, and eventually take on Dr. Schwartzkopf who has taken Dr. Power’s designs and upgraded them. After a tough fight he bolts and we head for the coast. And now, we are on the road to Amsterdam via Sweden and Norway as the larger war is about to start. The GM and players have done our best to keep aware of how our actions might affect actual history but not gotten too bogged down in that.

I have played a couple versions of Champions, 4th and 5th I believe, which were the Hero System I suppose. While I enjoyed those games and navigated the system well enough, I have never been the most deft with the rules. Everyone is always better than my character, even when I let the GM do all the work. I will have a character full of exceptions, yet my Endurance goes away and my punches are not that punchy and why am I playing this game again?

When building The Badger I kept that in mind. He is not perfect and still goes down a little fast for my taste, but I am relatively solid in combat. The GM gave each character a skill that they never(rarely) have to roll for; it’s the thing we are known for. For Badger it is Tracking. None of these noted abilities has been game breaking. One interesting rule change however, is that the GM has forgone Endurance for the heroes and villains. That means we can go all out and not count the endurance. The fights are short and brutal, which they might be anyway even if we were keeping count of endurance.

I did not collect comics in coherent ways growing up. Fridays we’d go to the store and dad would be each of the kids a comic. Then we would share them around. I remember liking Iron Man the most, my first Green Lantern was John Stewart in a team up with Superman. I do not even remember the name of the issue but I think it was a Superman comic. And Stewart has always been my favorite Green Lantern even though I was never a big Green Lantern reader. I enjoy reading comics, but mostly as one off moments and adventures with some connection between them, because that is how I digested comics as a kid. And more, we would get comics that were not your normal superhero fare.

So, when the 90s roll around and I am reading (and enjoying) Martha Washington Goes to War, I am wondering why I cannot have a game like that? It’s one reason I embraced Aberrant, despite its issues. Gritty and mean spirited. And then the 2000s come and Justice League and Justice League Unlimited, which have grown out of Batman and Superman shows, are amazing. I am consuming superheroes in different places, almost like a kid discovering them. But the stories are often different than what is considered the golden age of superhero comics.

The point is, I realized when we took the Nazi U-boat with utter ease that the game, I had in my head is vastly different than the one everyone else has. And in Champions for me, there is a disconnect between punch thrown and punch landed. Somewhere in the middle of an awesome strike it transforms into something banal. Somewhere in those moments the fun spills out.

It is a combination of my golden moments being different than others and trying very hard to master this game that so many adore. But I am just not managing to do it. If there is a lesson to be learned, I think that it is we need to align expectations when we play. Misalignment in this case is on me, not blaming but recognizing I needed to speak up. However, looking with a critical eye and realizing some of this has helped me enjoy low-rent Wolverine as a character in the fiction, if not necessarily as a box of tools to engage the fiction with.

I am sorry to have to link-and-run, but until I get the chance for more, I think this blog post from a few years ago is relevant: What does this power do?

Absolutely useful for at

Absolutely useful for at least part of my dilemma. I am going to speak to the GM about the idea of turning Badger's various abilities into a VPP and see if that provides a more satisfying tool box for me to play with/ Looking forward to any other thoughts and comments. Thank you.

Uh oh. I mean, I hope that goes well. I didn't intend it as a specific rules recommendation.

I know you did not, but it

I know you did not, but it occurred to me that the idea had merit in my specific case. He and will discuss it and see where it leads.