Cthulhu called – was the keeper happy? 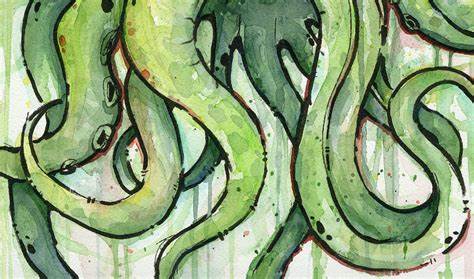 This was at a small convention some years ago (between 3 and 6, I would say), in the middle of nowhere, Finland. The game master and the other players were all strangers to me. There was maybe three or four players. I went in to fill the table, anyways, as I did with Savage worlds in the same con, too.

The game was Cthulhun kutsu (a translation of what the name implies) or Call of Cthulhu, I don't remember anymore and I don't know if the edition was even named. We were of the coast guard (maybe somewhere in USA?) and there was a ship that did not react and might be just floating, not steered. We are to figure out what is happening.

Knowing that there are many ways to play Cthulhu, I asked the game master if we (as players) should be trying to complete the mission, first and foremost, or if we should be playing up all the horrors and how real people would react when facing such. The latter was the answer, but not said with confidence. This was what I guessed, since the Finnish rpg scene has been very partial to character immersion and such matters, presumably due to the connection to the Nordic larp scene with similar emphasis.

We went to the ship, communications died, the ship seemed empty, we poked around a bit, saw a human figure, there came tentacles that hit someone who failed rolls and was obviously (to the players, not the characters) infected by them. My character failed their sanity roll and there was a random roll of insanity; I get something to the effect of delusions or paranoia or combination thereof, so gleefully started playing that my character saw the others as faceless humanoid tentacle monsters, too. I escaped to a life boat, tried to hide there, kicked the others and threatened them with a flare.

The game master seems a bit frustrated over the course of events and has my character fall unconscious by fiat as some kind of beam hits her head. As befits the situation, I don't remember much about the rest of the game. It ends with the characters in a life boat, with some tentacles rising from the sea. We thank the game master. There is some after-play talk and the game master says something to the effect of having hoped that we could defeat the thing. Well, that is precisely what I asked at the very beginning, now wasn't it? The game was okay by my standards, anyway, but the game master felt a bit disappointed.

Convention games are adventures in their own right, never knowing who will show up. And that is exciting, but it can lead to games not going the way everyone wants. Was the adventure a published one or one the GM had written for themself?

I remember no discussion of a

I remember no discussion of a published adventure, so I guess it was custom.

I wonder if that had

I wonder if that had something to do with how they characterized play for the adventure.  Really just speculating on my part.

But an adventure I write for a convention is going to be personal and I have a personal stake in people liking or enjoying it. That can affect GM behaviors.

I say that especially as I am currently working on 2 adventures for 2 upcoming conventions and trying to apply good design ideas and also form a certain emotional distance from them.

Try so succeed, but embrace failure

I sympathize with your question to the GM, and think it points to a possible problem with CoC or a certain type of RPG culture.

In the CoC adventures I've played and run (many years ago), the GM expected the players to struggle … and then gracefully accept and even enjoy defeat.

So you try to complete the mission and experience growing dread at the futility of your efforts and approaching loss of  control of your PC (when he goes technically insane and becomes an NPC -- though I don't remember if that's what the rules actually say).

I'm neither defending this set-up nor saying there is no other way. Apparently, this GM expected you to try your best and was willing to let you succeed -- or fail (which I find commendable) and presumably had an appropriate scenario.

As for his answer, my guess is that he did not want to be tagged as not being into 'proper roleplaying' (portraying various emotions like panic, not going for optimum tactics etc.).

It might have been that I overplayed the character's delusion and thereafter their will to just leave the situation.

I think the game master did not use force, aside from having my character go unconscious by fiat, but that was to retain party unity (essentially), so qualitatively different from forcing a certain outcome in a traditional party-based play paradigm.

Legendary Lives: Drowning Can Be Fun and Other Observations
Author: Jon Hastings
Department: Actual Play
Our Legendary Lives game continues: we're up to 12 sessions. Session 8 turned out to be the climax...
Monday Lab: Whoops
Author: Ron Edwards
Department: Seminar
A big lab this time on a big topic: failed resolution, of any kind, for any given set of rules....
Runequest: Roleplaying in Glorantha Character Creation as Play
Author: noah_t
Department: Actual Play
I'm contemplating a game of Runequest: Roleplaying in Glorantha. The core book alone is vast, a...
Cthulhu called – was the keeper happy?
Author: Tommi
Department: Actual Play
This was at a small convention some years ago (between 3 and 6, I would say), in the middle of...